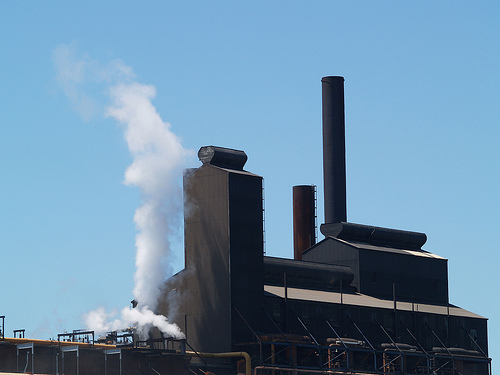 Homeowners have been buttoning up their windows and doors. Businesses are installing LED lights. But what role should manufacturers play in the effort to conserve energy?

That’s the question industry officials, utility companies and policy makers are asking as the manufacturing-intensive Midwest seeks to regain a competitive edge in the global market and build a stable economy for the long term.

While energy prices in the Midwest are below the national average, researchers and energy efficiency advocates say efforts to promote conservation will play a key role in rejuvenating the region’s manufacturers and insulating them from future hikes in the cost of energy.

The question now: What’s being done to make it happen, and what are the challenges that have to be overcome in order to make progress?

Researchers and industry leaders say energy efficiency efforts have been slow to materialize for a host of reasons, both logistical and financial, that don’t exist in the residential or commercial arenas.

Costly equipment, workforce training and the inability for a single policy to address each company’s needs are among the unique challenges that have to be addressed.

Despite the obstacles, there is a belief that the issue is moving to the forefront as utilities look to meet new efficiency targets that will be difficult to reach without addressing their biggest energy users.

Companies are also facing new environmental regulations that could force them to replace aging equipment with new high-efficiency models, and are increasingly looking for ways to cut operational expenses.

A new report from the World Resources Institute, a Washington D.C.-based non-profit, is also providing policy makers for the first time with a state-by-state look at the way industrial actors use energy in the Midwest, which authors say they hope will provoke action on the issue.

While the industrial sector collectively uses a third of all energy in the United States, WRI’s report, released in February, provides a first-of-its-kind estimate of how much energy is being dedicated to the production of fuel, chemicals, metals, paper and other products across the Midwest.

The analysis showed that manufacturing accounted for nearly a quarter of the energy consumed in Ohio, Indiana, Iowa, and Wisconsin in 2006. Among the ten states included in the study, South Dakota devoted the least amount of its energy to manufacturing, at 5 percent.

“This paper is really just a snapshot of where industry is and where it has been,” said James Bradbury, a senior associate at WRI’s Climate and Energy Program who served as the report’s lead author. “The future work is where it is going and where policy can take it.”

The Midwest is in many ways an ideal place to make a concerted effort to take on the issue of industrial energy efficiency.

Nationally, manufacturing accounts for 12 percent of GDP, and employs around 12 million people.

While the numbers have waned as manufacturers have moved abroad, officials believe the industry remains strong and could begin to grow again with the right kind of investments, providing a lasting economic boost to the region.

In that context, Bradbury says a broad spectrum of players in the Midwest – labor groups, industry leaders and politicians – have coalesced around the issue.

The Midwest Governor’s Association has already formed a group to look into the issue. The group hosted a summit in January featuring industry leaders and policy makers and supported WRI’s recent analysis.

“There’s a lot of interest in seeing these plants stick around because they’re real anchors in their communities,” Bradbury said. “People are looking for ways to make sure moving forward these places can continue to operate.”

Several policies are already being pursued that could help in the effort, too.

Lawmakers in Ohio, a state with a $7.2 billion a year steel industry, are considering legislation that would allow blast furnaces and cogeneration systems, which use waste heat to create electricity, to count as renewable energy.

The designation would allow companies to sell renewable energy credits, reducing the amount of time needed to recoup investments in such technology. The effort – driven largely by the potential operators of a proposed $310 million power plant at a steel factory in Middletown, Ohio – has been opposed by wind and solar developers who feel it will detract interest in other forms of renewable energy.

Still, Daniel Trombley, a senior industrial analyst with the American Council for an Energy Efficient Economy, said businesses have been slow to act because of the region’s relatively low energy prices, and that there is still a substantial amount of progress to be made.

“There have been some decent successes, but obviously there is still a lot more to be done,” Trombley said. “Some states are just scratching the surface and others have done nothing at all.”

Whatever intentions policy makers and industry officials may have, cost may prove a significant barrier for manufacturers looking to move aggressively in the direction of energy efficiency.

Installing new boilers, high-efficiency motors, and fixing leaks all pose challenges to manufacturers who are operating on tight margins and have little money to invest.

“You have to remember many of these people are independent operations with a small amount of cash, so they have to be very judicious in how they use their resources,” Paradis said. “They’re protecting themselves now, and they’re waiting until things break down instead of investing earlier.”

To help, policy watchers say state governments, as cash-strapped as they are, could set aside bonding money or create revolving loan funds to help businesses cover the upfront investments needed to make efficiency improvements.

Self-direct programs that allow businesses to opt out of utility surcharges by making direct investments in their own efficiency measures could also play a role in paying for upgrades.  Xcel Energy– seen as a leader in the industrial efficiency field – recently introduced such a program in Minnesota.

Businesses say the most helpful form of assistance, though, may be outright cash or refunds.

“You can get low-interest loans anywhere now,” said Kevin Schmidt, the director of public policy services with the Ohio Manufacturers’ Association. “You’ve really got to get the grants so you can find the big projects that are like pipe dreams with five-year paybacks and get them down to three-year paybacks.”

Xcel Energy, seen as a leader in industrial efficiency, is doing some of that in Minnesota, where 85 companies have participated in a three-phase industrial efficiency program. The utility offers a free evaluation and rebates of up to 60 percent of the difference between traditional equipment and the energy efficient model to participants.

The analysis often leads company leaders to unexpected findings about the way they do business – highlighting everything from leaked air to employee behaviors like leaving lights on – said Kerry Klemm, a product portfolio manager with Xcel who focuses on industrial energy efficiency.

“It’s fun to see the way people change the way they look at energy and no longer see it just as an assumed cost,” she said.

Promoting industrial-level energy efficiency is also challenging because it is such a diverse field, encompassing everything from ethanol producers to steel makers.

However well intentioned, the wide range of applications makes it hard for a national program – like the Advanced Manufacturing Partnership, which calls for a $120 million investment in industrial energy efficiency – to be successful, said Paradis, of the MEEA.

Instead, she said programs have to be built as locally as possible, sometimes tailored to the individual business itself.

“The key is to really understand that any kind of outreach has to be done individually, plant-by-plant,” Paradis, said. “This is not something where we’re going to be able to do a blanket policy and everything is going to change.”

Industry-specific needs include workforce training and equipment installation, which can sometimes cost a company more than the equipment itself. Companies also need help coming up with contingency plans that can be enacted while equipment is replaced, so production isn’t disrupted.

In some cases, “this equipment has simply been left on for 15 or 20 years so if you don’t have a solution ready to go when you shut that thing down, you’re locked out of savings for years and years,” said Trombley, of the ACEEE.

Whatever the challenges, efficiency advocates say investing in plant upgrades is both necessary and inevitable if the Midwest’s manufacturers are to last well into the future.

And while energy prices are low now – around 40 percent of the energy used by manufacturers in the Midwest comes from relatively cheap natural gas – there is an acknowledgement that that is unlikely to continue for perpetuity.

“Rising energy prices are going to be more successful than any program government can come up with, but that’s not exactly the most desirable way to get things done,” said Schmidt, of the Ohio Manufacturers’ Association. “The question is how do we get people to do it and do it with low energy prices?”