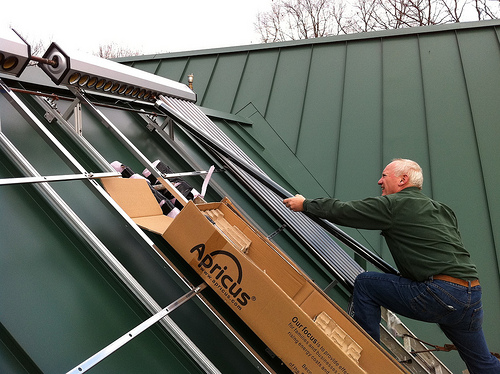 (Photo by madjalapeno via Creative Commons)

Before Dan Williams can start a job, he needs to wait in line.

Williams is an owner and installer with Twin Cities solar company Powerfully Green. For every project the company takes on, it needs to first get a permit from the local building department — a chore that can take hours or weeks depending on the city.

The time and money it takes installers to file for local permits is estimated to account for up to 20 percent of the cost of a solar installation. A January 2011 report by SunRun pegged the cost at about 50 cents per watt, or around $2,500 for an average residential system.

Solar advocates see an opportunity to make solar power more competitive by bringing down those “soft” costs associated with permitting, and that’s led to a national effort in more than two dozen cities to inject more convenience and consistency into the process.

The fees and requirements vary from city to city. Williams says he might pay anywhere from $200 to $1,000 for a similar project depending on the city. What’s more frustrating is when demands change depending on which employee is working the permit desk, he says.

Overall, though, Williams sees the process improving, especially in Minneapolis and St. Paul, which recently introduced a checklist for residential installers that, if completed, promises to get installers in and out with a permit in a single visit.

The two cities have also spent time training their permitting staff so that they are better prepared to handle solar requests — which can be a challenge considering they make up just a tiny fraction of the thousands of applications the offices process each year.

Williams says both cities’ staff is now more helpful and consistent, and expectations are more clear.

“Knowing what they’re going to require ahead of time lessens the number of trips I have to take down there,” says Williams.

Gayle Prest, sustainability manager for the city of Minneapolis, says she believes the city now also has the lowest solar permit fees in the state — less than $300 for most residential projects. (The city only counts the cost of labor, not materials, in calculating the charge.)

The Twin Cities aren’t the only ones trying to streamline solar permitting. In December, the U.S. Department of Energy as part of its SunShot Initiative announced $12 million in funding for 22 regional teams with a challenge of cutting red tape for solar installers.

In Wisconsin, the cities of Madison, Milwaukee and Marshfield are looking for opportunities to standardize their solar permitting rules in hopes of coming up with a model that can be adopted by cities across the state.

“It’s really a matter of [addressing] inconsistencies that an installer might experience,” says Bryant Moroder, program manager for the Grow Solar Wisconsin coalition that received the DOE grant.

The group is also planning a one-stop web portal where installers will be able to look up rules and key contacts for each municipality.

Chicago received a DOE grant to expedite its solar permitting process with online application and education materials. The group receiving the grant includes the city’s environment department, an Illinois Institute of Technology center and the Environmental Law & Policy Center (ELPC is a member of RE-AMP, which also funds Midwest Energy News).

Madeleine Weil, a senior policy advocate with the ELPC, says currently solar projects in Chicago require a lot of phone calls and trips to City Hall. Costs range between $3,000 and $8,000 with anywhere from a 45 to 75 day wait.

“Obviously there’s a really big range in both of those numbers, which is an indicator that it’s not particularly consistent,” says Weil.

Solar permitting costs have grown on the industry’s radar in recent years. With the price of panels falling, permits’ share of projects’ final price tags has grown in comparison.

A DOE-funded organization called the Solar America Board for Codes and Standards issued a set of recommended practices for solar permitting in October 2009. (An updated version was released in October 2011.)

SunRun, one of the nation’s largest solar installers, made the case for reform in a January 2011 report. It claimed cities were subjecting installers to inconsistent demands that didn’t improve safety and arbitrary fees used to plug budget holes.

Left unchanged, permitting costs would amount to a $1 billion tax on solar over the next five years, the report said.

A report last month by the Institute for Local Self-Reliance identified permit reform as a way to accelerate grid parity.

Permits a part of the business

Ralph Jacobson, a St. Paul solar installer who founded Innovative Power Systems in 1991, says there’s room to standardize the process and educate people on how it works, but some inconvenience is just a reality of the business.

“A lot of people who get involved in solar are doing it not because they have a lot of construction experience but because they want to save the planet, and then they find out what kind of hoops there are to jump through, and they’re not happy,” says Jacobson, who previously worked as a home remodeler.

“They have to vet you and your project and that’s all there is to it,” he adds.

City inspectors are there to protect homeowners, but they play an important role for the industry, too, Moroder notes. One bad installation and critics could frame the issue in the media as an industry-wide problem.

“We have to find that balance, where we can continue to meet the threshold that’s important for the public’s health and safety,” says Moroder, “but also not put in place such heavy regulations that result in a permitting process that adds significant burden and cost to the homeowner.”

Moroder and others hope the federal red-tape challenge can help find that balance over the next several months.

Meanwhile, a U.S. Senate bill, S. 1108, introduced last year would provide funding to replicate the most successful elements of the program nationwide.

For Williams and other installers, that may one day mean more time on the roof and less time waiting in line.