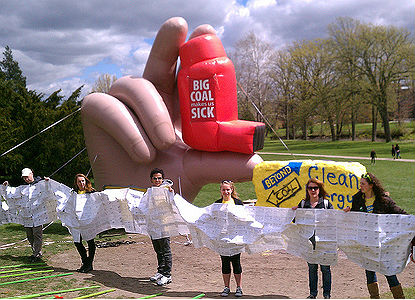 Michigan State University students hold up petitions calling for clean energy and not coal on campus at a rally on Wednesday. (Photo by Kim Teplitzky / Sierra Club)

The Missouri University of Science and Technology in Rolla was founded in 1870 as a school of mining and metallurgy, supporting the Ozark region’s lead and zinc industries.

Next week, school officials will celebrate the start of a new chapter, one that involves extracting heat from the ground rather than minerals.

Missouri S&T will break ground Tuesday on a $32 million geothermal energy facility — a system of wells and pipes that will provide heat to 15 buildings, as well as chilling for the campus’ water system.

The project, which will replace an aging coal-fired steam plant, is expected to cut the school’s energy consumption in half and reduce carbon emissions by 25,000 tons a year.

It’s one of twenty victories the Sierra Club is counting as part of its Campuses Beyond Coal campaign, in which student groups have put pressure on administrators to shutdown coal-burning power plants (the Sierra Club is a member of RE-AMP, which also publishes Midwest Energy News).

A dozen Midwest universities have recently committed to phase out coal-burning power plants on their campuses. They include schools in Ohio, Illinois, Minnesota, Missouri, and Wisconsin.

At Missouri S&T, it wasn’t much of a fight.

Graduate student Eric Farrow led a brief campaign in late 2010 that involved tabling and a petition drive. But by then, administrators had already announced plans to replace the coal-fired power plant with a geothermal facility. All that remained was for the school’s governing board to approve bonding money, which it did in November 2010.

“It was more of a showing of student support for the administration’s decision,” says Farrow.

Ted Ruth, the school’s director of design construction management, says several factors were behind the decision to mothball the coal- and wood-burning campus steam plant. For starters, it’s old, inefficient and in need of about $26 million in deferred maintenance.

“We’re trying to stay ahead of that curve,” says Ruth.

Sustainability concerns played a role, too. In addition to energy savings, the school expects to conserve about 8 million gallons of water per year using geothermal instead of steam heat.

Missouri S&T’s campus was built around the coal plant, which sits right in the center of it. Crews will remove the coal yard, elevator chute, and other pieces of the plant, but no decision has been made yet on how to repurpose the building, says Ruth.

“No coal plant I know is aesthetically appealing,” he says.

The geothermal project is expected to be completed in 2014. The school also plans to increase its reliance on natural gas in order to fully replace the energy it currently gets from the steam plant.

A mix of solutions

That type of hybrid approach is a pretty common one for schools that are working to phase out coal on campus, says Kim Teplitzky, a national press secretary for the Sierra Club campaign.

When the campaign began in September 2009, the organization identified 60 schools with coal-burning power plants on campus. It’s worked to organize or support student groups at each of those schools to encourage administrators to shut down the plants.

“Really the pitch is about leadership, it’s about preparing students for [clean energy] jobs, and about saving money in the long run by investing in clean energy solutions,” says Teplitzky.

So far, about a third of the schools on its target list have committed to phase out coal. Some have done so simply by switching to natural gas. Others have pursued major renewable projects.

Eastern Illinois University celebrated the opening of one of the country’s largest biomass facilities last fall. The Renewable Energy Center includes two biomass gasifiers and are expected to reduce the school’s annual carbon emissions by about 20,000 metric tons.

Other schools that haven’t signed the pledge are also moving forward with renewable energy projects, including Ball State and the University of Toledo.

Many of the early pledgers were, like Missouri S&T, already predisposed to moving off of coal. “The ones that are left are going to be the tougher campaigns,” says Teplitzky, citing Southern Illinois, Carbondale, in the heart of coal country, as an example.

A two-story-tall inflatable inhaler went up this week at Michigan State University, where students demonstrated Wednesday against an Energy Transition Plan they say is inadequate.

MSU Beyond Coal says the document, which calls for an eventual transition to 100 percent renewable energy, lacks concrete benchmarks and ignores the urgency of retiring the campus coal plant.

“We feel that there is a lot more potential to be more aggressive and use resources that are here now,” says sophomore Mollie VanOrsdol, one of the group’s organizers.

Environmentalist Bill McKibben spoke at the school this week to support the student group’s cause.

Michigan State’s board of trustees is expected to vote on the energy plan at its monthly meeting today.

Update: Michigan State’s board of trustees Friday morning unanimously approved the school’s Energy Transition Plan, which calls for the university to use 40 percent renewable power by 2040.

The MSU Beyond Coal student group issued a statement after the vote:

“We’re really disappointed that the board chose to move this so-called plan forward even though it lacks innovation, real clean energy goals or a plan for retiring the dirty coal plant on campus,” said student Talya Tavor. “This could have been an opportunity for MSU to be a national clean energy leader, but instead the transition plan simply puts off any real investments or dedication to clean energy to an unknown future date with no accountability.”