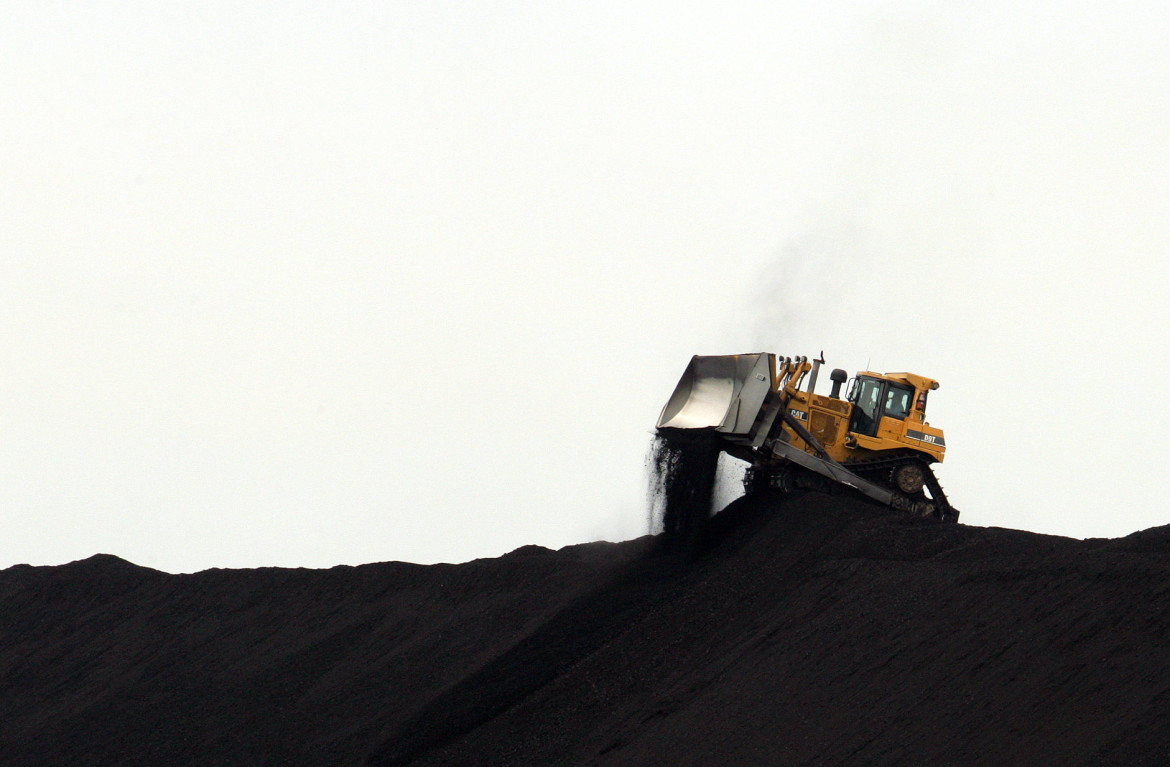 To Indiana attorney Jerry Polk, a New York finance company’s proposal for a coal gasification plant in Rockport, Indiana, is “like a bad zombie show.”

“It refuses to die,” Polk said. “Just when you think you’ve won and daylight’s coming, there’s another wave of zombies.”

For more than six years Leucadia National Corp. has been trying to build a plant that would turn coal into synthetic natural gas (SNG) to meet about 17 percent of the state’s residential and commercial needs.

This and several other coal gasification plants were proposed in the Midwest and Southeast over the past decade, when natural gas prices were high. The plants planned to sell synthetic gas through long-term contracts at a fixed price to utilities, providing a hedge against volatile and potentially rising gas prices while creating a lower-emissions option for coal.

Now that natural gas prices have plunged, many utilities and consumer watchdogs say the coal gasification plants make no sense.

But the Rockport plant is moving forward with support from Gov. Mitch Daniels and other political leaders. Opponents are fighting back, calling it governmental interference in markets and an injustice for ratepayers. Three citizens groups are appealing the deal in a case that Polk thinks will end up in the state Supreme Court.

Utilities walk away, state steps in

In 2008, utilities withdrew from a plan wherein they would sign long-term contracts to buy gas from the proposed Rockport plant and pass the costs on to consumers. In 2009, Daniels signed legislation promising that the Indiana Finance Authority (IFA) – a state agency – will buy the plant’s gas at a fixed rate and resell it to utilities and other users on the open market.

The legislation commits the IFA to buy the plant’s synthetic gas at the fixed rate for 30 years. If that proves more expensive than natural gas on balance, Indiana Gasification will pick up $150 million of the difference and ratepayers will absorb the rest, paying through a line item on their utility bill. If the contract price proves cheaper than natural gas, ratepayers and the company will split the profit.

The contract calls for the IFA to pay Indiana Gasification $6.50 per MMBtu, with the possibility of a price increase if coal gets more expensive. Currently, natural gas is at about $2.50 per MMBtu; the Energy Information Administration has projected that by 2035 it will be around $7 per MMBtu.

On Monday, the state Department of Environmental Management filed a proposed permit for the project with the EPA, but there are still several major obstacles standing in the way of the gasification plant.

To be financially viable, according to Indiana Gasification project leader Mark Lubbers, the project needs a federal Department of Energy loan guarantee for up to $1.875 billion and – most importantly – construction of a pipeline to carry carbon dioxide to the Gulf Coast for enhanced oil recovery.

The carbon dioxide pipeline, proposed by Denbury Resources but stalled for several years now, is crucial both to reducing the gasification plant’s carbon emissions and providing it an extra source of revenue from the captured carbon dioxide.

Denbury officials (who declined to comment for this story) have said they will not build the pipeline unless they have at least three regional sources of carbon dioxide. Other proposed gasification plants linked to the pipeline are also stalled because of cheap natural gas prices, public opposition and the lack of eminent domain power for the pipeline in some states.

Rosenberg said Leucadia is willing to finance the pipeline construction with Denbury even if the Rockport plant is the only one being built.

“I think our plant will go forward even if we’re the only one with a pipeline – that’s part of our commitment to the state of Indiana,” said Rosenberg. “We will have a financial relationship with Denbury that will allow the pipeline to succeed with just our project; the details are not worked out yet.”

“The pipeline is not a ‘maybe,’” added Lubbers, who previously served as Gov. Daniels’ statehouse director. “We need it to comply with our air permit, and the sale of carbon dioxide for enhanced oil recovery is important to the economics of the project. Additionally I would say that it is integral to the public policy at the heart of the project – namely the energy and environmental future of the country.”

Indiana Gasification is also seeking a state tax credit worth up to $120 million contingent upon its use of Indiana coal. Lubbers said that without the tax credit, they would likely buy cheaper coal from Illinois or Wyoming. The plant could also use up to 49 percent petroleum coke from oil refineries.

The plant is projected to create 1,000 construction jobs, 200 permanent jobs and 300 mining jobs.

Despite the challenges Indiana Gasification still faces, opponents say blocking it is an urgent fight on both symbolic and pragmatic grounds.

Polk is representing the Citizens Action Coalition, the environmental group ValleyWatch and Spencer County Citizens for Qualify of Life in challenging the Indiana Utility Regulatory Commission’s order approving the November 2011 agreement with the IFA. A state appeals court is currently hearing the matter, and with either side likely to appeal that court’s ruling, it may be headed for the Indiana Supreme Court later this year.

“I call it the Chinese model of business – it amazes me that people who call themselves conservatives can be involved in something like this that reeks of authoritarianism, reeks of crony capitalism, reeks of socialism ,” said ValleyWatch president John Blair. “There’s no angle where you can look at this project and say this sounds reasonable. It’s designed for one reason and one reason only – to enrich its sponsors.”

Utility companies have also filed a challenge to the IFA agreement with Indiana Gasification. While they aren’t committed to buying the gas directly like they were under the previous plan, the utilities say the current deal will hurt their customers.

“What may have been a good idea then doesn’t make sense now because the world has changed because of shale gas,” said Mike Roeder, vice president of government affairs and communications for the utility Vectren Corporation. “We don’t pretend to think gas prices will be $2.50 for the next 30 years but we do believe that the customer is going to be upside down in this deal for the majority of this 30-year arrangement. We have a lot of customers that struggle every month to pay their bills. This has become such a bad deal for our customers that we had to step in and try to stop it.”

Lubbers said that even if natural gas prices do remain very low for the next 30 years, ratepayers will be fine because they will be paying more than market rate for 17 percent of their gas while enjoying the market’s low natural gas prices on the remaining 83 percent.

“You’re talking about a senior citizen cutting their pills in half and yet it’s okay that 17 percent of their bill is higher to feed a Park Avenue investment firm,” he said.

IFA lead counsel Andrew Kienle countered that the deal is a worthwhile gamble for citizens.

“If gas prices stay where they are – super-cheap forever, which is a very, very unlikely scenario – the ratepayers will pay incrementally more,” he said. “What the synthetic gas will do is when gas prices are really low, consumers will pay a marginally higher amount than they would have otherwise. But if gas is really high, they will pay a lower price for the gas. It just narrows the overall range of possibilities.”

If ratepayers have lost money at the end of the 30-year contract, the state legislation says Leucadia is supposed to make it up to them – and also “guarantee” them a $100 million total savings compared to the market prices — by extending the contract at cheaper rates, selling the plant and distributing the revenue, or simply paying the difference.

Other plants run into problems

Leucadia is also proposing a coal gasification plant on the south side of Chicago, known as Chicago Clean Energy. Last summer Illinois Gov. Pat Quinn signed legislation forcing utilities to buy gas from the plant, a measure environmentalists and utility watchdogs vehemently opposed. Chicago Clean Energy representative Hoyt Hudson said the project is moving forward and in the process of acquiring permits. However he said that like the Rockport plant, it will only happen if a pipeline is built to transport carbon dioxide.

Critics of the Leucadia proposals point to Duke Energy Corp.’s under-construction, trouble-plagued integrated gasification combined cycle (IGCC) plant in Edwardsport, Indiana, which would gasify coal in order to generate electricity. Construction costs have ballooned hundreds of millions of dollars beyond projections for the Edwardsport plant, with ratepayers slated to pick up the tab. Watchdog groups say this is a warning sign for the Rockport plant.

“It’s not even about Indiana coal anymore,” said David Scott Coker, an Evansville-based conservative political commentator specializing in energy issues. “What Mitch Daniels is attempting to do with this Leucadia project to my way of thinking is the greatest abuse of political power at the state level that I have ever witnessed.”

Kari Lydersen is a Chicago-based freelancer and author whose work has appeared in The Chicago News Cooperative, The Washington Post, The New York Times and other outlets.