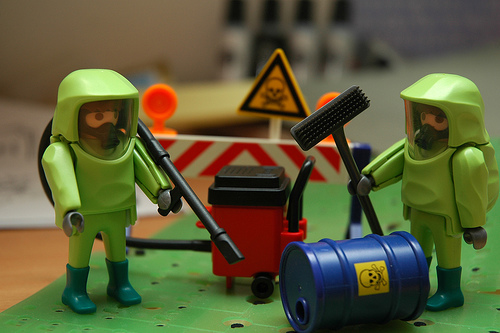 Nuclear power offers benefits, for sure, like no carbon dioxide emissions. The downsides, of course, include expensive costs for plant construction and the nasty waste that’s left behind.

But what if a bug could zap and clean up that waste? Sound too good to be true?

Use of the microbe, a bacteria called Geobacter, is still in the testing stages. It could be scaled up, however, to deal with waste that comes from a commercial-size nuclear plant, according to microbiologist Gemma Reguera, at MSU’s Department of Microbiology and Molecular Genetics. The bug’s bioremediation abilities may sound impossible, but impossible doesn’t always last forever when it comes to science.

The powers of Geobacter have been known for almost 20 years: It can immobilize radioactive uranium after the toxic element has been enriched to produce electricity. The big news is that Reguera and her team have figured out exactly how the microbe is able to zap the element – with tiny hairs, or nanowires.

“These nanowires actually shield the cell from the toxicity, creating a kind of armor so the cell survives and grows and is happy,” Reguera says in a 2011 report issued by MSU President Lou Anna K. Simon. “The bacterial hairs are fully charged with electricity, just like a live electrical wire, and zap the uranium. What happens next is simple chemistry. Soluble, dangerous uranium is immobilized onto the wires as a mineral. This prevents its spread and protects us from exposure.”

The findings could lead to “the development of microbial fuel cells and, ultimately, to the mass production of devices that could efficiently clean up extremely toxic environments.”

MSU researchers says the use of Geobacter has been successfully tested at a uranium mill site in Rifle, Colorado, to deal with contaminated groundwater.

Now these bugs aren’t capable of cleaning up a nuclear disaster like the one at Fukushima in Japan. However, the bacteria can be genetically engineered with more nanowires to zap more uranium than they naturally would.

Is that dangerous? Are there any bioproducts from the bacteria’s digestive process that need to be dealt with?

“Not really,” Reguera said in a recent interview. “The bacterium is not a pathogen, so it is quite harmless. It metabolizes organic acids such as acetate to extract electrons and carbon. The carbon is used for the bacterium to grow while the electrons are ‘dumped’ to the protein nanowires to conduct them to the uranium … The only product remaining after the process is the uranium precipitate. We are currently studying its long-term stability to investigate if it can be left in the environment safely or if it needs to be removed for further treatment and/or storage.”

The research could be a boon to nuclear power, which has been poised for a renaissance for years (at least prior to Fukushima).

“My group has been able to elucidate the mechanism that enable Geobacter bacteria to interact and precipitate the toxic uranium. This mechanism had remained elusive for almost 20 years. We identified the conductive protein filaments as the primary site for uranium immobilization.

“This is important because proteins can be mass-produced using well-established recombinant techniques and the protein’s properties can customized via genetic engineering. We have used these approaches to scale up the production of the conductive protein filaments. We are currently working on integrating them into scaled-up devices that perform like the bacteria, except that they can immobilize uranium even in radioactive and/or highly toxic wastes. These technologies have the potential to be connected to any facility processing or using uranium, to facilitate cleanup.”

OK, but how costly would scaling up the technology be?

“As you move into wastes where radioactivity is too high for bacteria to survive, you have to consider hybrid technologies, such as the deployable devices that we are developing that integrate the conductive protein nanowires of Geobacter.

“The fact that the nanowires are made of protein and that we are already mass-producing them reduces manufacturing costs significantly. The final cost would depend on the final prototype that is needed, which ultimately depends on the type of waste that needs to be cleaned up.”

As the research process moves along, this is sure to “spark” some discussion. The work was funded by National Institute of Environmental Health Science and the U.S. Department of Energy.