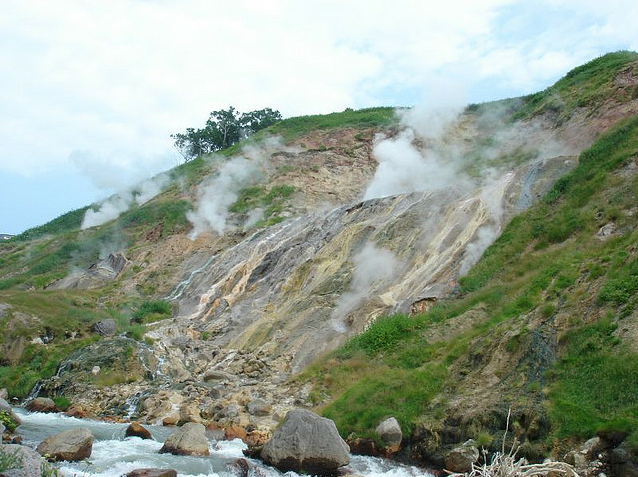 A geyser in Russia's Kamchatka Peninsula, the source of a rare heat-tolerant bacteria the Wisconsin researchers think might hold a key for advancing cellulosic biofuel production.

A rare bacteria scooped from a Russian hot spring in the 1980s might contain a key to making cellulosic biofuels less expensive to produce.

The Great Lakes Bioenergy Research Center, in Middleton, Wisconsin, last week announced a patent on a newly discovered enzyme that its scientists extracted from the bacteria.

The enzyme is capable of breaking down a variety of plant materials and turning them into fermentable sugars, and it can do so under extreme heat — up to 200 degrees Fahrenheit.

That’s important because one of the strategies researchers are pursuing to make cellulosic biofuel production more efficient is to heat the plant material first, making it easier to digest.

It’s the same reason we often cook our vegetables before eating them. The heat begins to break down the sturdy cell walls, which means less work for our stomachs.

If you can’t stand the heat…

The problem in biofuel production is that the enzymes commonly used for the conversion can’t withstand very high temperatures. That’s led scientists in recent years on a global hunt for new, heat-tolerant specimens.

The search has taken scientists from Yellowstone National Park to backyard compost bins. When new bacteria are discovered, a sample is typically preserved in a culture collection — sort of a zoo for microorganisms.

Brumm and his collaborators found their specimen in a German culture collection, DSMZ, after reading about it in an obscure Russian science journal. It’s known as Dictyoglomus turgidum. The Wisconsin team ordered a batch of the bacteria, extracted its DNA, then took it apart and started looking for the pieces that were responsible for breaking down plant cell walls.

They isolated the most interesting protein strands, including the enzyme for which they were awarded a patent, a first for the four-year-old Great Lakes Bioenergy Research Center. Not only is it hungry, it’s also not as picky an eater as other enzymes.

“It was interesting because it had a wide range of activities, and it was different than anything that had ever been published on,” Brumm said.

Corn seeds are relatively simple to break down, requiring only a couple of enzymes to finish the job. Other plant materials, like stems and leaves, are considerably more complex and might require a dozen different enzymes to convert to simple sugars, said David Mead, founder and CEO of Lucigen Corp., which will sell the enzyme.

Their enzyme performs tasks that previously required two different enzymes, each of which needs to be purchased and adds to the cost of biofuel production. “You get two enzyme activities in one. It’s like cutting your costs in half,” Mead said. The thought is that the discovery might wind up as part of an enzyme cocktail that efficiently breaks down plant material.

The Great Lakes Bioenergy Research Center is one of three research hubs the U.S. Department of Energy established in 2007 to break through barriers to cellulosic biofuel production. Other centers are based out of the Oak Ridge National Laboratory in Tennessee and Lawrence Berkeley National Laboratory in the San Francisco Bay Area. Together, the centers employ about 1,000 scientists with an annual total budget the exceeds $75 million.

The quest to find heat-tolerant enzymes is just one of several ways researchers are approaching the problem. Other strategies include developing genetically modified plants that surrender their sugars more easily, or incorporating new traits into microorganisms like yeast so that they perform different functions.

“It’s not like we’re searching for a single magic bullet here, be it an microbe, be it an enzyme, be it a plant,” said Paul Gilna, director of the Oak Ridge BioEnergy Science Center. “Any one of these developments can ultimately be combined with others.”

“We’re going to need to be firing on all cylinders in order for cellulosic fuels to really move forward in a meaningful way,” he said.