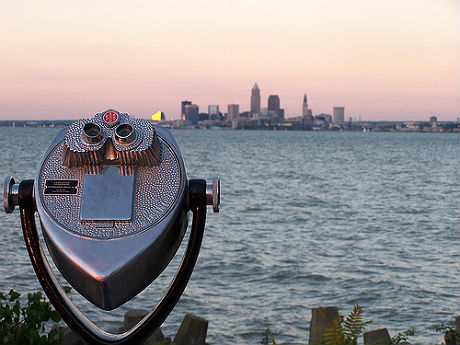 The race to be “first in the water” with offshore wind is heating up, and Cleveland is at the center of the action.

Promoters of the proposed “Icebreaker” pilot wind project in Lake Erie have their sights set on becoming the first Great Lakes offshore wind installation, and using the honor to bolster Cleveland’s nascent image as a wind power hub, despite the fact northeast Ohio’s wind resources are not stellar.

The Cleveland-based Lake Erie Energy Development Corporation (LEEDCo) partnership is competing with other Great Lakes and coastal projects for a chunk of up to $50 million of $180 million over six years the U.S. Department of Energy has offered to spur offshore wind development. The first phase of the grant competition happens this summer.

LEEDCo backed off its original plans for five 4-megawatt turbines made by General Electric when it became clear the installation and infrastructure costs would be too great, including the need for special barges to set up the turbines. But this spring LEEDCo announced the project is still on the table with a pared-down design -– five to nine 3-megawatt turbines made by Siemens Energy, which would cost less to install and are better-suited to the wind resources in the area. They would weigh about 70 tons each compared to 240 tons for the GE turbines.

“Since it’s a smaller turbine the project costs can be brought down,” LEEDCo spokesman Donny Davis told Midwest Energy News, noting that no deal with Siemens has been formalized.

Davis said he’s been assured the turbines would be manufactured in the region; Siemens is a German company with U.S. factories.

Given its industrial infrastructure and history, Ohio has been working to reposition itself as a leading domestic wind power manufacturer. On July 11-12 Cleveland will host the Making it Here conference, a gathering of companies and experts involved in the supply chain for new energy technologies. The conference features tracks on wind, solar, natural gas, advanced transportation and industrial energy efficiency, with sponsors including the Great Lakes Wind Network and the Blue Green Alliance Foundation.

Great Lakes Wind Network executive director Ed Weston told Midwest Energy News that currently two companies in the U.S., including Siemens, manufacture turbines that are marinized to survive offshore, but if and when offshore wind takes off in the U.S. he expects more companies to make marinized turbines here.

“The first offshore project in the Great Lakes will be the hardest because it will require the most infrastructure to be built,” he said. “Once the first project is done, other projects can use the existing port and its facilities to lower their costs.”

An offshore installation in Lake Erie could provide significant ripple economic benefits to the economically struggling area. “It will drive the development of the offshore infrastructure to that city or that port,” Weston noted. “Every offshore installation will require major steel fabrication work and concrete work near the port. As the market grows, the probability of U.S. factories delivering those turbines increases as well.”

Unlike wind turbines off the east and west coasts, in the Great Lakes turbines have to be able to survive winters iced-in, hence the Lake Erie project name.

“When we’d have meetings invariably someone would raise their hand and say, ‘What are you going to do about the ice?’” Davis said. “Certainly this is not the first structure ever to be built in ice – there are bridges, lighthouses.”

An artist’s rendering of how wind turbines might appear off the shore of Lake Erie at Lakewood Park, near Cleveland. (via Cuyahoga County)

The Icebreaker tag is also a reference to introducing and winning over residents to the idea of offshore wind. Davis said they have not faced much opposition or concern from residents so far, in part because the turbines will be stationed seven miles out in the lake “and hardly visible on a cloudy day.”

“Cape Wind is caught up in every possible opposition you can find; the size of the project right off the bat was quite a footprint for something not done yet,” said Davis. “With our five to nine turbines the land-scale doesn’t change overnight. You have an icebreaker and a social setting to familiarize people with the idea and allow it to evolve naturally.”

To ever be commercially competitive, offshore wind will need to approach or match the market price for electricity. The developers don’t expect the Icebreaker pilot project to ever approach price parity with coal- and gas-fired electricity, and the original GE plan reportedly would have seen a kilowatt hour price up to five times that of the market. But Davis said the plan for smaller turbines will make energy cheaper than the original plan.

A center for wind innovation

The Cleveland Indians’ 25,000 kilowatt turbine provides only a fraction of the stadium’s energy needs and, like the offshore project, is meant primarily to educate about, and promote, wind power. Rashidi has said his lightweight spiral design could actually operate suspended in mid-air — the kind of creative thinking many hope can help drive new innovations and popularity for wind power. Rashidi has also gotten grants from the U.S. Department of Energy and the state of Ohio to develop a separate design, which he describes on the department website as a “wind amplification” turbine perfect for areas with relatively low wind speeds like northeast Ohio.

Ohio was one of three Great Lakes states – along with Wisconsin and Indiana – that declined to sign an agreement between states and the federal government in March meant to streamline the tangled permitting and planning process for offshore wind, which involves up to 10 federal agencies while the state owns the lake floor.

Davis called Ohio’s abstention “a clear case of ideology versus a process that makes sense for everyone.” He noted that while Icebreaker doesn’t have the “official seal of authority of the state of Ohio,” city and county officials including Cleveland’s mayor are very supportive, and they have approval to lease the necessary submerged land.

“We’ve done so much work to date, with the Army Corps and all the other regulatory agencies to understand what we need to do,” Davis said. “If we go through this process before any larger umbrella of rules formed, we could potentially add insight into that process.”