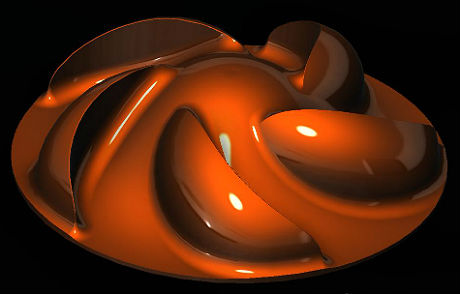 Ted Christopher’s invention could be mistaken for a shipwrecked UFO.

The unique, flying-saucer-shaped turbine is designed to sit on a riverbed. A set of ridged contours on top catch the current, causing it to spin and generate electricity.

“Ted’s invention looks like something out of a Stephen Spielberg movie,” says Chris Pederson, who co-founded Verterra Energy with Christopher two years ago.

The Minneapolis company disclosed plans this month to try to raise $2.35 million from investors so that it can build the first full-scale prototype.

Verterra Energy is among a flood of companies working to develop hydrokinetic, or run-of-the-river, turbines, which don’t require damming or diverting water flow. The Federal Energy Regulatory Commission has received hundreds of permit requests for the Mississippi River alone.

Christopher started tinkering with his turbine design in 2008 during a year-long apprenticeship at a relative’s machining shop in San Diego. He’d been seeing and reading a lot about wind turbines, but his experiences growing up near the Mississippi River caused his thoughts to flow toward water.

“If you’ve ever been knee-high in moving water, you know how powerful that is,” Christopher said.

Christopher played around with several six-inch models before eventually settling on a design for a two-foot-diameter version, the largest so far. He and Pederson founded the company in 2010. (Christopher is CEO and Pederson is chief creative officer.) After hiring multiple consultants to test and critique the design, they now believe they’re on to something.

The full-scale version will be eight feet in diameter and about two feet tall. With anchoring and other equipment the entire system will stand less than three feet. A single turbine will be able to generate between 5 and 10 kilowatts, and they envision them being installed in clusters together to increase output.

The duo hopes to be planning pilot projects in 18 to 24 months. The goal is to prove the turbine can produce electricity at rate of 10 cents per kilowatt hour, which would make it competitive with other electricity sources even without the help of subsidies.

Rivers aren’t the only potential installation sites. Christopher and Pederson envision the invention being used in irrigation channels or ocean tidal areas. And they see big potential in providing decentralized power in developing countries, where a 100 kilowatt system might transform the way of life in a small village.

They believe their patented design has advantages over other run-of-the-river turbines. One is its low profile. Most turbines stand upright in the water rather than laying flat, which allows Verterra’s turbine to go in shallower water.

There’s also no place for debris to get clogged. And it’s as safe as a playground merry-go-round, with no blades, fast-moving parts or pinch points, making its safe to install near recreation areas.

One challenge: coming up with ways to anchor the turbines for a variety of different riverbed bottoms, from silty mud to clay or rock.

“Every site is going to be different and every site presents its own challenges,” says Christopher.

Also, getting approval to install anything in a federally regulated waterway can be a long and complicated process. They hope that by the time their technology is ready, the regulatory process will have improved, says Pederson:

“We’ll hopefully continue to see more legislation that helps let companies like ours get in the water.”