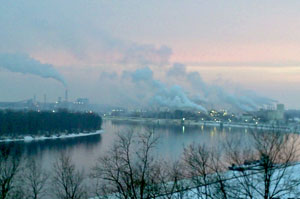 Residents of an Iowa county that has made national headlines for its struggles with air pollution will now receive electronic warnings when air quality poses a health hazard.

The warnings in Muscatine County will be issued to county residents who sign up for a free text or email service. The messaging system was approved unanimously on Monday by Muscatine County’s board of supervisors and will also include warnings for flash floods, measles outbreaks and other health hazards, plus information on school and road closures.

Kas Kelly led the county’s ad hoc committee that researched the early alert system. She’s the chair of the county board of supervisors and said the issue was brought up after an April 2 alert issued by the state air quality bureau.

“We quickly realized that we already had everything at our fingertips in order to notify the entire county,” she said. “We could accomplish this without spending one dollar of tax money.”

Residents can sign up through Nixle.com, a secure agency that provides an electronic messaging system for municipalities and government agencies.

The air quality warnings will include just those for particulate matter (2.5 microns or less) but not for excessive levels of sulfur dioxide (SO2).

John Gering, Environmental Specialist with the Iowa Department of Natural Resources (IDNR) Air Quality Bureau, explained that the state’s SO2 monitoring network is not dense enough to observe changes in pollutant concentrations over the notification area.

Both pollutants are effected by weather conditions, but the air quality standard for PM2.5 lasts 24 hours while SO2 is just a one-hour standard.

The EPA has developed tools to forecast regional pollutants like ozone and PM2.5 (often consisting of dust or soot) but SO2 is found in neighborhoods close to polluters, usually around coal plants or foundries.

After one hour, SO2 levels can dive or climb before warnings can even take effect.

A long history of air pollution

Muscatine’s monitors have registered 22 episodes of dangerous SO2 levels since Jan. 1, 2012. In that time, only one other Iowa town, Clinton, had a single report of excessive SO2 levels.

Muscatine also led the state in particulate matter air quality warnings, accounting for four of the five issued in Iowa this year to date.

The city of Muscatine currently has two SO2 monitors with a third, to be installed at an elementary school, scheduled to be operational by the end of the year. The new monitor will be the ninth SO2 tester in the state.

In addition to text messages or an email alert, Muscatine will utilize the emergency broadcast system to warn residents of dangerous levels of PM2.5 pollution. The EBS alert will be issued on area radio and television stations.

County officials asked The Weather Channel to include Muscatine air quality warnings during a local televised weather brief issued every ten minutes. The channel has been using air quality reports from the Quad Cities, more than 20 miles upriver.

Over a year ago, Muscatine activists organized to form Clean Air Muscatine (CLAM), now a non-profit with a full-time staffer. CLAM is a member of RE-AMP, which also publishes Midwest Energy News.

The group’s director, Jessica Brackett, said she’d originally requested that every instance of unhealthy air quality be announced through the system; instead the warnings will be issued when the IDNR can forecast unsafe air from PM2.5.

She also said her group would ask Muscatine schools to sign up to receive the air quality warnings.

Prolonged exposure to PM2.5 or SO2 has been linked to a number of respiratory and cardiovascular diseases and can have heightened effects on children.

A class action lawsuit was recently filed against one of the major polluters in the city, Grain Processing Corporation, a corn ethanol and food manufacturer with a history of violating air quality standards.

Over a dozen coal stacks operate in the industrial city of 22,000 on the Mississippi River.

You can sign up to receive your own air quality warning through the EPA’s Environmental News Flash system. The agency also offers iPhone and Droid apps through its AirNow program.