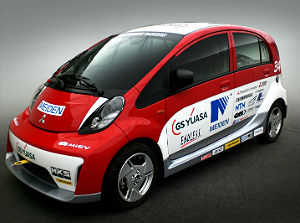 Hybrid and electric vehicles are not necessarily renowned for their performance, but this summer, competitors in one of the country’s oldest motorsports events are hoping to turn that perception on its head.

An electric Nissan Leaf competes in the 2011 Pikes Peak Hillclimb in Colorado. (Photo via Nissan)

This summer, at the 90th running of the Pikes Peak International Hillclimb, seven of the almost 200 entries will run on electricity.

In addition, Chip Yates took his 240-horsepower homebuilt electric superbike to a record time of just under 13 minutes, smashing the old electric motorcycle record by more than four minutes.

The Pikes Peak Hillclimb was first run in 1916 and quickly established itself as a testing ground for the automobile industry. It is the second oldest race in the U.S. after the Indianapolis 500. The course starts at 9,390 feet above sea level and finishes 156 turns later at the summit of Pikes Peak at 14,110 feet.

(This year’s race, originally scheduled for July 8, has been postponed because of wildfires in the area, and a new date has yet to be announced.)

The current overall record was set last year by Nobuhiro “Monster” Tajima in his twin-engine Suzuki SX4 at 9:51.278 — the first driver ever under 10 minutes on the course. It was the Japanese driver’s sixth consecutive win at Pikes Peak.

The 62-year old Tajima will be back this year, but he is forsaking a gasoline-powered racecar for one that is powered by electricity. Tajima’s Monster Sport E-RUNNER Pikes Peak Special has a lightweight carbon-fiber body and is driven by two electric motors and powered by rechargeable lithium ion batteries produced by Mitsubishi.

Electric vehicles have at least two advantages over gasoline-powered racing cars at the Hillclimb. Because the course gains 4,720 feet from start to finish, the reduction in air pressure with elevation gain results in a 30 percent loss in performance for conventional engines. The finish is so high that many drivers use supplemental oxygen to help them breathe at the dizzying heights.

Batteries and electric motors, however, are unaffected by the altitude, producing the same power at the summit as they do at the starting line. In addition, because electric cars produce maximum torque at low motor speeds, they don’t require a transmission with multiple gear changes. A conventional gasoline racer requires as many as 120 gear changes on the hill. If each change takes a quarter of a second, there is more than 30 seconds of time when the car is not being powered against the force of gravity. Electric cars never shift and thus can save that time.

Tajima isn’t the only racer who sees the potential for electric drive at Pikes Peak. Toyota Motorsports in Germany has developed its new TMG EV P002 to compete at the hillclimb, driven by multiple-time Japanese rally champion Fumio Nutahara. Two motors that produce a combine maximum power of 470 horsepower power the lightweight racer. The battery is an advanced 42 kW-h lithium ceramic design.

Mitsubishi is also entering a pair of racers. One will be an essentially stock version of the 2012 Mitsubishi i-MiEV electric four-door sedan, which will be driven by off-road racer Beccy Gordon, who is the sister of NASCAR driver Robby Gordon.

The other car, driven by two-time Paris-Dakar Rally champion Hiroshi Masuoka is called the Mitsubishi i-MiEV Prototype and features a tube-frame chassis and three electric motors, one driving the front wheels and two driving the rears. The total power output is reported to be 320 horsepower with electricity supplied by a lithium-ion battery pack.

Joining these teams will be a 400-horsepower electric 1995 BMW M3, built by the California conversion shop EV West and driven by NASCAR veteran Boris Said. Last year’s electric class winner Hanawa will be back to defend his title and dirt-track racer Elias Anderson from Austin, Texas will compete for his first time at the hillclimb in an electrically powered special called the HCE Lightning XP12.

An Audi diesel-electric hybrid was the winner of this year’s 24 Hours of LeMans race. (Photo by Laurent Cartalade / Creative Commons)

Electric vehicle technology has proven itself in other racing venues. Over the June 16-17 weekend the fabled 24 Hours of Le Mans race, the 80th running of the French classic, was won by an Audi racing car powered by a diesel electric hybrid engine.

It was the first time hybrids have competed in the race, with the Audi hybrids finished first and second, after qualifying first and fifth. A more conventional Audi diesel-powered car, similar to last year’s winner, qualified second.

Gasoline-electric hybrid entries from Toyota qualified third and fifth, but neither finished the race. One Toyota hybrid was eliminated in an accident while the other suffered mechanical woes, but while they were running they were highly competitive with the world’s fastest gasoline-powered sports-racing cars.

Other forms of motorsports are also seeing an electrical revolution. Formula One auto racing has incorporated an electrically-powered energy recovery system that stores energy used in braking and returns it via supplemental electric motors.

The record for fastest electric car is held by Ohio State University’s Buckeye Bullet at 314.958 mph. Electric drag racing motorcycles have gone over 200 mph and under 7 seconds in the quarter mile (with zero-to-60 mph times under a second).

For automakers, these events serve to showcase that electric vehicles can be more than simple commuter cars. According to Ludwig Zeller, Toyota’s General Manager of Electric and Electronics, “Electric powertrain technology in motorsports is still in its development phase but through projects like this one, [Toyota] is laying the foundations for the future of high-performance and motorsport cars.”