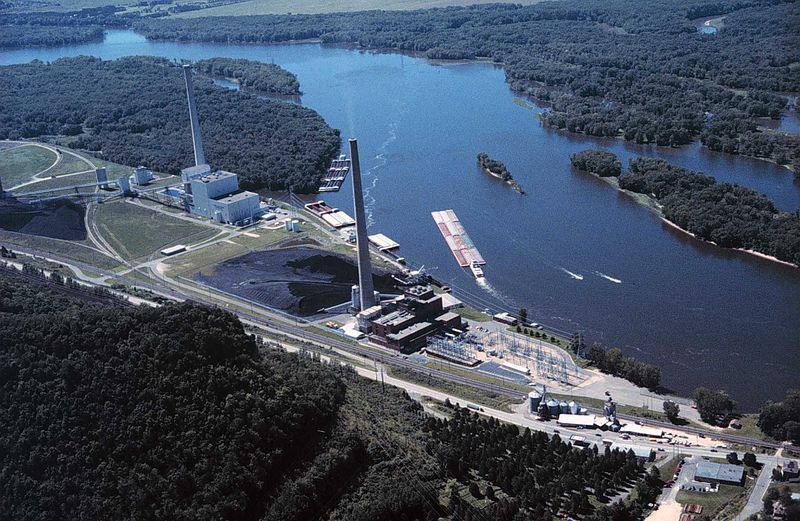 Three coal-fired units at the Alma Station will be shut down under terms of an EPA settlement. (Photo via USGS)

The Dairyland Power Cooperative will also pay a $950,000 civil penalty, EPA and the Department of Justice said.

The agency emphasized that the settlement, which affects the utility’s three largest units, will lead to significant health gains through reductions in sulfur dioxide (SO2) and nitrogen oxide (NOx) emissions.

“EPA is committed to protecting communities by reducing air pollution from the largest sources of emissions,” Cynthia Giles of EPA’s Office of Enforcement and Compliance Assurance said in a statement. “The pollution reductions and the significant investment in local environmental projects under this agreement will ensure that the people of Wisconsin and neighboring states have cleaner, healthier air.”

The three plants are located in Alma and Genoa, Wis. The settlement, which was filed in the U.S. District Court for the Western District of Wisconsin, requires the utility to install pollution controls on its three largest units and permanently shutter another three units that haven’t been used since last year.

EPA said the retirements and the new pollution controls will result in annual SO2 reductions of 23,000 tons and cut NOx emissions by 6,000 tons from 2008 levels.

Dairyland’s president and CEO, Bill Berg, said the company “stands by its strong belief that our cooperative did not violate the law.”

Further, he said, the company already planned to retire the three plants cited in the settlement.

Berg also indicated that the other terms of the settlement are, at least partially, in line with the utility’s long-term goals.

“The emission limitations on Dairyland’s other coal-fired facilities are consistent with our strategic intent to reduce environmental impacts and our dependence on coal in favor of other resources to diversify and improve the balance of our energy resources portfolio,” he said in a statement.

Of the $5 million to be spent on environmental projects, $250,000 will be allotted to both the U.S. Forest Service and the National Park Service. Another $2 million will be spent on a solar development project, as well as home weatherization projects. The utility will also look into changing its vehicle fleet to vehicles with cleaner-burning engines.

The settlement will resolve issues raised by the Sierra Club in related litigation.

EPA noted that the agreement is part of a broader strategy to reduce air emissions through litigation settlement. Today’s settlement is the 22nd reached by the agency and the Justice Department under the Clean Air Act, in what EPA calls its “national enforcement initiative.”

The settlement is now open for a 30-day public comment period.