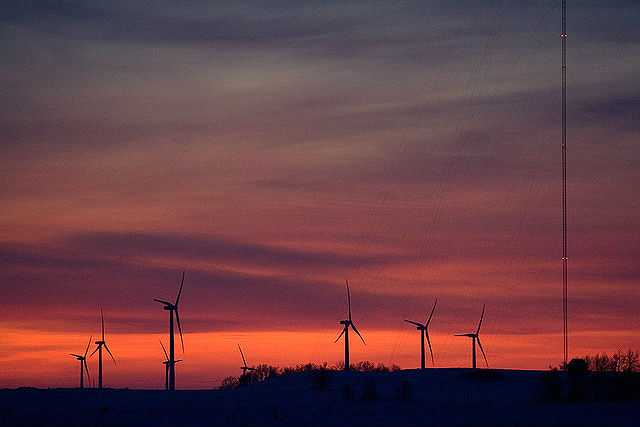 When demand is low at night, wind farms sometimes have to give away power. But it's rare. (Photo by Nic McPhee via Creative Commons)

Wind farms on the wrong side of a congested transmission line sometimes can’t give away the power they produce.

Instead, they have to pay someone to take it off their hands.

Negative prices are a rare quirk in the wholesale electricity market. They usually occur at night in areas with lots of wind, nuclear or hydropower and not enough customers or transmission to absorb it all.

After California, the Midwest’s regional electricity grid has the second most-frequent occurrences of negative wholesale prices, according to the U.S. Energy Information Administration.

Each day, MISO’s computers ask generators in the region how much electricity they can provide the following day, and at what price. Algorithms then determine the most cost-effective mix of sources to reliably match the demand forecasts.

Wind farms earn $22 per megawatt hour from the federal production tax credit, and so they’ll often offer to pay anything up to that amount to keep their turbines spinning rather than curtail generation.

“Even if they were paying us $21 a megawatt hour, they would still be making a dollar, if they get a tax credit of $22,” says Joe Gardner, MISO’s executive director of real time operations

Gardner speculated that negative prices are more common in the Midwest than other regional markets because of the large amount of wind on the system, though it’s not exclusively wind that’s affected.

It’s expensive to shut down and restart a nuclear generator or large coal unit, and so sometimes operators of those plants will choose to pay negative prices for a short period of time rather than interrupt generation.

More transmission lines could lower the frequency of negative prices, but building enough new capacity to completely do away with them wouldn’t be affordable, says Melissa Seymour, director of regional markets and regulation for Iberdrola Renewables, which operates more than 1,800 megawatts of wind farms in Iowa, Minnesota and the Dakotas.

“It’s not a bad thing,” she says. “Now do we like them all the time? No. Sometimes it can be painful, but I think it’s really working.”