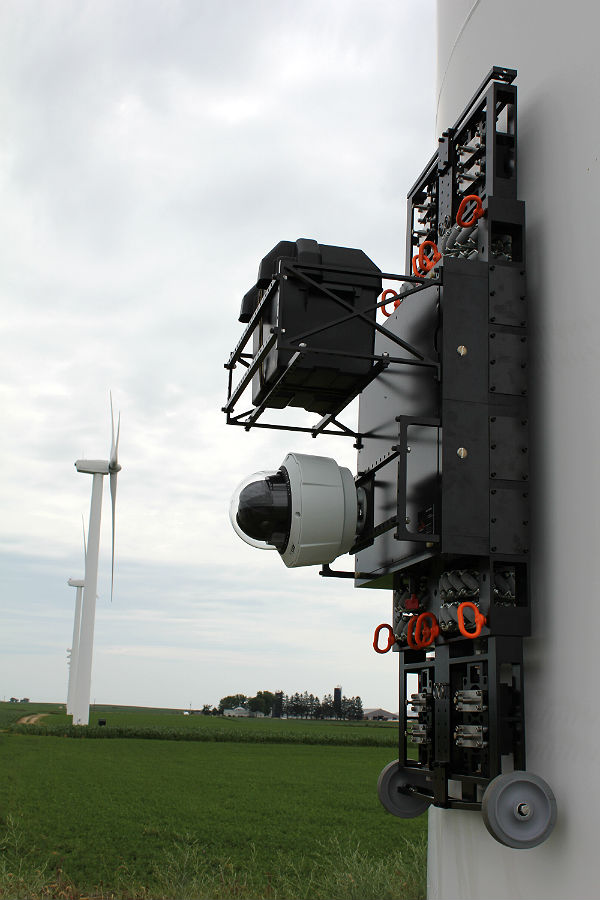 Wind Turbine Inspector is a job that requires the right skills — and stomach.

There’s been growing demand in recent years for rope specialists who can climb turbine towers and check for maintenance or repair issues as they repel from the top.

The alternatives include bringing in cranes or bucket trucks, which is expensive, or inspecting from the ground via telescope, which is tedious.

A Wisconsin start-up company thinks it’s come up with a better way: a turbine-scaling robot that lets inspectors keep their boots on the ground.

“It’s a lot easier to work on these things if you’re standing on the ground than if you’re hanging from a rope,” said Bruce Schlee, president and CEO of Helical Robotics in Oregon, Wisconsin.

The company unveiled its latest robot last month at the American Wind Energy Association annual conference in Atlanta. The briefcase-sized gadget has magnetic wheels that let it climb up turbine towers carrying high-resolution cameras or other tools.

It follows another machine it rolled out last year that looks like a chain of Erector set tractors and wraps around poles or blades, climbing and sticking through a compression system rather than magnets.

Helical Robotics was founded in 2010 after Schlee listened to a friend in the wind blade reconditioning business complain about the time it took to remove each blade for painting. What about a robot that could do the job with the blades still attached?

Schlee shared the idea with his brother, Keith Schlee, an aerospace engineer who was working for NASA at the time, and they set about inventing the machine. They now have three patents pending and five other employees.

The plan is to custom-build each machine based on the customer’s needs. The devices can vary in size and be outfitted with any number of cameras, tools, or robotic arms. They could be remote controlled or fully automated.

Schlee thinks their invention offers a safer, cheaper, more efficient way to inspect turbines, and the potential market will only grow as the world’s wind turbine fleet ages.

“There’s a lot of really basic inspection that has to happen, and there aren’t enough highly trained people who are willing to go 350 feet up in the air and repel from these towers to keep up with the inspection need worldwide,” he said.

Even if the machines don’t replace rope specialists, they could assist by holding and transporting tools and equipment for workers, he said. Other potential uses include bridge and pipeline inspections.

The company recently tested its magnetic-wheeled robot at an undisclosed wind farm in the Midwest, Schlee said. There was strong interest at the AWEA conference, he said, and they’re currently co-developing two custom machines with wind companies.

General Electric announced last month that it’s partnered with a New York robotics company on a similar turbine-climbing robot that uses a vacuum pump to suction to surfaces.

Schlee said they welcome the high-profile competition, which helps legitimize and raise awareness for what otherwise might seem like a futuristic concept.