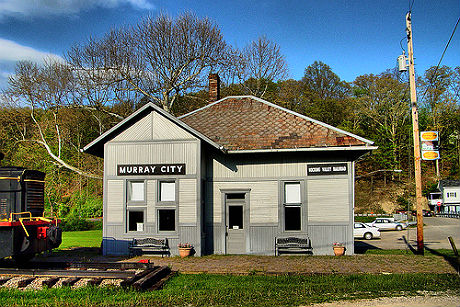 MURRAY CITY, Ohio — Retired coal miner John Campbell has lived up the same hollow in this rural town for 70 years. Tarnished clocks, glass oil lamps, mining gear from the 1800s and other antique knickknacks fill his two-bedroom home. He guesses his tin-roofed house, like many of his possessions, is at least 100 years old.

Until last spring, Campbell and his wife, Judy, relied on a wood-burning stove to keep warm in the winter. The couple had an old furnace, but it was so inefficient that they couldn’t afford the $200 gas bills. Poor insulation made the home especially difficult to heat and cool, and they sat near two window air conditioners for relief during hot summer months.

Everything changed about a year and a half ago, when the Campbells heard their town was selected for an experimental weatherization program. With financial support from the federal government and local utilities, a regional nonprofit was on a mission to retrofit every home in the 450-person community.

The couple learned that they qualified for free weatherization upgrades, including insulation, air sealing and $1,000 toward a new furnace.

“We had to have a new furnace anyhow,” Judy Campbell recalled. “So, I thought it was a good idea to take advantage of something coming through town.”

They agreed to let a local contractor come in for three days of renovations, and today their turn-of-the-century house is heated by a high-efficiency furnace and cooled by a central air conditioning system — an extra investment they decided was worth a bit of their savings.

After receiving nearly $2,900 of free weatherization services, John Campbell says his gas and electric bills are only a fraction of what they used to be. John and Judy Campbell took advantage of Murray City’s weatherization program to renovate their home and save money on energy bills. Photo by Lacey Johnson.

“On the average, we reduce energy consumption by over 30 percent,” said Tom Calhoun, assistant director of community development for the Corporation for Ohio Appalachian Development (COAD), the nonprofit that spearheaded the project in Murray City.

Over the past three years COAD has weatherized 9,000 homes throughout southeastern Ohio with the help of federal stimulus money from the 2009 American Recovery and Reinvestment Act. Of the $62 million that COAD received in government funding, it decided to reserve some for a special project it had never tried before.

“We wanted to see if we could do a town,” Calhoun said. “Murray City lucked out.”

In the early 1900s, Murray City was a major coal mining town in southeastern Ohio. It had more than 2,000 residents, the main street was lined with stores, banks and saloons, and it even had an opera house.

It has “the appearance of a very prosperous and growing village,” stated the town’s merchant directory booklet, written in 1907. “Wages in the mines are excellent, and when the mines are working steadily, Murray City presents a scene of activity and business hustle which is noteworthy.”

But like many coal mining towns in Appalachia, the local economy gradually began to falter as the mine production played out over the next few decades.

Some insulation against poverty

Today, many of the buildings — including the old opera house — are abandoned and shuttered, and nearly 30 percent of families with children are living below the poverty line, according to the latest U.S. census.

“These are folks living on annual incomes, oftentimes, of less than $10,000 a year,” Calhoun said. He estimates that the energy upgrades COAD made in Murray City saved residents an average of $400 in annual utility costs, which “means a lot” to them.

Since October 2010, COAD has performed retrofits on about 70 percent of the homes in town, and dozens of low-income families have received free refrigerators, furnaces, hot water tanks, vents, insulation and other efficiency improvements. “This program has been a godsend,” said Freda Spencer, a Murray City resident who was living in an older house with virtually no insulation. “I don’t have to wear a sweater anymore in the house, which I had to wear all the time in the wintertime.”

Despite her home being cold and uncomfortable, Spencer was still paying more than $800 a month on winter heating bills, largely due to gas leaks that weatherization workers uncovered throughout the house.

Aside from saving energy and money, Calhoun believes COAD’s program may have saved residents’ lives.

In one home, contractors discovered dangerously high levels of carbon monoxide in the children’s bedroom, which had seeped in from a cracked heat exchanger inside an old furnace. In another case, a structural anomaly in a furnace “was very close to causing a fire,” Calhoun recalled.

“We could have had a mobile home fire with a young family in it,” he said. “These old furnaces are just accidents waiting to happen.”

The need continues, but the money doesn’t

Calhoun says one reason Murray City was selected for the program is because residents buy their gas and electricity from American Electric Power Co. Inc. and Columbia Gas of Ohio — two companies that have efficiency rebate programs through COAD. This allowed the organization to perform more retrofits by combining stimulus funding with utility discounts, thereby stretching their finances further.

The Murray City project also allowed COAD to hire and train about a dozen weatherization workers from the surrounding community.

“I love helping people and fixing houses,” said Andrew Coe, 23, a member of COAD’s weatherization crew who helped retrofit half a dozen homes in Murray City. Coe lives with his wife and two children in Athens, Ohio, and worked in construction before being hired full time with the help of stimulus funding three years ago.

“We can’t forget the jobs-jobs-jobs focus of this,” Calhoun said. “A lot of these folks that work on weatherization, they’re not going to go to college.

“We took them off the street and turned them into weatherization workers.”

Unfortunately, dwindling stimulus money has forced COAD to lay off nearly all of the 400 employees it hired throughout the region since 2009. Coe’s weatherization crew is one of three still working in the Athens area, down from 13 more than a year ago.

While the pace of home energy retrofits has been slowing, demand for weatherization services is still high. Roughly 3,500 residents in southeastern Ohio are on a waiting list for services, and a quarter of a million homes are in need of weatherization, COAD estimates.

“We need a lot more money if we are ever going to get this done,” said Calhoun, who would like to see the Murray City project replicated in 100 small communities each year.

“We created a buzz in that town. Things were getting done,” he added with a touch of pride. “We’re not going to change people’s socioeconomic status by providing weatherization. But we’re going to provide hope.”