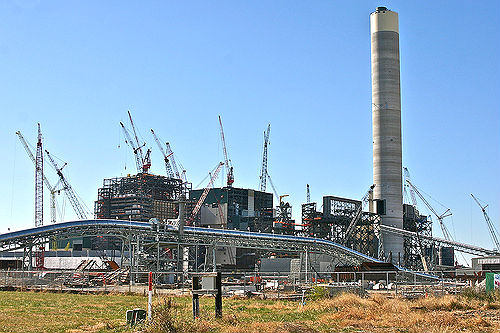 The Prairie State Energy Campus under construction in November, 2010. (Photo by Eco-Justice Collaborative, used with permission)

When 60 towns and cities in Ohio committed to buy power from a new 1600 MW coal plant about five years ago, demand for electricity was high, growing municipalities were worried about securing affordable power for the future and coal was still seen as the bedrock of the nation’s energy mix.

A lot has changed since then.

Now construction costs for power plants have skyrocketed, cheap and abundant natural gas has made coal-fired power uncompetitive, and the recession has meant energy demand is not what had been projected.

So municipalities that committed to take-or-pay contracts to buy power from and finance construction of the massive Prairie State Energy Campus and adjacent coal mine in southern Illinois are realizing that instead of securing a stable and relatively clean energy supply, they are saddled with paying above-market amounts for power they don’t need from a project plagued by cost overruns and other troubles.

At least that’s the way Prairie State critics see it — and there are many, including consumer and environmental groups in Ohio, Indiana and other states. Non-profit public utilities covering eight states — Ohio, Kentucky, Missouri, Illinois, Indiana, Michigan, West Virginia and Virginia — signed contracts to buy power from Prairie State.

“The project was presented as a way for communities to own a generation unit and have more control, predictability, and stability for meeting the power and capacity needs of ratepayers,” said Lisa Anne Hamilton, a financial regulatory consultant advising Ohio Citizen Action. “By owning the unit they could hedge against volatility in wholesale market power and variability in coal supplies and with the mine right next door, eliminate the (coal) transportation costs that in many projects represent 60 percent of the cost. So there were all these very attractive incentives presented to the public power entities  as a way to lock in low-cost stable power by participating in this project.”

Since March, some budget-strapped communities in Ohio and other states are paying hundreds of thousands of dollars a month — even though the plant is not yet providing them power.

“Problem is the bills came but the electricity did not,” said Tom Sanzillo, former first deputy comptroller of New York and director of finance for the Institute for Energy Economics and Financial Analysis. “Now they are paying for electricity not received and having to buy the real, useable electricity on the market, to boot.”

Ohio is committed to buying the largest chunk of Prairie State’s power, since American Municipal Power Inc. contracted to buy 23 percent of Prairie State’s electricity on behalf of 68 members, 60 of them in Ohio. The Illinois Municipal Electric Agency owns the next largest stake at 15 percent.

A spreadsheet compiled by Ohio Citizen Action estimates that Ohio communities are paying almost $3 million a month since March. Bowling Green and Hamilton are paying $353,850 a month, the group estimates, and towns including Galion, Tipp City, Painesville and Piqua are paying more than $100,000 a month.

Hannibal, Missouri, the economically depressed Mississippi River hometown of Mark Twain, has paid almost $1.5 million for Prairie State since spring without getting any power.

The coal company Peabody owns just 5 percent of the project, “yet it has been a prime beneficiary of the plant’s development to date,” in Sanzillo’s words. “It has been paid for a mine it sold to Prairie State, an ashfill, for construction management of the mine and for services related to the management of the mine. No one knows what future benefit accrues to Peabody from the technical and professional information learned during the plant development and plant operation.”

Back when natural gas prices were high and volatile and the economy was humming, it appeared the price of Prairie State’s power would be at or below market prices, which could have meant future savings for the participating municipalities compared to what they would have spent buying power on the wholesale market.

The idea was that if communities didn’t need all the power they were committed to buy under the take-or-pay contract, they could sell it on the open market and generate extra revenue. Now that Prairie State’s power prices are projected to be well above market rates for at least several years, however, communities will probably struggle to recoup some of their losses by selling power below the price they paid for it.

Prairie State power is projected to cost communities $58 per megawatt hour for the plant’s first year of operation. On July 6, power on the PJM Interconnection was selling for $41 per megawatt hour.

Prairie State officials (who did not respond to an interview request for this story) have said the communities still stand to gain in the future once the economy picks up and power prices rise. But critics say that doesn’t help communities who are under severe economic stress right now.

“The problem is these are small municipal systems, they’re not set up to manage a costly hedge operation with revenue coming in and revenue coming out and deficits and losses projected forward,” said Sanzillo, who, like Hamilton, was hired by Ohio Citizen Action to provide expert analysis.

“They’re just small places – their job is to set up a rate, hope they can make the budget, get the revenue and pay the bills…I can’t tell the people I owe my car payments or my mortgage to that I’ll pay in the future. Real people pay real bills right now – that’s the problem for these communities.”

Under their contracts, the utilities are largely responsible for cost overruns of at least $1 billion, with Prairie State’s estimated capital costs ballooning from $2.9 billion in 2008 to $4 billion in 2010 to nearly $5 billion today.

The significant malfunction of an exhaust fan at unit 2 in March means the plant won’t be fully up and running until 2013, according to a disclosure notice from AMP. Originally the two units were scheduled to be done in December 2011 and August 2012. The contractor building the plant, Bechtel Power, is responsible for some but not all the cost of delays.

“A lot of people did not get the risk that was involved in this, the risks were so downplayed,” said Ohio Citizen Action executive director Sandy Buchanan. “Many of the communities didn’t understand they were becoming de facto owners of both a power plant and a coal mine. Now it’s dawning on people what the impact will be on rates – they see money going out the door for absolutely nothing. They paid four months of payments to AMP for zero electricity.”

On June 6, Prairie State announced that unit 1 had gone online and unit 2 was scheduled for completion in late 2012. The website called it “a significant milestone in the process of completing the largest coal-fueled power plant to be built in the United States since 1982.” A release from AMP said the plant was scheduled to start selling power through the PJM Interconnection on July 1, though no releases since have confirmed if this is happening.

The pollution controls allow Prairie State to burn Illinois’s high-sulfur coal, theoretically providing a boost to the local economy through coal mining and related jobs. Currently there are about 500 employees at Prairie State.

“Prairie State Energy Campus represents an important step in helping to create a sustainable and secure energy future for this country,” says the website. It adds that even given changing market conditions, the plant still makes sense:

“The decision by the Owners in 2007 to begin construction of the PSEC was based on sound long-term forecasts showing electricity costs from PSEC would be very competitive with other fuels such as nuclear and natural gas over the anticipated 30+ year life of the facility, which remains the case today, even with some operating delays. Additionally, coal-fueled electricity prices remain stable and reliable compared with the historic volatility of natural gas prices.”

Buchanan and Sanzillo are among critics who don’t believe Prairie State or AMP are being forthright about the true status of the project or its startup date. There have also been serious concerns raised about the safety, capacity and value of the adjacent coal mine and coal ash storage pits on the campus 50 miles southeast of St. Louis.

This spring, citizen action groups launched a website, www.prairiestatecoalplant.org, documenting the project’s problems and costs to ratepayers. Buchanan said their aim is to educate residents and elected officials so they can bring their concerns to AMP and to Prairie State.

Hamilton said it is unclear exactly what legal options municipalities have to annul or revise their take-or-pay contracts. Though the situation varies by municipality, “these are not easy contracts to get out of,” she said, noting the risk of a “domino effect of defaulting participants.”

“If you do have a community that defaults, the remaining power participants pick up the defaulting party’s share,” she said.

Sanzillo said the project should have been canceled after energy and market trends began changing in 2008, leading to the cancellation or suspension of a total of 166 planned coal plants, according to environmental and watchdog groups, including a Peabody project similar to Prairie State – its planned 1500 MW Thoroughbred Energy Campus in Kentucky. Sanzillo said that if something isn’t done to alleviate the situation, Prairie State could have wide-ranging debilitating effects on towns’ finances and energy outlooks for years to come.

“This will put pressure on consumer and business rates for everyone in their systems at a minimum,” he said. “It will put upward pressure at a time power prices are the lowest they’ve been in maybe a decade. So when other places can be reducing rates, having something that puts upward pressure is kind of a double insult.

“Other municipal electrical systems might use the improved conditions to lower rates and give people a break in the bad economy or improve their system with new investments or a new wind project. Here that’s not going to take place.”