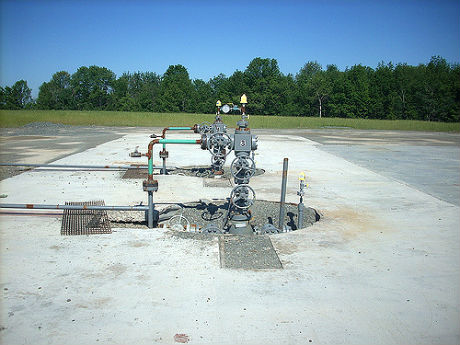 A recent decision from an Ohio review board has drawn attention to how the shale-packed state handles wastewater from hydraulic fracturing.

In Ohio, most fracking flowback from local and out-of-state production is sent to injection wells that store the fluid underground. But another option exercised by at least one company, Patriot Water Treatment LLC, involves diluting the brine and passing it along to a city for disposal in the Mahoning River.

The Ohio EPA eventually stepped in to prohibit the practice — which was taking place about 20 miles from the Pennsylvania border in Warren, Ohio — but was told last week that it doesn’t have authority to do so.

The state Environmental Review Appeals Commission (ERAC) ruled in the company’s favor, sort of. ERAC decided that Ohio EPA cannot ban the brine-dumping. But another agency, the Ohio Department of Natural Resources (ODNR), can require a special permit.

“Patriot has always been able to and can continue to pre-treat industrial and brine wastewater,” said Ohio EPA in a statement. “They just cannot send the brine to the City of Warren’s wastewater treatment plant for disposal.”

Under current regulations, ODNR requires that almost all oil and gas wastewater go to injection wells. (A less-used approved option is application to icy or dusty roads.) But a final allowance is made for “other methods approved by the chief for testing or implementing a new technology or method of disposal.”

Does Patriot Water’s treat-and-dump method qualify under the new technology clause? ODNR hasn’t said, but it is possible. Patriot would have to apply for a special permit from the agency and would have to show that its treatment brings the water quality in compliance with the federal Safe Drinking Water Act.

“After it’s treated, it must be drinkable water,” said ODNR spokesman Carlo LoParo.

Trent Dougherty, attorney for the green group Ohio Environmental Council, told EnergyWire that the onus is now on ODNR to issue a policy directive that spells out whether Patriot’s method would be covered under the technology allowance.

“The ball is squarely in the DNR’s court right now,” Dougherty said on Friday. “[ERAC] essentially gave DNR the opportunity to finally make a decision on ‘yes’ or ‘no’ if this is an approved disposal method for brine or flowback.”

“We’re all sitting in giddy anticipation of what DNR will do,” Dougherty added, “and we’re hoping DNR will do something. They could do nothing.”

The latter seems most likely. As LoParo explains it, inaction is not because ODNR is uninterested in regulating disposal methods but rather because the rules in place are sufficient.

“What it boils down to now is that this particular company would have to apply for a permit to dispose of brine with a ‘new technology,'” LoParo said — a permit that would be granted only if the end-product fluid were, essentially, drinkable.

If not? “The Ohio attorney general would enforce that as a violation,” he said.

The Ohio Environmental Council acknowledges that the classification of post-treatment brine is a murky issue.

“Whether it’s any worse than any other industrial wastewater going through the system — how do you put those two on a scale and determine which one’s better?” asked Dougherty. “If I have a glass of lemonade, it’s a glass of lemonade … until I mix it with iced tea, and it’s an Arnold Palmer.”

But Melanie Houston, council director of water policy and environmental health, said that for now, the definition of brine is broad enough that the end-product fluid at a treatment facility would still be characterized as brine and therefore should still be regulated closely by ODNR.

Fracking water is laced with a small percentage of chemicals, some harmless and others toxic. The issue of river disposal in Ohio is timely, as the standard injection wells for wastewater have recently come under scrutiny for their ability to trigger earthquakes and for concerns from environmentalists that the wells could taint groundwater (EnergyWire, June 18).