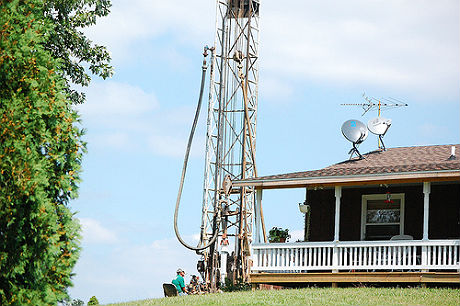 Geothermal bore drilling at a rural home. (Photo by jeffreyw via Creative Commons)

Iowa is a national leader in wind energy, with the second most installed capacity after Texas.

A bill signed into law this spring aims to help diversify the state’s renewable sources beyond wind, offering among other things a first-ever state tax credit for geothermal projects.

Geothermal installers say the incentive is already helping to sway motivated customers who have done their homework but hesitated to make the investment until now.

Geothermal systems tap into the near-constant temperatures found deep enough below the surface all year round, usually between 50 and 60 degree Fahrenheit. In the winter, water or fluid is pumped through a system of underground pipes, carrying heat up to the surface. In the summer, the system reverses, depositing heat below ground.

Iowa’s new incentive piggybacks on an existing 30 percent federal tax credit for geothermal projects. Homeowners can claim another 6 percent of the system cost, or one-fifth of the federal amount. The credit has no cap and applies to any system installed beginning Jan. 1, 2012.

The law also includes a property tax exemption, so that if a geothermal system increases a home’s assessed value, the owners won’t pay taxes on that added amount for 10 years.

Iowa Department of Revenue spokeswoman Victoria Daniels said the office has received some questions about geothermal credit, but that it won’t have data on its use until after next tax season.

Marr said his “seat of the pants guess,” based on what he’s heard from members, is that installations are up 10 to 20 percent this year due to the tax credit and a mild winter.

Installers’ pitches have been about the numbers, not the technology, said Reed Carlson, who co-founded Geothermal EcoOptions last August in Decorah, Iowa.

“Most [customers] already know that they want geothermal,” Carlson said. “Now they see it and say ‘I can afford to do it.'”

“They were kind of on the fence, and I think [the tax credit] helped,” Gilbert said. “A lot of people that want geothermal have done their research and they know they want it. This just makes it a little bit easier.”

The systems still aren’t cheap. Most cost at least $18,000 and up to $50,000 depending on size and features. Gilbert says the state credit gets the upfront cost potentially within a few thousands dollars of an ultra-efficient furnace and air conditioner combination.

About half of Gilbert’s work is in geothermal, and more than half of those projects last year were retrofits rather than new home construction. New directional drilling technology has made it much easier to install geothermal in existing homes, he said.

Geothermal is a good fit for Iowa in part because its soils are relatively easy to drill in. Installers don’t have to worry about hitting rock as much as in other states, Gilbert said.

And from a policy perspective, the heating-and-cooling systems are a good renewable complement to the state’s wind-generated electricity.

“We had a strong interest in diversifying our renewable energy sources,” said State Sen. Robert Hogg, who helped move the bill through the legislature.

Hogg said he and others in the Senate supported expanded wind incentives, but geothermal and solar proved to be the most politically feasible areas to support renewables.

In March, Republican Gov. Terry Branstad spoke at the Iowa Geothermal Association’s annual convention, where he voiced support for the geothermal legislation.

Branstad told convention attendees that geothermal systems are installed in both his private home and the recently remodeled governor’s residence at Terrace Hill.