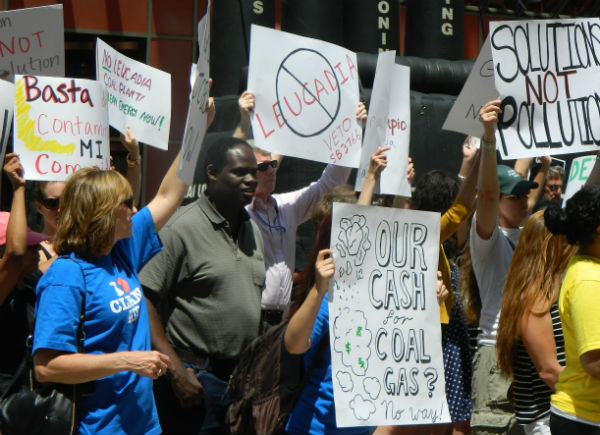 CHICAGO — Opponents and backers of a controversial proposed coal gasification plant in Chicago squared off with competing rallies this week, as Gov. Pat Quinn decides whether to sign a bill that would allow Leucadia National Corporation to pass along 100 percent of the $3 billion plant construction costs to suburban Chicago and downstate ratepayers.

Without the bill (SB3766), the company can still recoup 84 percent of construction costs from ratepayers with the utilities Nicor Gas and Ameren Corporation, as outlined in an order from the Illinois Commerce Commission.

Chicagoans are not on the hook for the plant because Peoples Gas and North Shore Gas, two utilities that serve the city, elected to undergo rate-making proceedings every two years rather than participate in the project, also known as Chicago Clean Energy. The choice was laid out for Illinois utilities under legislation Quinn signed in July 2011.

Neither side mentioned the actual content of SB 3766 during their rallies this week; rather they used the forum to make their larger cases regarding the plant. Supporters say the plant will create hundreds of jobs, provide “clean energy” and revitalize the economically struggling Southeast Side. Opponents countered that the plant is a bad deal for ratepayers that will add pollution to an already heavily contaminated area and continue dependence on coal, increasing the environmental effects of coal mining downstate.

The public relations firm that organized Monday’s pro-plant rally, Resolute Consulting, billed it as a chance to debunk “misinformation” they say is being spread by opponents.

“The sky is falling, the house is on fire!” is how Illinois State Senator Donne E. Trotter described “the rhetoric spewed” by opponents, as sirens from Chicago fire trucks blared. “The sky is not falling, the integrity of some individuals who are opposed to this is certainly falling.”

Trotter also invoked “the god of thunder, the god of energy” in calling for the plant. Reverend Walter Turner dubbed it “a day of reckoning.”

“It’s not just for our children, it’s for the future of our children’s children,” he said of the plant. “So when they wake up every morning they can have hope.”

Chicago Clean Energy representative Hoyt Hudson said that without being able to recover 100 percent of construction costs, the company will not be able to get financing to construct the plant.

“This project is predicated on a full cost recovery,” he said. The Illinois Commerce Commission order “throws a wrench into the whole deal,” he continued. “You can’t construct a facility if you’re only going to pay 84 percent of your salaries and 84 percent of your costs.”

After Tuesday’s rally by opponents, Citizens Utility Board executive director Dave Kolata said that if the plant is such a good idea, Leucadia should be able to attract private investment to cover the remaining 16 percent of the construction costs, which, given the $3 billion price tag, would be roughly half a billion dollars.

“If they can’t get financing on Wall Street, that indicates Wall Street has doubts about the economics of this project,” he said, noting that the consumer protection group is neutral on the project as a whole but opposes the pending bill.

The opponents’ rally featured an inflatable coal plant with four smokestacks emblazoned with the words “asthma attacks, acid rain, mercury poisoning, global warming.” Resolute Consulting senior account executive Eileen Boyce said that it was “repurposed from (protests against) Fisk and Crawford” –- the archaic Chicago coal plants scheduled to close in September, and pointed to it as an example of “misinformation,” since the gasification plant will not have smokestacks, will have relatively low emissions and is required to sequester 85 percent of its carbon dioxide emissions or face action by the state attorney general.

Construction of the Chicago plant and one proposed by Leucadia in Indiana are contingent on the building of a pipeline to carry carbon dioxide from the Midwest to the Gulf Coast, where it can be used for enhanced oil recovery.

Residents at the opponents’ rally said any extra pollution is too much in their area, and they fear dust from the transport and storage of coal and petroleum coke, and the diesel emissions of trucks and machinery at the plant. (Up to half the plant’s feedstock can be petroleum coke, a byproduct of oil refining.)

“We don’t need Leucadia, there are thousands of other jobs that could come to the Southeast Side,” said Cheryl Johnson, a well-known grassroots activist in the Altgeld Gardens public housing project on the far South Side. The opponents delivered petitions with 11,250 signatures to a representative from Quinn’s office, who praised the green wrapping paper on the box. Boyce said plant supporters delivered about 100 letters and six video testimonials to the governor.

Illinois Sierra Club president Jack Darin said he hopes Quinn vetoes the bill to make a statement about coal in general – “about ending this state’s sweetheart relationship with the coal industry.”

“They’re not willing to put up a dime of their own money,” he said of Leucadia. “This is just about ratcheting up a subsidy.”

Press materials for the pro-plant rally didn’t mention the construction cost recovery which is the heart of the bill but included highlighted excerpts outlining consumer protections already passed into law last summer.

These include a guarantee that ratepayers will save $100 million over the life of the plant compared to market gas rates, with the plant developers estimating rate savings of $1.2 billion. The legislation includes a 2 percent cap on rate increases and an initial $150 million cash reserve on hand.

If it turns out market rates are lower on balance and ratepayers lose money over the 30 years – as opponents expect – Hudson said Chicago Clean Energy will  reimburse ratepayers through measures including extending the life of the plant or selling off the assets. Critics question whether this is a viable strategy, and predict ratepayers will be left with a loss despite the guarantee in the legislation.

The project is slated to create about 1,000 construction jobs, 200 permanent jobs and 700 indirect jobs in the Chicago area, plus about 150 coal mining-related jobs in downstate Illinois.

Chicago Regional Council of Carpenters business representative Dan McMahon lives in the neighborhood and has worked as a contractor at nearby steel mills and the defunct coke plant that now occupies the site. He said the gasification plant would be an environmental victory for the area, since the company has committed to spend about $30 million remediating the 140-acre brownfield.

“(Opponents) have taken in a lot of people in my neighborhood, saying it will be no different than the steel mills,” McMahon said. “That’s not true. There is no environmental debate. But a small number of people have scared people into thinking it will be a dirty site.”

McMahon referred to the Southeast Side, where steel mills and other industry closed since the 1980s, as “a jobs desert, an opportunity desert.”

The past few years have seen a resurgence of economic interest in the area, so residents are debating how to reinvigorate the economy without adding to the history of toxic pollution.

Opponents of the gasification plant see it as more of the same and instead argue for educational or health care institutions, development of the area’s parks and open lands, or renewable energy-related jobs like manufacturing wind turbine components and solar panels.

“This is not a clean technology, coal is a dirty product,” said resident Robert Garcia, 35. “We need to enhance our natural space and bring in businesses that don’t pollute.”

The Citizens Utility Board and Sierra Club are members of RE-AMP, which also publishes Midwest Energy News.