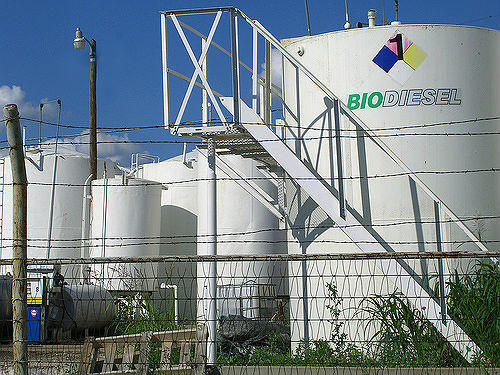 Small and midsize biodiesel producers are struggling to sell renewable fuel credits in the wake of recent fraud allegations, which have made buyers skeptical of working with lesser-known firms.

A federal jury found a Maryland man guilty last month of selling $9 million worth of fraudulent renewable fuel credits to brokers and oil companies, which have since had to pay fines and purchase new credits.

The credits, known as Renewable Identification Numbers, or RINs, are used to track oil companies’ compliance with the federal Renewable Fuel Standard, which calls for using 36 billion gallons of biofuels by 2022.

The U.S. Environmental Protection Agency (EPA) reiterated in a Congressional hearing this week that it’s up to refiners and others to perform their own due diligence on credits they buy.

The response from industry, however, has simply been to avoid buying from all but the biggest and most well-known biodiesel producers, shutting many smaller players out of the market.

‘They just don’t want to deal with the little guys’

Since the fraud issue emerged last winter, Dave Walsh has had to go above and beyond to sell the credits from biodiesel his company produces in Mauston, Wisconsin, northwest of Madison.

Walsh BioFuels, which makes just over 1 million gallons a year from corn oil, hired a third-party auditor in April to review its operations and certify that its credits are legitimate. Even so, some refiners won’t buy them, and others demand a discount.

“I made the fuel. I sold the fuel. My RINs are just as good as ADM’s or Cargill’s, but [oil companies] won’t buy them,” Walsh said. “They just don’t want to deal with the little guys.”

Walsh estimates auditing services will cost the company between $20,000 and $30,000 per year. Meanwhile, he gets about 15 cents less per gallon from his credits than larger producers, he said.

“If something were to go wrong, whoever gets stuck with that RIN knows that if they go over and knock on Cargill’s door, they’re going to resolve the issue quickly,” Hove said.

In short, they want to know there’s money to be had if someone needs to be sued.

The RIN Alliance hired a Des Moines engineering firm, EcoEngineers, to audit many of the smaller biodiesel producers in its network. Any producer that declines to give access is blacklisted from its system.

The first step is making sure a company has a facility fit for producing biofuel — something that didn’t exist in the Maryland fraud case. Next, they analyze the plant’s mass and energy balance.

“We track and monitor that continuously to understand what’s going in and what’s coming out, and through those efforts we can speak with confidence whether a client deserves a renewable fuel credit or not,” Menon said.

Other companies are developing similar quality assurance systems that might have prevented the recent fraud from throwing the RIN market into turmoil.

Every gallon of biofuel produced in the country gets a unique, 38-digit serial number called a RIN, which companies can buy, sell or file to comply with the Renewable Fuel Standard.

The credits were created to help oil refiners in parts of the country where biofuel production isn’t as common. Instead of shipping fuel to the East Coast, for example, companies there can buy excess credits from the Midwest.

The fraud has affected biodiesel more than ethanol because that’s where the money is. An ethanol RIN trades for about 2 cents, while biodiesel RINs can sell for more than $1.50.

“If you want to go out and be a crook, you want to get the most bang for your buck before you go to prison, I guess,” Hove said.

‘Show me the gallons’

Maryland-based Clean Green Fuels was accused of making up 21 million gallons worth of RINs and selling them to brokers and oil companies. Its founder, Rodney Hailey, was convicted last month of wire fraud, money laundering and 42 counts of violations of the Clean Air Act.

The EPA issued fines against 24 oil companies that had the fraudulent credits on their books, and the agency gave them 14 days to replace them with valid ones.

At a U.S. House hearing on Wednesday, Charles Drevna, president of American Fuel & Petrochemical Manufacturers, criticized the EPA for allowing producers to “game the system.”

“Absent a tip, EPA does not enforce its requirements and instead sits back and relies upon a ‘buyer beware’ enforcement scheme that actually penalizes the victims of fraud,” Drevna testified.

EPA officials said more RIN fraud investigations are in progress, including two cases in Texas, but they also reiterated that oil companies are ultimately responsible for knowing what they’re buying.

“It’s just created an enormous amount of animosity and uncertainty [in the market,]” Hove said.

Third-party audits inject some transparency, but Hove said what’s really needed is for the EPA to give immunity to refiners that follow certain quality-assurance steps but still get duped by fraudulent RINs.

If it were up to Walsh, he would do away with the credit system altogether and force everyone to meet the mandate by buying actual fuel instead of trading paper slips.

“Don’t tell me you can’t get [biofuel]. I know guys shipping it up to Canada on rail cars,” Walsh said. “Get rid of the RINs and show me the gallons.”