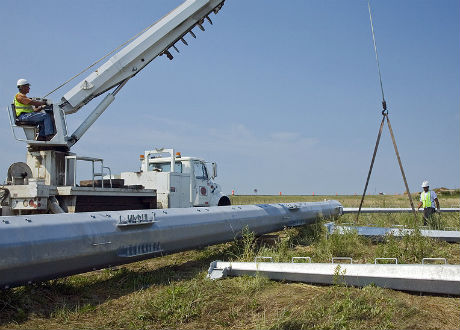 After years of planning, debate, and regulatory procedures, one of the largest transmission projects in the country is on track to be completed by 2015.

CapX2020 reached a major milestone in receiving an approval from Wisconsin officials in May, while igniting an ownership battle over a related line in the Badger State.

The Wisconsin Public Service Commission in May gave approval to the final CapX2020 leg, which crosses the Mississippi River at Alma, Wisconsin, before heading south toward LaCrosse.  Prior to that, the Minnesota Public Utilities Commission approved the state’s final portion, from Hampton to Alma, in April.

Although landowners and individuals opposed to CapX have raised objections, the Wisconsin PSC denied all 14 petitions by a 3-0 vote last week. Minnesota’s PUC will soon hear two petitions against the project.

The $2.2 billion spider web of 800 miles of high transmission power lines criss-cross four states before terminating in Wisconsin, where another utility plans to potentially continue it to Madison.

Tim Noeldner, vice president of special projects for the Sun Prairie, Wisconsin-based WPPI Energy, said initially the utility had planned to add two 161 kilovolt lines from Alma but decided instead to continue with same voltage, 345 kV, as the rest of the line.

The higher voltage increases the amount of power that can be transported, primarily from wind farms, to Wisconsin’s grid by 1,200 megawatts, the equivalent of a nuclear power plant. Much of Wisconsin’s wind power, at least in the southwest, already comes from wind farms in Minnesota, Iowa and the Dakotas.

“The renewable energy is cheaper to the west of Wisconsin because there’s a higher constant average wind speed than you can get in Wisconsin,” he said. “The wind capacity in Wisconsin is 30 percent while in North Dakota and southern Minnesota it’s closer to 45 percent.”

The ability to buy more renewables will not only affect WPPI but other utilities looking to meet the state’s renewable portfolio standard or who may need to prepare for carbon pricing at some point in the future, said Noeldner.

The Federal Energy Regulatory Commission (FERC) rules require a utility that is asking to access the power from another utility’s substation offer a joint ownership arrangement of any proposed lines. ATC argues it can own the line while using the Xcel Energy Briggs Road Substation near Homan as a link to the electrical grid.

Xcel argues that federal and  regulations give it co-ownership. “We have that ownership right and we don’t want to give it up,” Carlsgaard said.

The Midwest Independent System Operator (MISO) designated the Badger Coulee as a “multi-value project” and approved it with ownership being shared by Xcel and ATC, he added.

FERC will decide the ownership outcome. “We fully expect the FERC will rule in our favor,” said Anne Spaltholz, ATC’s corporate communications manager. The utility has studied the 150 to 170 mile long line, expected to cost $425 million, for several years, she said, with little input from Xcel.

In another recent CapX development the $490 million Hampton-Rochester-LaCrosse section received state approval in Minnesota after the PUC rejected the recommendations made by an administrative law judge to change the route.

The more than 150 mile stretch includes a connection to two 161kV lines to Rochester that branch off the 345 kV line. The 2 substations that those lines will connect to are owned by Rochester Public Utilities.

For Rochester the line adds reliability to a rapidly growing region. The prospect of a biotech campus emerging in Pine Island may increase, too, the need for more electricity, Carlsgaard said.

The other projects are in various stages of completion. Here’s a rundown.

Brookings County, South Dakota, to Hampton, Minnesota: The longest stretch of CapX2020, at 250 miles, is under construction. The building of foundations for towers carrying 345 kV lines began in May in Renville County. The crews will head east first, and then work west. The line will be completed in 2015.

Fargo, North Dakota-St. Cloud, Minnesota: A 30-mile portion of this 210 mile, 345 kV between Monticello, Minnesota and St. Cloud went live in December 2011.  Foundations are being built now between St. Cloud and Alexandria and the towers will go in this fall.  Foundation works starts from Alexandra to the border this fall. The North Dakota Public Service Commission votes this summer to approve the line.

Hampton, Minnesota-Rochester-LaCrosse: The 180 mile project (a total including the two Rochester lines) will have 345kV lines crossing Minnesota before heading across the Mississippi. The final line needs one more approval, from the Rural Utilities Service Commission. Work will begin January 2013.

“There may be a bigger transmission build out in the country but I don’t know of it,” said Carlsgaard. “For us CapX is about local reliability and being able to add more renewables. Those are the biggest positives that will come out of these projects.”

In an earlier version of this story the name of Sun Prairie, Wis.-based WPPI Energy’s director of special projects, Tim Noeldner, was misspelled. In addition, the Minnesota Public Utilities Commission earlier this year approved the Hampton-Rochester-LaCrosse portion of CapX2020, not the Brookings-Hampton section.