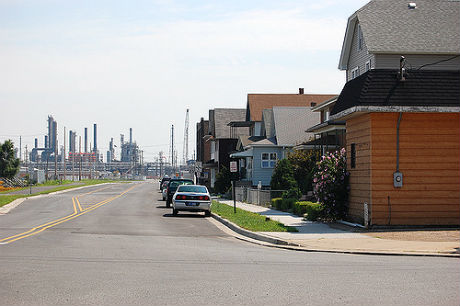 For the past few years neighbors of the BP Whiting oil refinery in northwest Indiana, just across the border from Chicago, have watched the already-sprawling facility expand its footprint with new equipment to process tar sands oil from Alberta.

Tar sands and the chemicals used to dilute it so it can be transported through pipes mean more impurities and pollutants to be removed in the refining process, so local residents and environmental and health groups feared serious increases in pollution with the tar sands expansion.

But a new “open path” monitoring system likely to be announced in coming days – the result of an environmental justice lawsuit filed by neighbors – along with an EPA consent decree announced May 23 means BP Whiting can be a model for other refineries and also offers residents a chance to actively watch for signs of excessive pollution.

The sweeping agreement that resulted from a lawsuit by major environmental groups and enforcement action by the EPA includes $400 million worth of new pollution controls and a $2 million fenceline monitoring system with results available online.

In addition to that lawsuit, a neighborhood group called The Calumet Project and the Oakland-based environmental justice group Global Community Monitor had filed a lawsuit against BP and the Indiana Department of Environmental Management charging local residents – disproportionately low-income and minorities – were at risk from the refinery expansion.

The plaintiffs agreed to dismiss the lawsuit June 7 after reaching an agreement with BP, meaning that in addition to the consent decree monitoring, the company will install open path monitoring that uses ultraviolet light to measure chemicals upwind and downwind of the refinery.

“Paired with the weather and wind data, it will allow you to see what the air quality was, what the benzene level was, when the air crossed the facility upwind and what BP actually added in,” said Global Community Monitor executive director Denny Larson, noting that similar monitoring has had positive results at refineries in California.  “It factors out the additional sources in the area – that’s why we want these systems in heavily industrial areas, with so many facilities that have  the same types of emissions.”

Calumet Project program coordinator Bessie Dent, who lives a few miles from the refinery, said the group is seeking a grant to train residents to analyze and keep tabs on the monitoring results.

“The pollution is still going to be there, but with these monitors the information is supposed to be posted within 24 hours; in the past it would take 18 months to see what was dispersed,” she said. “There will always be health concerns, but this is a great victory and a move in the right direction.”

Larson and other advocates have called for more refineries to adopt the technology.

“I believe there’s a long-term benefit. As the data comes off the monitors, it may point to areas in refineries that need improvement or fixing. If you get a large benzene spike in a certain area of the perimeter, using wind direction and people on the ground you can literally go out and find the leak.”

In addition to the monitoring, BP will pay an $8 million fine to the government and spend $9.5 million to reduce greenhouse gas emissions, which are not currently subject to legal limits.

“Everyone involved regards it as a win-win,” said BP spokesman Scott Dean. “We are pleased to reach an agreement that protects jobs and the environment and ensures the refinery will be able to provide jobs for years to come in Whiting.”

He noted that the $3.8 billion refinery expansion, scheduled for completion mid-2013, will create about 80 new permanent jobs and thousands of contract and temporary jobs. Along with tar sands it allows the refinery to process different types of crude oil, including from the Bakken Shale in North Dakota.

“It used to be that crude flowed up from the Gulf Coast to the Midwest,” said Dean. “That has changed, now it’s flowing from north to south. This modernization allows us to process a wide variety of crude oils from a number of sources coming onstream.”

Ann Alexander, a Natural Resources Defense Council senior attorney involved in the settlement and the lawsuit which precipitated it, said the decree will be precedent-setting for other refineries charged with violations of the Clean Air Act.

“In the future if the Department of Justice is doing another consent decree and an industry asks for less (requirements), they can say, ‘Look at Whiting,’” she said. “This shows that if you are going to process tar sands in the U.S., you will have to pay the price to do it right.”

The EPA had previously charged BP with violations of a previous 2001 consent decree and of the Clean Air Act, including violations of New Source Review and New Source Performance Standards. The NRDC and other groups that sued BP had argued that the company did not accurately estimate its increased emissions in applying for permits for the expansion, including by failing to account for increased flaring of waste gases and a new coker to remove “gunk from tar sands oil,” in Alexander’s words; and by overestimating the offsets allowed for previous shutdowns.

By underestimating emissions BP tried to avoid installing best available control technology that otherwise would have been required, Alexander said.

“At a facility like a refinery with so many different emissions sources, miles of pipelines and so many components of the process, it’s not like a coal plant with limited sources of emissions,” said Alexander. “You can imagine there is much potential for mischief.”

Along with the EPA, BP and the NRDC, parties to the consent decree include The Sierra Club, Save the Dunes, The Hoosier Environmental Council, The Environmental Law and Policy Center, The Environmental Integrity Project and Susan Eleutorio and Tom Tsourlis, a married couple who live nearby.

“When people hear about things like climate change and pollution, they often feel like there’s nothing they can do,” said Eleutorio, a professional folklorist and educator, who suspects emissions from the refinery and other nearby industry caused her to become seriously ill last year after she started biking four hours a day in preparation for a 100-mile charity ride. “But this shows there is something you can do about it, whether it’s writing a letter to the editor or going to a permit hearing or just being aware of the issues, people can have a huge impact.”

The Sierra Club, NRDC and ELPC are members of RE-AMP, which also publishes Midwest Energy News.