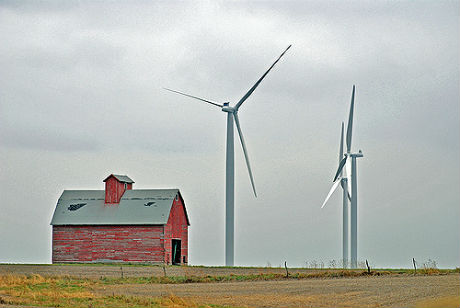 Wind energy will pump almost $6 billion into Illinois’s economy over the course of several decades, much of it concentrated in cash-strapped rural areas, according to a report released Tuesday by the Center for Renewable Energy at Illinois State University, during the annual Advancing Wind Power in Illinois conference.

Wind advocates are pointing to the report in asking Congress to extend or make permanent the federal Production Tax Credit (PTC) for wind energy beyond its scheduled expiration at the end of 2012.

Illinois is probably not the first state that comes to mind when many people think of roaring winds – Chicago’s “Windy City” moniker refers to loudmouth politicians, not climate. But the report shows Illinois is a poster child for how a state with even moderate wind resources can gain from aggressively tapping the renewable resource and their industrial and transmission infrastructure; and crafting state policies to facilitate wind development.

Illinois’ wind power capacity has grown more than 66-fold in less than a decade, according to the American Wind Energy Association (AWEA), from 50 megawatts in 2003 to 3,360 megawatts today. As of April 2012 Illinois ranked fourth nationally in installed wind capacity, though it ranks only 14thin wind resources, according to AWEA. In 2011, Illinois installed the second most new wind power of any state, about 800 megawatts.

The report says that the state’s 23 projects larger than 50 megawatts – which account for 99 percent of total wind capacity – over the course of their 20- to 30-year lifetimes will mean:

The report describes the different ways landowners can benefit from wind turbines:

Landowners can be compensated in a variety of ways: option payments, construction disturbance or installation payments, land leases/easements, and/or royalties. While royalty payments represent a percentage of gross income received by the wind farm owner from the sale of power, land easements represent a specific amount paid to the landowner each year and are typically adjusted for inflation.

The report notes that the property tax impacts of wind development can benefit schools even more than other new industries would, since many new industries bring an influx of workers, and hence new students, to a school district, increasing the district’s costs even while pumping in new tax revenue. Post-construction, wind farms only require a handful of workers, generating property tax revenue with little or no increase in the school’s costs.

The study uses the Jobs and Economic Development Impacts (JEDI) Wind Energy Model, developed by the National Renewable Energy Laboratory, to quantify the impact of wind farms nationwide using state-specific multipliers. It measures direct job creation in construction, engineering, maintenance, trucking and the like; along with indirect job creation driven by increased demand for gravel, steel, copper, heavy equipment and other supply chain materials and components – many of them sourced or fabricated locally or regionally.

The study also looks at induced impacts – the increases in household spending when new income comes into a community. Specific training is crucial to be sure local residents can take advantage of the permanent jobs created by wind turbines. The report notes a variety of wind-related programs at Illinois colleges, including an interdisciplinary wind undergraduate major instituted at Illinois State University in 2008, with a technology track and an economics/public policy track.

There are multiple reasons wind development has thrived in Illinois. An ambitious state Renewable Portfolio Standard passed in 2007 gets part of the credit, calling for 25 percent renewable energy by 2025, three quarters of it wind. Wind development in northern and central Illinois is also driven by its positioning in the PJM Interconnection market. (Southern Illinois is part of the MISO regional transmission organization).

Since Illinois has better wind resources than many of the PJM states to the east, and since it has robust transmission infrastructure, Illinois wind power can be sold on the PJM market to help other states meet their renewable portfolio standards. The vast electricity demand in the Chicago area, surrounded by farmland with good wind resources and many transmission lines, also provides a ready market for wind energy.

The report notes that Illinois benefits particularly from the development of taller wind towers that can take advantage of stronger winds higher in the sky, which yield an exponentially greater amount of energy than shorter turbines.

State legislation and policy have also helped. The Illinois Commerce Commission in December 2009 approved an innovative plan to allow long-term contracts for wind power, a move which the report says could help drive wind development in the future. State policies ensure wind developers can benefit from tax benefits for hiring economically disadvantaged people and for developing in the state’s Enterprise Zone.  State legislation mandates that the property tax value of wind turbines be assessed the same way statewide, with Illinois levying among the nation’s highest property taxes on wind development.

“No business likes to pay high taxes but the impact on a community is much greater, a 100 megawatt wind farm coming in will provide millions in new property tax revenue to a rural community,” said Wind on the Wires public policy and membership manager Kevin Borgia. “There are not many other options that bring in that much new revenue. Wind farms can’t help every school district in the state, but for the ones that receive wind revenue it’s a major force.”

The report notes that in general, state renewable energy portfolios, along with the federal production tax credit, are major drivers of wind energy development. Wind advocates nationwide, including the report authors, fear that new wind installations will plummet if the federal PTC is not renewed or made permanent by Congress.

AWEA says that wind installations dropped steeply in the years after previous expirations of the tax credit. The American Recovery and Reinvestment Act (ARRA) in 2009 extended the PTC through the end of this year.

“We have 2,222 megawatts already permitted in Illinois, but without the PTC I don’t see much of that if any of that getting actually constructed,” said Center for Renewable Energy director and Illinois State University economics professor David Loomis. “The odds would be very little to zero without the PTC.”

Borgia said that if the PTC ends, he fears wind development will slow to a crawl in Illinois and the rest of the Midwest.

“We’re just looking to level the playing field,” said Borgia. “This isn’t a subsidy – this is a tax credit. You’ve got strong bipartisan support for it…and you’ve got big wind development happening in deep red areas. This is a bipartisan issue, but it’s just tied up by the gridlock in Washington.”