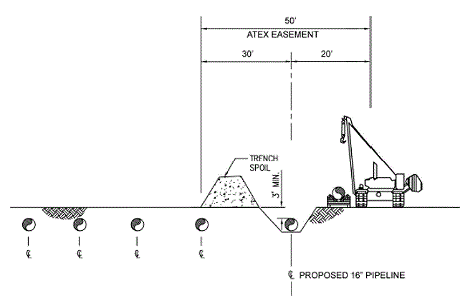 When representatives of Enterprise Products Partners approached Ohio farmer David Hyde last fall saying they planned to lay a pipeline on his farmland, he wasn’t concerned. Enterprise already had a pipeline there, Hyde said, and he felt like they did a good job maintaining and monitoring it.

But several months later the company got back to him and said the route for their new Appalachia to Texas or ATEX Express pipeline had been changed, and it would instead go through another of his three separate family farms in Licking County, totaling 200 acres.

“I said no it isn’t going there – that’s one of my better hay grounds, and it’s hard to get other property around here, everything’s tied up,” said Hyde, whose family has been farming in the area since 1972. “So she brought in her boss. He was arrogant right from the start…That’s when the trouble began.”

How the pipeline will work

The ATEX Express pipeline will carry liquid ethane from the Marcellus and Utica shales in Pennsylvania, West Virginia and Ohio to the Texas Gulf Coast, where it will be processed into consumer plastics. Natural gas extraction in the Marcellus shale has boomed in recent years with hydraulic fracturing, and the vast Utica shale which lies below the Marcellus appears poised to be a major source as well. It happens gas from these shales is also rich in the natural gas liquids ethane, butane and propane, which are separated from the gas after it is extracted.

The 1,230-mile ATEX Express route includes 369 miles of new pipeline crossing central Ohio to connect an Enterprise terminal in southwestern Pennsylvania with a hub in Seymour, Indiana. The rest of the ATEX Express route will reutilize existing pipeline, including a pipeline currently being used to ship refined gas, diesel and other products from the Gulf Coast to the Midwest.

As is often the case with pipelines, Enterprise was granted eminent domain rights to acquire the easements it needs for new pipeline across Ohio.

Enterprise spokesman Rick Rainey said he was not aware of Hyde’s situation, and that the company always works hard to build good relationships with landowners.

“The way we look at this, this pipeline is going to be in the ground for a number of years and it’s imperative we establish a strong working relationship from the start,” Rainey said. “The key to that is negotiating a right-of-way agreement they will be comfortable with. It’s not just that we put it in and we’re gone. We have personnel inspecting it, making sure it operates safely. It’s a long-term relationship.”

Hyde said the company offered him $19,000 for the use of his property, an amount he said is much less than the damage it would cause the family enterprise, since it would “split the farm in half” and make it nearly impossible to access by road.

“If they do it I will never be able to get in there and cut the hay for my cattle, and we can never sell it for development or anything like that,” he said. Hyde also worried that surveyors coming from neighboring farms or farms in other regions could spread foot and mouth disease or other pathogens to his land.

As is always the case with eminent domain, landowners like Hyde cannot deny an easement for the pipeline, but they can negotiate the price they are paid and other aspects of the situation.

Unlike oil or gas extraction leases on private land, where a landowner may get a constant stream of royalties, payments for pipeline easements are a one-time deal. Rainey said every agreement is different, and there is no way to generalize the dollar amounts or terms.

“If you have one landowner who uses the land for a hay field, and one who has timber, they would be compensated differently,” he said. “Once the pipeline is in place, with very few restrictions they can pretty much use it as they did before. For agricultural purposes we bury it deeper so it won’t interfere with farming equipment. The only restrictions are you can’t build permanent structures on top like a house or a swimming pool, and you can’t plant deep-rooted vegetation.”

William Goldman, a Columbus attorney specializing in eminent domain, said Enterprise has been offering landowners $1,500 to $9,000 per acre and $1,500 for trees cut down, amounts he considers too low. He said the company also is not offering landowners compensation for reductions in the value of their property adjacent to the pipeline easement.

Goldman and his partner Michael Braunstein have been holding public meetings around Ohio to inform landowners of their rights and to recruit clients. They are also representing Hyde.

Goldman said that they are paid a percentage of the amount landowners negotiate above the company’s initial offer, “so there’s no risk to the property owner.” He said they have negotiated deals up to five times the original offer, largely through appraising the property value with and without a pipeline and demanding compensation for the difference.

“The pipeline companies tend to pass this off as sort of a casual thing, but these lines are not benign,” said Goldman. “The fact that a pipeline is going across your property has an adverse effect on the value of your property. You can imagine if you were a buyer looking at two pieces of property and one had a gas line going across it and one didn’t, you’d be more apt to pay more for the one that didn’t.”

Rainey said the company has thorough safety procedures, and the possibility of leaks or accidents is not usually covered in easement agreements.

“We have a comprehensive safety and integrity management program in place,” Rainey said. “Our system is monitored 24-7 from a control room, we have valves at certain points allowing us to isolate a particular section, our field people are constantly trained and conduct drills with local emergency responders. Pipelines are by far the safest way to transport energy.”

Proper use of eminent domain?

The attorneys have noted that new pipelines are often built along the paths of existing pipelines, so once landowners have one pipeline on their property it is more likely they will see a second one built in the future.

“The easement will be there through generations or if people sell the property,” said Goldman. “The only time it ceases to be effective is if they abandon use of the pipeline. And even then there should be requirements as to how they handle it.”

University of Cincinnati research associate psychiatry professor Dr. Jeffrey Welge said the law firm has helped him get a fair offer for value loss to a property he owned in Indiana. Last winter the company offered him $7,000 for the pipeline crossing a 70-acre parcel on which he planned to build a home for sale, he said. It’s not farmland, Welge noted, and had value mainly as a potential home site, meaning the pipeline could significantly affect its value in the eyes of potential buyers. Enterprise eventually agreed to pay him $35,000.

“When it occurred to me that I had no choice, that it was coming through and it was just a matter of what I was going to get for it, I was frustrated,” Welge said, noting that he found Enterprise representatives “quite aggressive.”

The 20-inch pipeline is slated for construction starting in spring 2013 with shipments starting in the first quarter of 2014. The company has said the pipeline will create 700 jobs in Ohio and 4,000 temporary and permanent jobs total, and the company will pay property taxes. Rainey said there are ripple economic impacts during construction, with workers staying in hotels and eating in restaurants, and supplies purchased locally. He called it “an economic stimulus” for the state.

“Eminent domain laws were put in place for public utilities, but now we have these private for-profit companies coming in here using these laws to their advantage,” said Hyde. “And as for all the economic development they promise, the surveyors, the lawyers, the maintenance crew – they’re all from out of town. They’re all nice guys, don’t get me wrong, but they’re not from here. In an area with 12 or 13 percent unemployment, that doesn’t look good.”