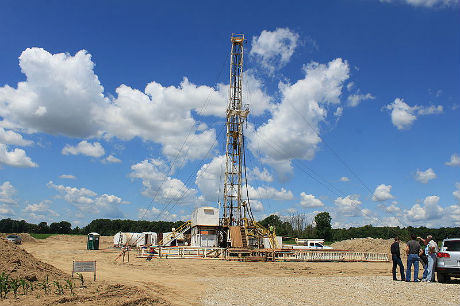 A drilling rig in Saline, Michigan, on June 22. (Photo by Dwight Burdette via Creative Commons)

The answer to Michigan’s energy woes is right beneath our feet. So says an Obama administration official who points to “un-mined gold” in the Great Lakes state and using enhanced oil recovery to get at it.

McConnell says there are billions of barrels of oil in Michigan alone, adding that the U.S. has spent $5 billion on “clean coal energy,” with another $10 billion invested by industry.

So where do McConnell’s figures come from? The “un-mined gold” is based on a report done for DOE that contains the map below (page 16).

The map estimates that Illinois and Michigan have 1.2 billion barrels of potentially recoverable oil.  Which means McConnell “should have said there are billions of barrels of recoverable oil across the country, and Michigan specifically potentially has approximately 500 million barrels,” according to a DOE official contacted by Midwest Energy News.

The job claims are based on 30-year projections from the U.S. Carbon Sequestration Council.

“There are a number of emerging applications in this regard, but the major near-term opportunity is in CO2 enhanced oil recovery (EOR), or injecting CO2 into depleted oil wells to recover untapped oil,” McConnell writes in a blog post at energy.gov.

“CO2-EOR is a well-established and mature technology already providing about 5 percent of U.S. oil production, and we estimate that CO2-EOR has further potential to add 60 billion barrels of crude oil to U.S. recoverable resources. That’s three times current proven reserves. The U.S. oil industry could make much greater use of injection with a larger supply of CO2, such as from industrial sources and power plants.”

Some critics say sequestering carbon is just another way to prolong the use of coal-fired power, a major contributor to climate change, and that the safety of the technology has yet to be proven.

“We are generally supportive of enhanced oil recovery as long as the operation are conducted in a environmentally responsible manner,” said James Clift, policy director for the Michigan Environmental Council in Lansing.

“We are skeptical that a significant amount of carbon would ever be sequestered in this manner, and don’t believe this is where scarce public research dollars devoted to energy should be spent.  We would rather see it focused on energy efficiency and renewable energy projects that reduce the overall demand  for fossil fuels.”

McConnell’s audience in Kalamazoo included local government and university officials and industry leaders. Western Michigan researchers have been studying carbon capture technology since 2004. The university has received close to $2 million from the feds since 2005 to research the potential for using deep geological formations in Michigan as carbon capture sites for emissions from power plants and other sources.

McConnell continues making the rounds promoting enhanced oil recovery. He’s visited other states, including Pennsylvania on May 2, and has plans for more stops across the country.