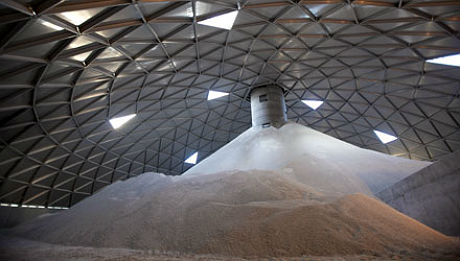 In 2005, Colin Kelly, then president of Prairie State Generating Company, was sworn in at a local zoning board hearing in Nashville, Illinois, a small town nestled in cornfields 60 miles southeast of St. Louis.

The company wanted to begin building the Prairie State Energy Campus, which is now the largest coal-fired power plant under construction in the United States.

The 1,600 MW plant would generate thousands of tons of coal ash, which includes toxins like arsenic, mercury, and cadmium. So the local zoning board in Washington County, Illinois, asked Kelly what his company planned to do with the plant’s coal ash if they granted the zoning variance needed to build the plant.

“All waste products will be disposed of outside of Washington County in disposal sites properly permitted by the state of Illinois,” Kelly told the zoning board.

That was then, and this is now.

On June 26, the Washington County Board met behind closed doors with the lawyer from Prairie State and passed an amendment to an ordinance that granted the company permission to build a 720-acre coal ash landfill on flat farmland near the controversial Marissa, Illinois, plant.

The amendment allowed the company to bypass the normal zoning process, which would have involved public hearings, and negotiate a contract for the landfill with the county—all out of the public eye.

Critics of the company contend that the coal ash landfill jeopardizes air and water quality in the area. They say that it will add huge costs to a project that’s already $1 billion over budget. And they suspect Prairie State pressured Washington County into approving the landfill by threatening legal action if the county didn’t approve it.

Washington County officials admit that they had to deal or go to court, but neither they nor Prairie State will say what the possible litigation was about.

That deal made small cities across the region the de facto owners of the project who are now on the hook for its costs. They now own 95 percent of the project, says the company that manages the project, Prairie State Generating Company.

About $30 million of the owners’ money will go to Washington County under the terms of the agreement approved at the June 26 meeting. The company will also pay the county $250,000 a year from 2012 to 2015. And beginning in 2015 Prairie State will pay the county a tipping fee of 30 cents per ton of coal ash dumped at the newly approved landfill, and 10 cents per ton trucked out of the area on county roads, said Gary Suedmeyer, a Washington County board member and chair of the board’s finance committee, which crafted the agreement with Prairie State.

Suedmeyer says the county made the deal to avoid costly litigation.

“Our attorneys and powers that be told us there was a good chance if we did not negotiate they could go ahead and do it on their own,” he said. “So if we tried to fight, nothing would be gained other than a big bill over court fees.”

So did Prairie State actually threaten to sue Washington County if they failed to approve the landfill, and if so, on what grounds?

“That was never explained to me,” said Brent Schorfheide, another member of the Washington County Board.  Suedmeyer said he was not at liberty to say because of the closed proceedings. And when asked that question, Prairie State spokeswoman Ashlie Kuehn responded, in an emailed statement, “no comment.”

As for the plant’s neighbors, Schorfheide said, “It sucks for the people who live there, but there’s a lot of things we can do with the money we made on the agreement.”

Dale Wojtkowski, who owns two acres directly across the road from the Marissa, Illinois, power plant, accuses Prairie State of being secretive and disingenuous in its maneuvering on the landfill, and says it’s not the first time.

At the June 26 meeting, for example, Wojtkowski mentioned that Prairie State’s president had promised under oath in 2005 that there would be no coal ash disposed of in Washington County.

“It just kind of amazed me the answer I got: that it was because the people who owned the property were unwilling to sell it at the time,” Wojtkowski said.

Kuehn confirmed that was the reason for the change of heart. “While PSGC acknowledges that company leadership did state that intent in 2005, circumstances did change (the ability to purchase the land) that provided an opportunity for this monofill construction.”

Safe for water, safe for people?

This type of landfill differs from coal ash ponds used to dispose of wastes from other coal-fueled power plants. It was a coal ash pond that overflowed in Kingston, Tennessee in 2008, dumping more than 5 million tons of toxic coal ash sludge into the Emory River and triggering a $1 billion cleanup operation.

But dry coal ash disposal brings its own hazards, Barkley said. “We’ve heard complaints from people up to a mile away about ash hitting the side of the house and respiratory irritation.”

To prevent the ash from blowing around, coal companies sometimes spray it with water, which can then leach off the coal ash, carrying pollutants with it. The landfill’s location heightens the risk, Barkley said. The landfill would cover more two linear miles of creeks with coal ash, as well as more than three acres of wetlands. The site is on two tributaries to the Kaskaskia River, which supplies drinking water for many downstream communities, she added.

“It’s an area that’s very sloshy with flooding—not a good area to dam up streams for mining and store coal ash,” Barkley said.

More than 100 sites in the U.S. have groundwater contaminated by coal ash, according to a 2010 report from the Environmental Integrity Project along with EPA data.

Kuehn, in an emailed statement, said Prairie State’s coal ash “will be dry, though a slight bit of moisture will be added to prevent dusting.”

Nevertheless, Prairie Rivers Network, the American Bottom Conservancy, and the Illinois chapter of the Sierra Club wrote in April to the U.S. Army Corps of Engineers opposing the company’s application for a permit to fill the wetlands. The Corps has not yet decided whether to grant the permit.

In a public presentation on July 11 that was organized by Prairie State, toxicologist Dr. Lisa Bradley told attendees that the coal ash landfill was safe. Coal ash, she says,  is similar to other natural material, including soil, in its levels of heavy metals and arsenic, and the expected levels in coal ash at the landfill are too low to be dangerous, she said, according to a PowerPoint presentation supplied by Prairie State.

Bradley, who was recently elected to the executive committee of the American Coal Ash Association, gave a similar presentation on July 18.

Kuehn said the landfill will have “some of the most stringent standards in the country.” It will be lined with a three-foot-thick clay liner and a synthetic liner and surrounded by more than 30 groundwater wells for monitoring potential contamination, she said.

Critics also question why Prairie State’s planned landfill is needed at all. “It’s one of the big mysteries,” Buchanan says.

The company already has two disposal sites nearby that have been approved by regulators to hold ash from the massive power plant.  One, a spent coal mine site called the Randolph Preparation Plant, has more than 500 acres of coal ash landfill space available and 22-year life expectancy, according to documentation submitted by Peabody Energy to the Illinois EPA in 2005. The other site, another strip-mined area called the Jordan Grove, has 953 acres available. The Illinois EPA projected even more capacity there.

“My concern is that they’re just banking storage capacity for coal ash into the future and are getting it in under the wire before coal ash regulations,” Barkley said.

Prairie State denies that. Suedmeyer confirms the new agreement with Washington County prohibits the company from shipping in coal ash from other sites.  And Kuehn said that Prairie State Generating Company owns just one of the sites. The second site “is owned by Peabody Energy, to which Prairie State does not have disposal rights.”

Prairie State was able to buy the land adjacent to its power plant only in 2010, Kuehn added. That then allowed the company to consider building a coal ash landfill that “will allow Prairie State to transport the coal combustion residuals via a conveyor system, and keep it off the railways, which is the current transportation path for disposal.”

Despite Washington County’s approval of the project, the planned coal ash landfill is not a done deal, Buchanan said. In addition to the Army Corps permit, Prairie State needs two separate permits from the Illinois EPA—one to landfill the material and one to allow water pollution.

And whatever the company promises regulators or investors or Washington County about protecting the environment from the hazards of coal ash, critics remain skeptical. “There’s a growing group that’s realizing this is a bad idea,” Barkley said, “and it’s just getting worse and worse.”

Dan Ferber is an Indianapolis-based freelancer whose work has appeared in Wired, Popular Science, Science, and other outlets. He’s the co-author, with the late Paul Epstein, MD, of Changing Planet, Changing Health: How the Climate Crisis Threatens Our Health and What We Can Do About It.