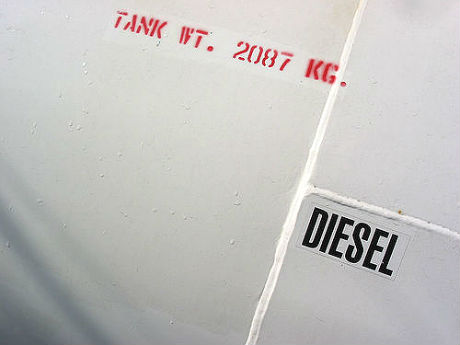 When temperatures pressed into the mid-90s last week, the emergency backup generator kicked on at North Road Dairy.

A loss of power could cost him a lot of milk money. But a power outage isn’t why North Road Dairy’s backup generator was burning diesel last week.

The generator was remotely switched on by its local utility as part of a preemptive move, to ease demand for grid power before the area’s electric system became unstable.

In exchange for reducing its grid power use during peak hours, North Road Dairy annually saves more than $5,000 on its electricity bills.

The U.S. Environmental Protection Agency (EPA) is in the process of setting limits on how long backup diesel generators can be used in so-called demand response programs. The current proposal would allow for up to 100 hours per year — a limit environmentalists say is too high.

“We like demand response that’s truly load reduction,” says John Moore, a senior attorney with the Natural Resources Defense Council (NRDC) in Chicago. “We don’t like it, though, if the source of the demand response is actually dirtier backup generators.”

The Natural Resources Defense Council is a member of RE-AMP, which publishes Midwest Energy News.

It’s sometimes maligned by critics as “dirty D.R.” — short for “demand response.” To the utility or grid operator, it looks like the customer is reducing its energy consumption. In reality, the customer is just shifting its power load from the grid to on-site generators, which often have fewer pollution controls.

Moore says too little is known about the volume of backup generators that might participate, though it likely includes several thousand megawatts in the Midwest and Great Lakes area electricity markets. Some of those generators may be more polluting than utility peaking plants, he said.

That proposal drew several objections from small municipal utilities and energy service companies, as well as their customers and participants. The agency went back to the drawing board and came back with the 100-hour proposal in May.

“I think there’s been more made of it than what it really is,” says David Brewster, president of EnerNOC, a Boston-based energy services company that bundles other companies’ available load reductions, or “negawatts,” and sells them in electricity markets.

The value for these short-term energy savings went up this year thanks to a new federal rule that requires grid operators to pay for demand response “negawatts” at the same rate they would purchase megawatts generated by power plants.

The vast majority of load reduction that EnerNOC bundles and sells comes from actual curtailment, says Brewster. Some comes from switching on backup generators, but he doesn’t expect that portion to change much under the proposed rule change.

The EPA already allows backup generators to run for up to 100 hours annually for testing and maintenance before requiring additional pollution controls. The generators are like cars: they need to be run every so often to keep them in working condition, Brewster explains.

The proposed rule change would simply expand the allowable uses for those 100 hours to include emergency demand response. Firing generators for these programs might eliminate the need for some routine maintenance, so the total hours of use may not change much, Brewster says.

And allowing grid operators to use backup generators when needed gives them more flexibility to avoid outages, he says.

“It’s better to proactively dispatch a subset of these units to avoid blackouts than it is to experience a blackout, when every single backup generators on the system is going to run for hours if not days until the system is restored,” says Brewster.

But some say there are better, cleaner ways of managing the grid.

Utilities like Southern California Edison are proving that demand response programs that use efficiency only can work on a massive scale — up to 150 megawatts. The technology exists to make those load reductions fully automated for customers.

“In my humble opinion, that’s the direction we should be moving in,” says Clay Collier, general manager of Akuacom, a Honeywell subsidiary that makes tools for managing demand response programs.

“I don’t see any benefit to expanding what you could call dirty D.R. You’re still polluting and running backup generators. I think it has it’s place. Don’t kill it, but let’s move in the other direction.”

NRDC worries the 100-hour limit will cause things to creep toward greater use of diesel backup generators in non-blackout situations.

Many demand response programs, such as summer air-conditioner savings programs, have seen little use in recent years. But as the economy recovers and aging coal plants close, the need for demand response is likely to grow, says Moore.

“Ultimately, backup generators should be run to provide power in the case of a power failure, with a very limited extra time for other system grid emergencies,” says Moore.

The public comment period for the EPA’s proposal runs through August 9.