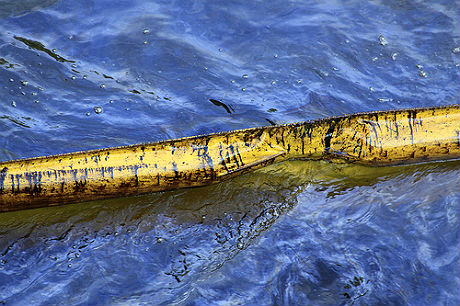 Cleanup boom in the Kalamazoo River on August 1, 2010. (Photo by Kevin Martini via Creative Commons)

Two years after the spill of more than 800,000 gallons of tar sands crude into the Kalamazoo River in Michigan, the cleanup is still not complete, and the event has become a galvanizing touchstone for opponents of the Canadian oil sands industry.

To mark the second anniversary of the spill this week, environmental groups in the U.S. and Canada have been staging “We Are the Kalamazoo” protests including “human oil spills” of people dressed in black and a virtual “Conga Line, Not Pipeline.”

The July 25, 2010 spill has drawn attention to the transport of tar sands oil to U.S. refineries on an existing, often aging network of pipelines, along with proposals for new major pipelines like the controversial Keystone XL. Earlier this month, the National Transportation Safety Board  issued a $3.7 million fine and numerous violations against Enbridge Inc., the Canadian company with a Texas subsidiary that runs the pipeline ruptured in Michigan.

The National Academy of Sciences has launched an investigation of the risks of shipping tar sands oil by pipeline, and earlier this week concluded a public comment period on the makeup of the 12-member commission carrying out the study. The academy’s results will be nonbinding but could affect the fate of the Keystone XL pipeline and the import of Canadian tar sands in general.

Also this week, the National Wildlife Federation released a report examining the Michigan spill and Enbridge’s larger performance record and plans. In May, Enbridge announced a $3 billion project including the replacement and expansion of Line 6B – the one that spilled in Michigan – to move more tar sands and other heavy Western crude oil to refineries in the eastern U.S. and Canada. The project involves pipelines crossing Minnesota, Wisconsin, Michigan and northern Illinois.

The NWF’s report says Enbridge’s own records indicate it was responsible for about 800 spills releasing nearly 7 million gallons of oil in the U.S. and Canada between 1999 and 2010: “A company with Enbridge’s safety record cannot be allowed to expand without strict oversight and scrutiny. Otherwise, the risk of another serious spill is too great.”

Last year the Natural Resources Defense Council published a report analyzing the potentially increased risk of spills, and increased hazards from any spills, on pipelines carrying tar sands oil diluted with chemicals to make it possible to transport the thick, gritty substance. A study conducted by the Alberta government disputed those findings, but also acknowledged a lack of peer-reviewed research on the matter.

“The bottom line is, tar sands are different than the conventional crude that has historically been moved on the US pipeline system,” Swift said.

The NWF and NRDC are both members of RE-AMP, which also publishes Midwest Energy News.

Diluted tar sands oil is more acidic than conventional crude, critics say, and also more corrosive thanks to higher sediment content. “It’s essentially like sandblasting the inside of the pipe,” said Swift. “And it needs to be diluted with chemicals at high pressure and high temperature … which all increases the risk of internal corrosion and stress cracking.”

In Michigan, he added, “This combination created risks and challenges our emergency responders were not equipped to handle.”

Many residents around Marshall, Michigan.had no idea there was a major oil pipeline, no less one carrying tar sands, in their area until the spill. Deb Miller owns a business and a home right near the Ceresco dam four and a half miles from where the Enbridge pipeline broke gushing oil into a creek and then the Kalamazoo River. On the press call she said:

For months we looked at a black river…I know it’s hard to envision an entire river could be black, but the photos I have shown people over and over again show it. It’s hard to imagine what a million gallons look like. But today we are still looking at signs of oil.

Organizers of the “We Are the Kalamazoo” protests, including the climate change-focused group 350.org, plan events in Vermont, South Dakota, British Columbia and Michigan in the coming week.