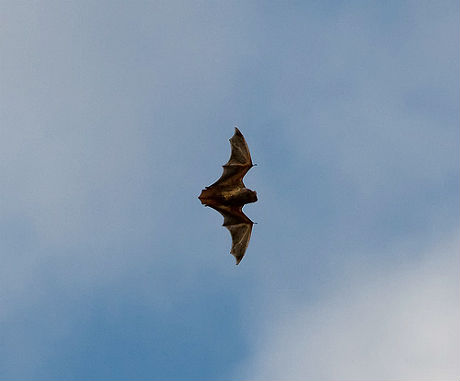 (Photo by e_monk via Creative Commons)

Altamont Pass in California is one of the world’s largest wind farms — and most notorious among bird lovers. Much of the anxiety around wind turbines and raptor collisions comes from the large number of eagle fatalities reported from this single cluster of wind farms east of the Bay Area.

In 2005, the wind farms’ operator sought to reduce bird deaths by replacing 126 turbines with 26 larger ones that rotated more slowly and that were spaced farther apart. Over the next few years, bird collisions with the newer turbines were 66 percent lower compared to the older turbines.

But there was an unexpected side effect: bat fatalities were 800 percent higher on the newer, larger turbines.

When it comes to preventing wildlife fatalities at wind farms, scientists are learning that bats are indeed a whole different animal than large birds.

Strategies that have worked for minimizing bird collisions have been ineffective, or in some cases counterproductive, for bats, which play a critical role in plants pollination and provide billions of dollars worth of free pest control to the nation’s agricultural industry.

Laura Ellison is an ecologist with the U.S. Geological Survey in Fort Collins, Colorado, who has spent the last 20 years studying bats and other small mammals. Earlier this month she presented on the bat and wind farm issue at the North America Congress for Conservation Biology.

“The newer, larger turbines seem to be worse for bats,” Ellison said in an interview last week. Researchers are just scratching the surface in understanding why that is.

A few theories exist for why bats and blade collisions occur. One is that bats just happen to be in the wrong place at the wrong time, but there’s also evidence that bats, particularly tree bats, are actually attracted to wind turbines.

“Video recordings are showing that bats are just going towards these turbines. They see this tall structure on the landscape, and they’re very curious,” Ellison said.

They might be scoping turbines out as potential roosting sites, or maybe as places to meet a mate. Another hypothesis speculates that insects gather more densely around turbines.

The attraction theories might explain why siting decisions haven’t seemed to have worked in preventing bat collisions. With birds, building farms away from prime habitat or migration flyways is promoted as the best way to prevent collisions, but that hasn’t worked for bats.

“There doesn’t really seem to be a pattern,” Ellison said. Wind farms have been built in areas with little bat activity, but after construction they experience scores of bat deaths.

More research needs to be done on siting issues, she said.

It doesn’t help that we know relatively little about bat migration patterns. The small, nocturnal creatures are much tougher to study than birds. They roost in hard-to-find spaces and are active at night when they’re hard to see.

How many bats are killed annually by wind turbines? No one has a precise number, but the magnitude is undoubtedly in the thousands per year, Ellison said. “Most bat biologists don’t think that this is sustainable in the long run, with those type of numbers that are being killed,” she said.

There aren’t any consistent mandates or methods for counting bat fatalities, and many factors that can skew the results. Carcasses can be hard to spot in certain habitats, and they’re easy snacks for scavengers. Different companies use different methods for accounting for these factors.

Another variable is “searcher efficiency” — some people are better at spotting dead bats than others. Researchers are experimenting with using scent dogs to find bat carcasses. They seem to perform better than people, but even canine noses have variation in their performance.

Ellison said she’s not in a position to tell wind farms what do to, but she stressed the need for more research. That can be aided if wind farm developers help collect data about bats, in both pre-construction studies and regular surveys after that.

A lot of research is being done on potential bat deterrents, from acoustic frequencies to laser lights, that might be used to keep the animals from flying near blades.

Acoustic sensors are being placed at wind farms to study bat activity around them. Researchers are also using radar to try to better understand bat movements on a larger scale around the Great Lakes region, Ellison said.

Bat fatalities are most common in the fall, when tree bats are migrating, and they appear to be particularly active on nights with low wind speeds. One strategy that seems to work best for reducing collisions is to turn off turbines on fall nights when wind speeds fall below a certain threshold.