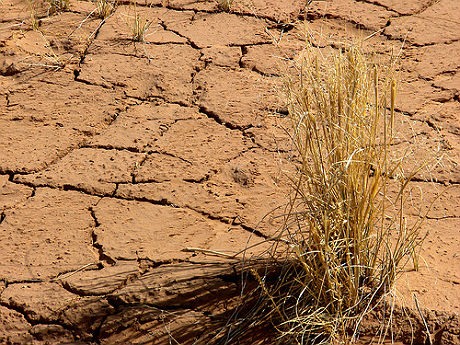 (Photo by arbyreed via Creative Commons)

This summer’s drought continues to raise questions about the economic and political sustainability of today’s corn ethanol in a hotter, dryer climate.

All of which makes Andrew Leakey‘s research at the University of Illinois at Urbana-Champaign particularly timely.

Leakey is part of a team of researchers who were recently awarded a $12.1 million grant from the U.S. Department of Energy to study drought-resistant plant DNA.

The goal: to identify genes that make crops more drought tolerant and potentially fit for planting on marginal farm land without irrigation.

“With climate change, drought stress is becoming increasingly frequent and severe,” says Leakey, an assistant plant biology professor. “A more drought-tolerant crop would be able to cope with that variation in growing conditions.”

The study’s “lab rat” is a type of grass called Setaria viridis, which is closely related to both corn and next-generation biofuel feedstocks like switchgrass.

Scientists at the Donald Danforth Plant Science Center in St. Louis took two plants that were different in almost every characteristic possible and cross-bred them to create 200 unique offspring.

“They all represent a slightly different combination of their parents’ DNA,” says Leakey.

At the University of Illinois at Urbana-Champaign, Leakey’s group is planting these offspring under a wide spectrum of wet and dry conditions. At the end of the growing season, they’ll identify the plants that did best under drought-like conditions and look for what’s unique about their genes.

If they can identify the snippets of DNA responsible for drought tolerance, the next phase will involved trying to incorporate those genes into corn, switchgrass and other biofuel crops to see if they have the same effect in those plants.

Don’t expect a breakthrough to help with this year’s drought, though. The study will take five years to complete.

Other collaborators on the project include the Carnegie Institution for Science, the University of Minnesota and Washington State University.