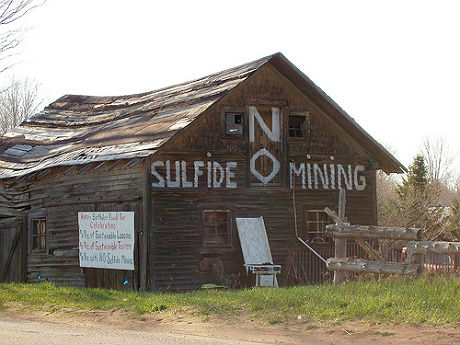 A barn adorned with anti-mining messages on the north side of Big Bay, Michigan. (Photo by savethewildup via Creative Commons)

Mining operations of course require a lot of electricity, and the major new transmission lines are considered partly driven by – and essential to – a new mining boom. But even with new high voltage lines and substations bringing more power to the region, individual mining projects will still typically need smaller individual lines connecting their operations up to the expanded grid.

As a case near the UP town of Big Bay shows, permitting and building these lines is not a simple process even for powerful mining companies, and residents who oppose new mining see these lines as a pressure point to try to slow down or block mine development.

Gene Champagne moved to Michigan’s Upper Peninsula from Detroit four decades ago after falling in love with the peace, quiet, remoteness and relative wildness of the area. But now Champagne and many other residents fear that a cluster of proposed mines will disrupt their bucolic existence (others in the region, which has a long legacy of mining, support the projects). The furthest along of these projects is the Eagle Project nickel mine near Big Bay, by the Rio Tinto subsidiary Kennecott.

Champagne and other locals, along with national environmental groups, have filed legal challenges against various aspects of the Eagle Project. Among these is a 36-mile power line completed last year, paid for by Kennecott and constructed by the Alger Delta Electric Cooperative, which serves the area.

Residents and attorneys allege that Kennecott got the line built under false pretenses, by denying that it was meant to power the Eagle Project in order to circumvent standard public process and permitting requirements.

A change in plans

In 2007, Kennecott received a permit for the Eagle Project under state mining laws saying it would be powered by three diesel generators, two to run simultaneously and one for backup. But such generators are expensive and dirty to run, and critics doubted whether they could really power the nickel mine.

Meanwhile, starting in at least 2006, according to meeting minutes and notes compiled by the group Concerned Citizens of Big Bay, Kennecott was in discussions with Alger Delta  to build the new 36-mile line that ended about 20 feet from its mine site, along with a new 10 MW substation. This line was not included in the original state mining permit, and the substation previously serving the Big Bay area was about 2.8 MW.

The electrical line, including 23 miles above ground and 12.5 miles underground below a county road, was completed by early 2011, with Kennecott paying the costs of almost $8 million. In November 2010 the company applied to the state for an amendment to its mining permit, asking to extend the electrical line the approximately 20 feet from the county road to the mine site. A public meeting was held in December 2010, and state officials decided the amendment requested was not a “significant change” and approved it without further public meetings or environmental studies.

Local mine opponents were furious, arguing that the electrical line should have been included in Kennecott’s original permit application and that the state should not have approved its inclusion after-the-fact without further public process and review.

Around that time Kennecott officials stated in meetings and documents that the electrical line was to power a “core shed” where ore samples from mining exploration were stored near the mine site. Mine critics objected.

“It doesn’t take a rocket scientist to figure out you don’t need 10 megawatts to power what is basically a storage shed,” said attorney Jana Mathieu.

So in August 2011, Big Bay Concerned Citizens, headed by Champagne and represented by Mathieu, filed an administrative petition challenging the Department of Environmental Quality (DEQ)’s approval of the permit amendment letting the mine hook up to the new power line. The petition said:

“Throughout the construction, Kennecott disingenuously claimed that the new power lines were only intended to supply a core shed. Not by coincidence, when the time came to hook up the mine to the grid, the power lines were already capable of powering the entire mining operation.”

In response to questions about the electric line and citizens’ concerns, Kennecott spokesman Daniel Blondeau said, “We have successfully defended our position and repeatedly demonstrated the integrity of Eagle’s design and engineering for the protection of the environment and safety of workers and the public. All of Eagle’s permits have been upheld under legal challenge.” He declined to comment further.

An administrative law judge ultimately dismissed the petition in February 2012 without granting oral arguments or discovery to the plaintiffs. Mathieu and her clients say they are considering their legal options.

“The way all these deals were made behind closed doors, the residents of Big Bay never had a voice,” Mathieu said. “I wanted discovery and a hearing for them to have a voice, even if it’s after the fact.”

The power line is also an issue in the National Wildlife Federation’s ongoing lawsuit challenging the state’s issuance of a mining permit. Among other things the suit alleges the company never did a comprehensive assessment of the impacts of the mine

“Neither the company nor the (state) agency has ever looked at the cumulative impacts or even the impacts at all of running the power lines,” said NWF attorney and UP resident Michelle Halley. “This line is buried in a road right-of-way – an already disturbed area. But what about when new homes or camps want to tie into that line, then those things will be permanently there in a region where previously there was no power, no homes, no camps.”

The NWF is a member of RE-AMP, which also publishes Midwest Energy News.

Halley said the building of massive new high voltage transmission lines proposed by ATC, and smaller lines connecting them to specific mining operations, could disrupt wildlife corridors and otherwise destroy habitat throughout the region, including near the Porcupine Mountains on Lake Superior, where the Canadian company Orvana Minerals is developing a mine.

Big Bay area residents are undecided whether they would have preferred to see diesel generators powering the Eagle Project, as approved by the state in Kennecott’s original permit.

“In general these generators are an extraordinarily dirty way of generating power, they’re usually just used for backup, they create real localized air quality problems,” said Natural Resources Defense Council staff attorney Meleah Geertsma.  “It looks like the project decided bringing in electricity is a cheaper and less polluting way to do it. It means they might have an easier job on their air quality permit. But it displaces the pollution problem – now you’re using electricity from a coal plant.”