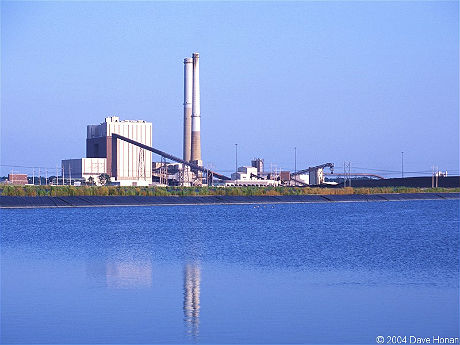 At the time the company Ameren proposed and received more flexible mercury limits than the state was otherwise requesting in exchange for its promises to also reduce sulfur dioxide beyond the state’s original expectations.

Scrubbers which remove sulfur dioxide from emissions also remove mercury, so the state agreed to give the company extra time to install the expensive technology and kill two birds with one stone.

Now the deadlines under that agreement are looming, with increasingly strict sulfur dioxide limits kicking in in 2015 and 2017. But power demand has plummeted since the economic crisis and cheap natural gas has made it less profitable to sell coal-fired power on the open market.

So Ameren is arguing it can’t afford to install scrubbers on several plants, and it is asking the state for more time. In filings and in a hearing before the Illinois Pollution Control Board last week, subsidiary Ameren Energy Resources (AER) has said it will likely close plants and lay off workers if it is not given more time to install the scrubbers and meet the sulfur dioxide limits.

Ameren operates five coal-fired power plants in Illinois, having already shut down its smallest coal-fired plants in Hutsonville and Meredosia. It is midway through installing scrubbers on its 2,000 MW Newton generating station in southeastern Illinois, but says it cannot afford to finish the half-billion-dollar investment by the impending deadline. Without an extension to finish the Newton upgrades, it says, other plants would have to be closed to conserve resources. That could mean closing  the 1,000 MW Joppa Energy Center in the state’s southern tip near the Kentucky border, or the E.D. Edwards  Energy Center in Bartonville, Illinois.

Labor unions, mayors of towns around Ameren plants, downstate Illinois economic development officials and even an Elks Lodge have filed public comments urging the state to grant Ameren more time, arguing that closure of any of its plants could have devastating economic impacts on small towns.

“The Joppa Energy Center currently employs 235 people, and these well-paying jobs boost the household income and spur economic development in our community,” wrote Billy McDaniel, mayor of the town of Metropolis near the Joppa plant, in a public comment. “The plant is also an imperative source of property tax revenue, which in turn supports essential public services like education and public safety.”

Ameren’s competitors, however, aren’t so sympathetic.

Dynegy Inc., which owns four coal-fired power plants in Illinois, has already invested $1 billion “funded by shareholders” allowing it to meet the state emissions limits, said spokesperson Katy Sullivan. She said it is “challenging” for a company like Dynegy when one of its competitors seeks an exemption from rules that other players have agreed to comply with. Both Dynegy and Ameren sell power in the MISO wholesale market.

“One reason that market prices are low in MISO and Illinois is that there is an oversupply of power generation capacity in MISO,” Sullivan said. “Prolonged low prices are typically a signal for uneconomic plants to exit the market. Granting AER its variance defies the market signals and potentially will keep uneconomic plants in the market longer than they would otherwise operate.  We believe the marketplace should determine which facilities are competitive and allowed to continue operation. Regulatory intervention, essentially picking winners and losers, serves to alter the playing field, creating unfair competitive advantages for some and not for others.”

She also noted that Ameren’s variance request “assumes some future power market recovery to justify the necessary investment” to comply with the state limits in the future, but there is no guarantee that recovery will ever happen.

Concerns about a ripple effect

Environmental groups and many citizens also oppose an extension for Ameren, arguing that the company should not be allowed to avoid pollution controls especially since Ameren has already been given more time to meet the mercury standards in anticipation of reduced sulfur dioxide emissions.

“We gave them the flexibility on mercury but now they are saying they don’t want to keep up their end of the deal,” said Faith Bugel, a senior attorney for the Environmental Law & Policy Center, who was involved in negotiating the 2006 state limits (the ELPC is a member of RE-AMP, which also publishes Midwest Energy News).

Bugel worries that if Ameren is granted an extension, other power companies like Midwest Generation, operator of Chicago-area and several downstate coal plants, will want the same treatment. The state negotiated individualized deadlines for emissions reductions with each company, but the overall mandates are similar.

Midwest Generation spokesman Doug McFarlan said the company has already invested $150 million to meet the state mercury and nitrogen oxide requirements at its Illinois plants, with the exception of two smaller units. He said he could not address whether Midwest Generation would request a variance related to sulfur dioxide, but he said efforts to reduce sulfur dioxide emissions are underway: “We are currently engaged in engineering, design and permitting activity and also are increasing our use of ultra low-sulfur coal.”

Meanwhile on the same day as the pollution control board hearing, Aug. 1, the U.S. EPA issued a violation notice to Ameren for in the past removing a scrubber on its Newton plant. The EPA is alleging a violation of the Clean Air Act, which says that when a major modification is made to a plant, the best available technology must be installed. Ironically the removal of the scrubber is the very modification that triggered the requirement that the best available technology — a new scrubber — be installed.

Ameren spokesman Brian Bretsch responded to questions about the notice of violation, declining to comment further:

We did remove scrubber equipment in 1996 under a lawfully issued Illinois Environmental Protection Agency state operating permit that specifically authorized such removal and with full knowledge of the U.S. EPA. The permit required a variety of performance testing and we fully complied with those requirements. This removal was performed with full notice to the regulators and performed years ago without regulator objection.

Bugel said her research indicates the scrubber was removed in anticipation of the plant’s switch to lower-sulfur Powder River Basin coal in order to comply with acid rain-related federal sulfur dioxide limits that took effect in 1995. She said an analysis of the Newton plant’s reported emissions shows a sharp increase in the mid-1990s, followed by a decrease about a year later, presumably when the switch to the lower-sulfur coal was made. She said the scrubber removed at the time would be an older model and probably not adequate to comply with the impending state limits.

Ameren has requested until 2020 to meet stricter sulfur dioxide standards, saying in its petition that without an extension “AER will be left with no choice but to cease operations at additional energy centers as its only other viable compliance alternative.”

The petition, filed in May, continues:

The mothballing of such facilities would be disruptive to AER and its employees, the local communities,  equipment suppliers and contractors, state taxing authorities and already struggling local school districts. The additional time AER seeks due to hardship will provide the needed time to allow recovery of the power market and the orderly planning, mobilizing and completion of the Newton FGD [flue gas desulfurization] project.

Ameren also argues it is at an unfair disadvantage compared to power companies in neighboring states that sell power on the same markets but are not subject to such strict emissions limits. Power plants in states that are not deregulated like Illinois are also typically allowed to pass the costs of new infrastructure on to ratepayers.

At the time of the 2006 agreement, Illinois power companies expected impending federal laws to soon level the playing field and require the same emissions reductions from generators nationwide. The stalling of the federal laws changed the situation, though the federal Cross State Air Pollution Rule and the Mercury and Air Toxics Standards will likely force plants in other states to install scrubbers and other pollution controls.  Companies must comply with MATS starting in 2015; CSAPR was slated to take effect in 2012 but was stalled in federal court pending judicial review.

Bugel thinks that Ameren blaming the Illinois government for possible plant closures is disingenuous. She noted that Ameren laid off 44 workers at the Joppa plant in June, even before the state decision on the sulfur dioxide limits. Given the market forces affecting coal power she thinks the plants are likely to close regardless of whether they get an extension.

“Ameren is asking us to have faith they will finish the project in 2020, but there’s not a whole lot of assurance in that,” she said. “It’s like reading tea leaves. Who knows what natural gas prices will be at that time, who knows what coal prices will be.  The state wants to do whatever it can to grow the economy and protect jobs; the state EPA and the Governor’s office do not want to be responsible for people losing jobs right now, and it’s so easy to blame the state. But the writing might be on the wall for these plants anyway.”

The Illinois Pollution Control Board has a Sept. 20 deadline to decide on Ameren’s request.