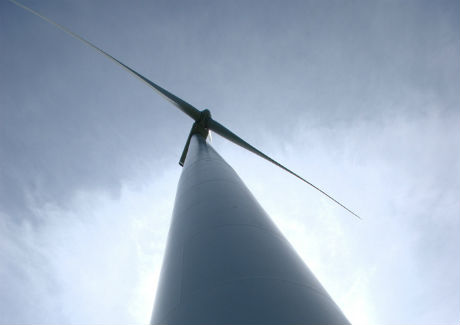 Wind energy is about achieve new heights in Minnesota.

A construction crew in southwestern Minnesota next month will begin erecting 15 wind turbines atop 100-meter towers, making it the tallest wind farm in the state.

The 30-megawatt Community Wind South project is being built by Juwi Wind of Boulder, Colorado, and will be located in Nobles County, northwest of Worthington.

It’s among a growing handful of wind projects, mostly in less windy states, that are reaching for the sky in order to catch better wind at higher altitudes.

“It doesn’t work on every project. It’s a site-by-site analysis that determines whether or not it makes sense to go to a 100-meter tower,” Van Sciver said. “On this particular site, it made economic sense.”

Bill Haman, industrial program manager at the Iowa Energy Center, said wind speeds at 100 meters are generally about 4.5 percent faster than what’s found at 80 meters. However, that correlates with a 14 percent increase in energy production.

“Those turbines should perform really, really well,” Haman said. “They’re going to be capturing those extra high wind speeds, but it’s going to cost them upfront.”

Van Sciver expects taller turbines to become more common, and thinks it’s inevitable that towers even taller than 100 meters will be built in the near future.

Juwi and other wind developers are already building towers taller than 100 meters in Europe. Federal aviation regulations make it difficult to exceed that threshold in the United States, he said.

“It’s become quite predominant in Europe, and we anticipated it becoming more common in the U.S. in the future,” Van Sciver said.

One of the reasons he expect turbines to get bigger is that more efficient turbines are changing the economics of building tall. One reason they’re more efficient is that blades are also getting larger.

Community Wind South’s turbines will have a rotor diameter of 92 meters. That’s pretty typical for turbines these days. Last year, about a third of turbines installed at rotor diameters between 90 and 99.99 meters.

A recent study by Swiss researchers concluded that “the bigger the wind turbine is, the greener the produced electricity is.”

The toughest part about assembling turbines that large is getting a big enough crane to lift segments into place. As far as transportation logistics go, its one extra truck per turbine.

“The sections themselves are not significantly larger than your typical wind turbine tower section,” said Van Sciver.

Crews were already working on preparing the foundations and turbine deliveries were expected to start Sept. 10, with construction complete in October.