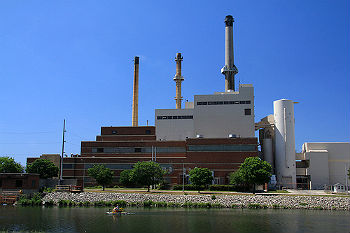 Another small coal-fired power plant in the Midwest may soon face retirement.

The Rochester Public Utilities board is expected to vote today on the future of the city’s 100-megawatt Silver Lake Power Plant.

[UPDATE: The board approved shutting down the plant by 2015]

Based on conversations with utility board members, general manager Larry Koshire said Monday he believes they will vote to decommission the facility by 2015 rather than make costly environmental upgrades.

Silver Lake’s four units were built between 1948 and 1969 on the edge of downtown Rochester, less than a mile from the renowned Mayo Clinic.

The utility installed new emission controls in 2009 as part of a settlement with the Minnesota Pollution Control Agency and Minnesota Center for Environmental Advocacy. Those upgrades, however, are not enough to comply with forthcoming federal regulations.

Kansas City consultants Burns and McDonnell have been studying the impact of upcoming EPA rules on the Silver Lake plant, and they will discuss their findings with the board today.

“We’ve had ongoing meetings with the board on the future of coal and the environmental regulations that are coming down the pipe and the cost impact they would have on continuing operations,” Koshire said.

The utility has a 216-megawatt capacity contract with the Southern Minnesota Municipal Power Authority that covers most of its electricity needs. Its peak load is 292 megawatts, and the Silver Lake plant helps fill that gap during periods of higher demand.

The power plant is a revenue source when it’s dispatched by MISO, the Midwest’s electric grid operator, but dispatch hours have fallen considerably in recent years due to the availability of wind power and the economic downturn.

The consulting firm’s report outlines three possible scenarios for the board to choose from. One involves shutting down the plant by 2015. Another calls for leaving one unit operational and a third describes making the necessary upgrades.

The report notes that because of recent and ongoing transmission upgrades the city would be able to rely on importing power from elsewhere on the grid to meet its future needs.

The plant employs 54 people, who were notified late last week about the possibility of phasing out the facility. For that and other reasons, Koshire said it’s a difficult decision.

“It’s a plant that has served this city for many years now. Prior to our being interconnected with the network it was our sole source of power,” he said.

The RPU board is scheduled to meet at 4 p.m. (CDT) today.