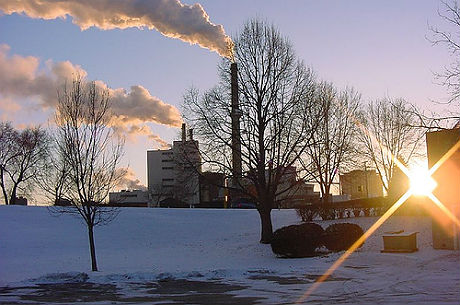 As a kid, Joel Dunnette remembers the flocks of then-endangered Canada geese that arrived each winter at Silver Lake in downtown Rochester.

“It was kind of a special place,” says Dunnette, who is now past-president of the Zumbro Valley Audubon Society.

And it was all because a coal-burning power plant discharged warm wastewater into the lake, keeping it from freezing over in the winter.

Silver Lake has been a wintertime destination for tens of thousands of geese. They were even documented in a 1989 book, The Geese of Silver Lake.

Lately, the lake’s been freezing over again — the result of a greatly diminished and fading role for what was once the city’s sole source of electricity.

The birds will be fine. There’s plenty of other suitable habitat for the now thriving species, Dunnette notes.

But the days are now numbered for the power plant. The Rochester Public Utilities board voted Tuesday to phase out the facility by 2015, further evidence that cheap natural gas and wind power are putting the squeeze on smaller, less-economical coal plants.

The Silver Lake Power Plant’s four units were built between 1948 and 1969 and were once the city’s only power source. In recent years, though, the plant has only been used to supplement a contract that covers nearly three-quarters of the city’s peak load.

The plant employs 54 people, who were notified late last week about the possibility of shutting down the facility.

‘A drag’ on the grid

The municipal utility has sought to sell power from the 100-megawatt Silver Lake plant to the regional electricity grid, but in recent years it’s had an increasingly difficult time competing with natural gas and wind power.

MISO, the Midwest’s electricity grid operator, dispatched the Silver Lake Power Plant’s units only 257 hours in 2011, down from a total of 16,665 hours (for all four units added together) in 2005.

“This is a reflection of the impact the pricing of natural gas, the availability of wind energy and the economic downturn have had on the ability for utilities to dispatch the smaller coal units in to the market,” a consultant’s report to the utility said.

“It just wasn’t economical to run the plant,” said Joshua Low, an organizer representative for the Sierra Club North Star Chapter in Minneapolis. “Wind can almost always underbid coal at any given moment on MISO.”

The utility has been trying to use the plant like a peaking plant, offering to help the grid operator boost electricity supply when demand increases. But coal plants have a big disadvantage for that type of use: they’re slow.

“Coal plants don’t move very quickly,” said Beth Goodpaster, clean energy program director for the Minnesota Center for Environmental Advocacy. It can take hours or days to start them up and turn them off.

“We need agile resources that combine well with renewables, and coal doesn’t really have a place in that system,” Goodpaster said. “They’re just becoming sort of a drag on a modern clean energy grid.”

Rochester Public Utilities installed new pollution controls at the Silver Lake Power Plant in 2009 as part of a settlement agreement with the MCEA and the Minnesota Pollution Control Agency.

New environmental rules aren’t the only thing driving up the price of coal electricity, though, according to J. Drake Hamilton, science policy director of Fresh Energy.

Between 2004 and 2011, the cost of coal delivered to Minnesota increased on average 11.8 percent per year. Nationwide, the increase was 11.4 percent per year on average. Those costs reflect growing competition for resources with China, as well as rising mining costs that come with extracting coal from deeper mines.

“It’s not like you scoop out a nice even ice-cream scoop out of the ground. The geology is much more complicated than that, so as you go deeper … the costs are going up,” Drake Hamilton said.

It’s not determined how Rochester Public Utilities will replace the Silver Lake Power Plant’s generation, but the consultants’ report noted that recent transmission upgrades from the CapX 2020 project will help ensure the city can import electricity from the grid.

The utility has also purchased 40 acres of land on the west side of town that’s adjacent to a natural gas pipeline and electrical substation that could be used for a natural gas power plant, according to the utility’s general manager, Larry Koshire.

The Silver Lake Power Plant is unlikely to be the last small, coal-fired plant to see this fate — perhaps not even the last in Minnesota this week.

(The Sierra Club, MCEA, and Fresh Energy are all members of RE-AMP, which also publishes Midwest Energy News)