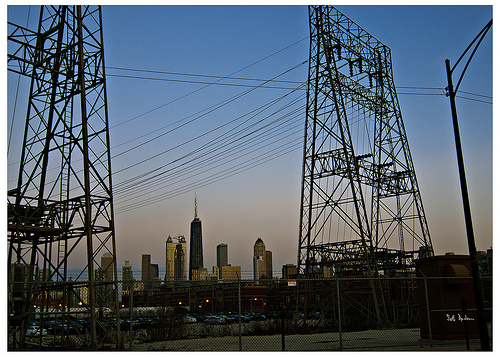 In November, Chicago residents will vote on whether to allow the city to break with utility ComEd and negotiate to buy electricity from alternative retail electric suppliers (or ARES) for residential and small business customers.

The move could save ratepayers money, and many see it as a statement of environmental consciousness and independence – a chance to intentionally buy from smaller suppliers that promise they are providing renewable energy.

But due to a quirk in the state’s Renewable Portfolio Standard (RPS), aggregation in Illinois has little chance of driving new construction of wind or solar power. Unless the RPS is fixed, clean energy advocates and energy policy analysts say, aggregation — especially by a major city like Chicago — could be a serious blow for in-state renewable energy development.

Clean energy advocates on the panel and in the audience stressed that they are not opposed to the concept of aggregation (often referred to as community choice aggregation, or CCA), but in Illinois it is on a “collision course,” in Clean Energy Trust advisor Dave Lundy’s words, with the state’s renewable energy portfolio standard.

Under the Illinois RPS, alternative retail electric suppliers and major utilities – ComEd and Ameren – are committed to purchasing 25 percent of their power from renewable sources by 2025.

The problem with short-term contracts

If Chicago opts for aggregation, it would greatly undercut the role of the Illinois Power Agency, a little-known agency created in 2007 as a result of deregulation. The agency decides from which generation companies utilities like ComEd and Ameren buy power.

With a power market increasingly decentralized through aggregation, neither alternative suppliers nor utilities would want to enter into long-term contracts with power providers, experts say. In fact most contracts would only be for one or two years, according to independent energy consultant Mark Pruitt, who was the first director of the Illinois Power Agency. That’s because utilities and alternative suppliers could see their number of customers fluctuating constantly and would not have the confidence to invest in expensive long-term commitments when their customer base might shrink too much to support those commitments in the future.

After the Chicago round table, Wind on the Wires public policy director Kevin Borgia noted that aggregation will affect all energy generators seeking financing for new projects.

“It’s not just renewables that will have this problem, no one will want to invest in anything long-term,” Borgia said.  “If you want to build a coal plant, what is the bank going to say? They want to know who is going to buy this energy for years to come, not just one or two years.”

In the past year, about 250 Illinois municipalities faced the choice of aggregation, “and most decided to try it,” according to Pruitt. Potential savings to ratepayers are a major reason for the popularity of aggregation, but in Illinois cost savings will become largely irrelevant by June 2013 with the expiration of contracts that ComEd and Ameren had signed with generators when power prices were much higher. Freed from those contracts, ComEd and Ameren can, like the alternative suppliers, purchase cheaper power on the market.

At the roundtable, McNeil said Chicago aggregation would reduce ComEd’s customer base to 10 percent of its current level, though skeptics said they think this prediction is exaggerated. When a municipality adopts aggregation, individual customers can still opt out of the plan and, in Chicago, continue with ComEd. Meanwhile if Chicago opts for aggregation, the alternative suppliers will still pay ComEd a fee for the use of its transmission lines to deliver the energy, and consumers may still even get their bills from ComEd.

A way to fix the RPS

While aggregation raises many complicated issues, clean energy advocates say there is a relatively simple fix for the RPS: making a surcharge that consumers already pay for renewable energy readily available for new in-state projects.

The way things stand now, under aggregation the renewable energy surcharge would essentially be dissipated among different alternative suppliers and a state fund that can be utilized for general budget needs – so it would not fund any new clean energy development.

But various clean energy groups and advocates would like to see the surcharge put into “one bucket” that would be administered by the Illinois Power Agency to procure renewable energy, including through relatively long-term contracts with new in-state renewable energy providers.

Such a reform in the RPS could be achieved through state legislation; bills have been proposed in the past though currently the state legislature is not in session and no bills are on the table.

Some states also try to ensure that their renewable portfolio standards drive in-state development through in-state preferences, mandating that in-state sources must be used to meet a certain percent of the renewable energy requirements. However such requirements run the risk of violating the federal Commerce Clause, so experts say it is unlikely an in-state preference provision would be proposed in Illinois.

Reforming the RPS in the face of municipal aggregation was identified as a top policy priority by clean energy business leaders in an ongoing comprehensive statewide survey by the Clean Energy Trust.

While much attention is given to the quality of different states’ wind or solar resources, and the transmission infrastructure that can get renewable power to consumers, the survey showed that a state’s policy and political climate are just as important to its renewable energy prospects.

“The problem here is risk,” said Barry Matchett, co-legislative director at the Environmental Law and Policy Center. “As long as there’s a high level of risk, financing is expensive…if people look at a place like New Jersey and see they have a higher likelihood of a stable rate of return that will make investors happy, they’re going there.”

Roundtable participant Pete Kadens drove the point home, noting that while his solar company SoCore Energy is based in Chicago, 87 percent of their investment is outside Illinois. He said Illinois’s chaotic energy policy environment made him reluctant to accept IKEA’s request that he install solar on the rooftops of two of their suburban Chicago stores.

The survey identified the five “best” and “worst” attributes of Illinois for clean energy investors. The state’s positive attributes included robust transmission and transportation infrastructure and academic resources. As for the “worst” attributes, respondents pointed the finger at Illinois politics. Stelmasek said it is “no surprise people think not only are political leaders mis-informed or under-informed, but they stand in the way of us moving forward.”

While Illinois is infamous for political corruption, clean energy advocates say the biggest state policy problem facing the clean energy sector is not the result of intentional machinations but rather the unintended and unforeseen ways the RPS and aggregation have played out.

“We have two policy priorities that are both wildly popular,” said Lundy. “The question is, will one kill the other? So let’s focus on the fix.”

(Wind on the Wires and the ELPC are members of RE-AMP, which also publishes Midwest Energy News)