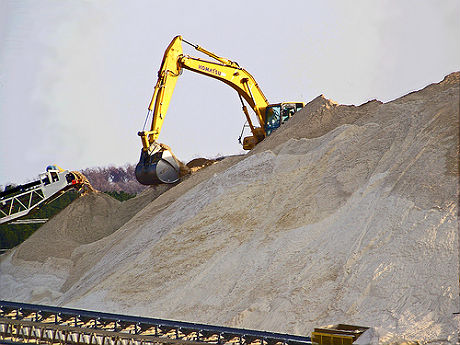 The Superior Sands mine in Bloomer, Wisconsin, in 2011. Silica mines in Wisconsin and Minnesota are rapidly expanding to supply the booming fracking industry. (Photo © Mary Kenosian, used with permission)

A new industry that could bring hundreds of millions worth of investments is on Minnesota’s doorstep, waiting to be invited in.

The frac sand industry is already booming across the border in Wisconsin, where mining operations are expanding to meet the demand for fine silica used in hydraulic fracturing. The scale of that development, often in scenic areas, has also drawn considerable public opposition.

City, county and township officials, too, have unanswered questions about the impact of frac sand mining on the environment, public health, and roads and bridges. Several southeastern Minnesota cities and counties (as well as in Wisconsin) have established moratoriums to give officials some time to try to decide how best to regulate the new industry.

A state senator and a group of citizen petitioners are now calling on Minnesota officials to play a bigger role in helping answer these questions.

“These are going to be big operations. They’re going to be around for a long time. We need to make sure that we have all the bases covered when we move forward with it,” said state Sen. John Howe, a Republican from Red Wing.

Specifically, he and the petitioners are asking the state’s Environmental Quality Board to order something called a generic environmental impact statement for frac sand mining in Minnesota.

The board, which is made up of state commissioners and citizens appointed by the governor, will hear public testimony on Wednesday about whether to order the study. They received a petition on the request last week.

Generic environmental impact statements are a rare and expensive undertaking meant to address larger scientific or cumulative impacts that can’t be covered in environmental reviews for individual projects.

The state has only ever completed two of them, one in 1994 on timber harvesting and another on animal agriculture in 2002. Each cost in the ballpark of $1 million.

Howe doesn’t think local governments necessarily have the resources to explore all of the issues around frac sand mining as carefully as they should be vetted.

Howe said he supports local control, and notes that he voted against a bill last year that would have limited local governments’ ability to set moratoriums on wind farms or other developments. The state-level study wouldn’t prevent cities, counties or townships from making decisions, nor would it exempt companies from preparing project-specific impact statements. The results would supplement the information available to local officials.

“If a county or township feels they have enough information to go forward, that’s fine. They can go forward with it,” Howe said, while cautioning that there is “a lot of information out there” that local officials may not be privy to.

While the Environmental Quality Board has authority to order the studies, it’s up to the legislature to fund them. As of now, Howe doesn’t think there’s support to take up the issue in the upcoming special session, which will focus on flood relief.

Bob Patton, executive director of the Environmental Quality Board, said there may be other steps state agencies could take short of a formal impact study to help local government.

“A GEIS is a big step, and it also takes some time to complete,” Patton said.

No decision is expected at Wednesday’s meeting, which is scheduled for 1 p.m. at the Minnesota Pollution Control Agency.