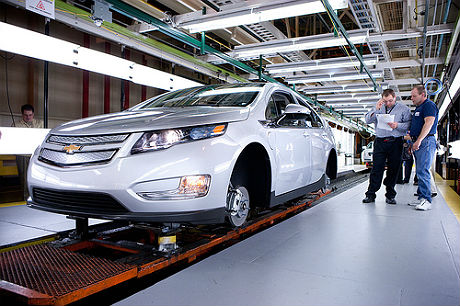 The first pre-production Chevy Volt rolls off the assembly line in 2010. While electric and hybrid vehicles capture much of the attention, most of the Big Three automakers' efforts to improve efficiency and cut emissions are focused on improving internal-combustion engines. (Photo by Argonne National Laboratory via Creative Commons)

In what one executive calls “the depths of 2009,” when Chrysler was in bankruptcy, the company took a look at the market and regulatory forces that awaited it.

And despite a high-profile push by competitors into electric vehicles, the company decided it’s still more cost-effective in the short term to squeeze more life out of the old internal combustion engine.

Ford and GM actually did the same thing. While emissions standards over the next few decades will force electric and, ultimately, fuel cell-powered vehicles onto roadways around the world, automakers are making midterm changes to gas-powered engines that will help them keep up with more-stringent regulations while still meeting consumer demands.

“We actually do believe in electrification,” said Bob Lee, vice president and head of engine and electrified propulsion engineering at Chrysler. “We just believe in using it sparingly and for the right kinds of targeted applications. What we’ve been doing the last two years is developing a technology for commercialization. We’ve been preparing for that shift from where the regulatory push someday will come to the point where customers will start pulling these to the marketplace, and we want to be ready.”

Lee made his comments last week in Traverse City, Michigan, at the Management Briefing Seminars, an annual meeting of automotive executives sponsored by the Ann Arbor-based Center for Automotive Research.

Joseph Bakaj, vice president of powertrain engineering at Ford Motor Co., said the next 10 years will be a time of unprecedented change in automotive energy efficiency, with between 4 percent and 5 percent fuel-economy improvements every year.

The dilemma facing automotive companies, he said, is how to strike a balance between these seven. Ford tries to look at the priorities “through the eyes of the customer,” Bakaj said.

He cited recent surveys showing that while 60 percent would be willing to consider buying an electric vehicle if there were no additional costs compared to one that runs on gas, the number drops to 26 percent if the electric vehicle costs more — even if that extra costs could be recovered in fuel savings over four years.

“So affordability and payback period is quite a significant filter,” he said. “However, 26 percent is still a very significant percentage.”

So, how to deal with these seven technologies, and in which order? At Ford, Bakaj said, it all comes under the slogan “Power of Choice,” which allows a broad range of technologies to be produced on mainstream production facilities. The idea is to remain flexible and build in the ability to change as market and regulatory forces demand it.

For example, he said, the same assembly plant can now build everything from zero-emission battery electric vehicles, hybrids, plug-in hybrids and the company’s EcoBoost gasoline engine. EcoBoost is Ford’s answer to the call for more-efficient internal combustion engines. It combines a lighter engine with direct injection, turbocharging and other power improvements, leading to 20 percent lower fuel consumption, according to Bakaj.

By 2014, he said, Ford expects EcoBoost engines to be available in 20 percent of all its vehicles sold in the United States.

This fall, Ford will also offer its C-Max Energi plug-in hybrid, which will feature a “true EV mode.” That means there will be a button the driver can press to guarantee the vehicle is only running on electric power. That mode offers a top speed of 85 mph and a range of more than 20 miles, with an extended range of 550 miles in blended operation.

And while that kind of performance is an incremental step forward in electric/gas hybrid vehicles, it is far from the kind of distance many drivers expect from gasoline cars.

Smyth emphasized the importance of biofuels as a midterm solution. Currently, he said, GM has about 9 million flex-fuel vehicles around the world, whose engines can run on a combination of gasoline and biofuels such as ethanol.

Compressed natural gas, he said, requires significant investment into infrastructure for the light-duty market. But while it does reduce CO2 emissions, CNG is not renewable so does not solve longer-range problems.

GM, he said, is aggressively developing direct-injection engines, which he said not only improve fuel economy by 3 percent, but more importantly are one of the building blocks involved in getting the “upper potential” out of gas engines.

And, of course, GM was the first U.S. automaker out the door with a plug-in electric hybrid vehicle, the Chevy Volt, which can go 35-40 miles on all-electric power and another 350 miles on gas. Smyth said data coming in from Volt drivers shows that about 70 percent of real-world driving is in all-electric mode.

Next year, GM plans to introduce an electric version of its Chevy Spark minicar. Tiny cars like the Spark, Smyth said, might seem to be a novelty in the United States, but there is a growing global market for them. By 2030, he said, 60 percent of the world’s population will live in cities — mostly in the growing megacities of Asia.

Along the way, the company is working on improving the energy density of battery systems, which he sees doubling by 2020, cutting costs and increasing range for electric cars.

The final stop on the timeline of all the major auto companies? Electric cars powered by on-board hydrogen fuel cells.

Among U.S. automakers, GM has invested the most in this technology. In 2007, GM introduced about 110 prototype fuel cell vehicles around the world. “We have learned a lot from this demonstration fleet,” Smyth said, adding that the company is now ready to take it through the “cycles of learning” necessary to bring it to market.

A large part of the equation for fuel cells is developing an infrastructure to handle refueling. GM is using the Hawaiian island of Oahu for its pilot program. The island will be “hydrogen-capable” by 2015, Smyth said.

But there are many steps and choices along the way from today’s gasoline and electric fleet to tomorrow’s fuel cell cars. And many paths to get there. Lee, at Chrysler, compares its strategy to buying a new heating or air conditioning system for your home. First, fix the leaks in your vents, close your windows and insulate your house before you buy a new unit.

So, Chrysler is upgrading its transmissions, building the most-efficient engine they can. Diving into a battery-electric vehicle, where there might be regulatory pushes but not much market pull, would be unwise if there is no return on the investment. You can’t work on new technology, he says, without first seeing some profit from the old.

Howard Lovy is a Traverse City, Michigan-based freelance writer who specializes in technology and innovation.