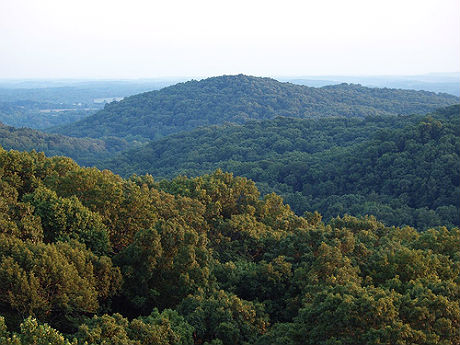 Part of the New Albany Shale lies beneath the Shawnee National Forest in southern Illinois. (Photo by Christina Rutz via Creative Commons)

Annette McMichael, the owner of a “green” advertising company in central Illinois, has been following the national fracking debate with great interest for some years.

But she never imagined it would affect her personally – until getting a letter from a company asking to lease the lovely wooded property where she plans to retire in several years.

McMichael’s retirement property in Johnson County, Illinois, within the boundaries of the Shawnee National Forest, is among hundreds of thousands of acres targeted by energy companies looking to tap the Albany Shale for oil and natural gas that potentially could be extracted through hydraulic fracturing.

The president of Western Land Services, a Michigan-based company that acquires titles and land rights for energy companies, said that in less than a year they have signed about 1,000 leases covering several hundred thousand acres in southern Illinois for energy companies interested in fracking.

Wayne Woolsey, founder and owner of the Wichita-based Woolsey Energy Corporation, said the New Albany could be similar to the Bakken oil shale in North Dakota or shale plays in Kansas that have yielded tens of thousands of dollars in royalties for local residents. There is still no certainty widespread fracking will actually occur in Illinois; companies buy up or lease mineral rights before starting exploration, and depending on what they find and how the market develops, they may or may not decide to do commercial drilling.

“It certainly hasn’t been proven yet, we don’t know if it’s going to be there,” said Woolsey. “But if it is, it will be a great opportunity for the state. Look at the Bakken, where they have all this money now for schools, roads.”

Many see leasing their land as a welcome extra source of revenue, especially as the summer’s record drought has hit many farmers hard.

But others fear southern Illinois could suffer the same problems and concerns making headlines in other parts of the country where fracking has taken off: rural areas turned into industrial zones, the threat of pollution, massive water use in a region where many fruit and vegetable farmers depend on irrigation, huge amounts of contaminated waste water needing to be stored, and financial liabilities if things go wrong.

A group called Southern Illinoisans Against Fracturing Our Environment (SAFE) has  launched a website warning of the risks of fracking and advising landowners not to sign leases. The group held a protest in downtown Chicago July 30 asking Governor Pat Quinn to back a two-year moratorium on hydraulic fracturing to give state legislators and regulators time to examine the issue and develop comprehensive regulations.

Critics say there is currently almost no state legislation that covers fracking, and the oil and gas industries are exempt from various provisions of federal law including protections in the Safe Drinking Water Act and Clean Water Act that apply to other industries.

Woolsey and Wilson said they consider existing state and federal laws adequate, and said they oppose a moratorium. “After a few wells are drilled if additional protections are needed they can always be instituted,” said Wilson. Woolsey said the only environmental concern comes from the need to dispose of salty brine. He said the company never drills within 200 feet of a structure and monitors all nearby wells.

In order to start drilling exploratory wells, Woolsey said, an energy company needs to compile enough mineral rights to make large-scale drilling profitable. He said that in a matter of months, the price to lease an acre of southern Illinois mineral rights has skyrocketed from about $25 to as much as $500, a one-time payment to landowners who will also get royalties if oil or gas from their land is ultimately sold.

Landowners say they’ve been approached by a handful of different energy companies looking to lease mineral rights. Along with Woolsey, the Denver-based company Next Energy LLC, which didn’t respond to a request for comment, has also reportedly signed  leases with many Illinois landowners.

Woolsey said the company’s leases are typically similar, though they may be tweaked to respond to a given landowner’s concerns. A Woolsey lease reviewed by Midwest Energy News – with personal information redacted – shows that the company reserves:

…the exclusive right of injecting water, brine and other fluids and substances into the subsurface strata, and for constructing roads, laying pipelines, building tanks, storing oil, building power stations, electrical lines, power poles and other structures thereon necessary or convenient for the economical operation of said land…

The lease also gives the company rights to drill wells on the land for an unlimited amount of fresh water, and to dispose of brine and waste water on the land.

The leases are for an initial four-year-term, and the company can renew them for four years of further exploration. If oil or gas is being extracted and sold on the market, the lease extends indefinitely. McMichael found this provision particularly disturbing, since a landowner could not get out of a lease if they changed their mind or had bad experiences with the industry.

“The only way it is forever is if it is actually producing at a commercial scale,” said Woolsey. “Then we need to be able to finish it; this is a contract and it’s a big investment.”

The Woolsey lease promises 15 percent royalties on oil or gas actually sold at market, and smaller “shut-in” royalties based on the size of the mineral rights while gas is held in storage. McMichael thinks this provision also means landowners will get much smaller royalties than expected — of course many never get royalties at all.

Woolsey said that on some leases in Kansas landowners get thousands of dollars a day in royalties. In addition to royalties, he added, the industry pays into the area’s tax base.

Though concern about and opposition to fracking in Southern Illinois has been growing in the past year, SAFE legal coordinator Chuck Paprocki, a retired farmer, said most area residents don’t understand the issue or the leases they’re being asked to sign.

The Illinois Farm Bureau has facilitated an online dialogue about fracking and leasing, without taking an official position on the matter, and created a checklist for landowners to make sure they understand what they are getting into. On Aug. 1 the farm bureau and the University of Illinois Extension hosted informational meetings for area residents.

“They’re not experienced with things like this, they’re not used to dealing with lawyers,” said Paprocki of many Illinois farmers. “Someone comes in waving a paper in front of their face and telling them they’re going to get rich, there will be an initial bonus and they can buy a new pickup truck. But they’re assuming all the responsibility – so any damage to their own farm is their responsibility, any damage to their neighbors’ farm is their responsibility. They’re getting screwed, basically.”

Woolsey, Wilson and other industry proponents point out that hydraulic fracturing for oil and gas has been going on for decades in Illinois, as in other parts of the country. But relatively new methods of horizontal hydraulic fracturing have made it possible and profitable to tap oil and gas in shales, “tight sands” and other “unconventional deposits” that couldn’t be accessed before. Hence industry critics say that in states including Colorado, Wyoming, Pennsylvania and Ohio – and potentially Illinois – the scale and potential for problems from the modern fracking boom is nothing like the past.

McMichael said that after years running her own business and raising four children with 11 grandchildren, “hardly anything keeps me up at night.” But the prospect of fracking in and around the high timber and prairie land where she had hoped to spend her golden years has become a source of constant stress.

“I’m very laid back, and nothing worries me except this,” she said. “If they decide to frack there, maybe I’ll have to retire somewhere else. But if they frack there our property will be worthless, we won’t be able to sell it, and we really don’t want to be anywhere else.”