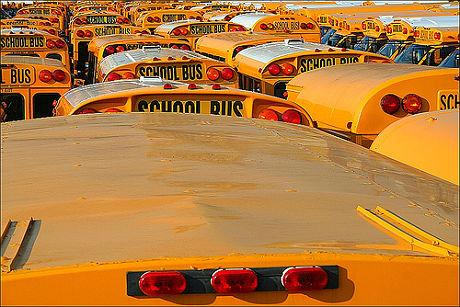 Fuel economy is hardly the most popular subject among teenagers, but it’s a passion for 17-year-old Jonny Cohen, who’s found a way to save schools money and reduce greenhouse gas emissions by increasing school bus fuel efficiency.

The idea popped into his head on a walk home from school when he was 12. The then-seventh-grader was taking summer classes on aerodynamics at Northwestern University, and it dawned on him there must be a way to streamline the bulky, boxy shape of school buses.

“I like to see things that are efficient. Things that are inefficient use more energy and are polluting,” said Jonny, who lives in Highland Park, Illinois. “I also understood that reducing carbon emissions from a school bus could reduce global warming.”

With the help of friends and his sister Azza Cohen, a more formal effort took shape in 2008. They called it the Greenshields Project.

Azza, 19, said Jonny has always been an inventor. He blew things up, made his own intercom system and crafted a device to put cheese on a hamburger. But when Jonny ran into her room saying he could revolutionize school buses, Azza didn’t think much of it at first.

“He’d had a lot of crazy ideas before, and I’d never really believed them,” she said. “You’re less inclined to believe a 12-year-old when they say they have a solution to a really pressing problem.”

School bus emissions are a pressing issue. According to U.S. EPA, diesel exhaust from school buses contains pollutants that contribute to ozone formation, acid rain and global climate change. In addition, the fine particulate matter from diesel engines can cause lung damage, especially in children, and contributes to haze.

EPA created a national idling reduction campaign to cut down on air pollution from buses. But, to date, no product or program exists that would reduce emissions quite like the GreenShield.

Putting a fuel hog on a diet

An idea to put a sloping windscreen on the front of the bus evolved into an aerodynamic feature on top, after wind tunnel testing. (Photo courtesy of the GreenShields Project)

Jonny’s original idea was to attach a streamlined, transparent Plexiglas cover over a school bus windshield to reduce drag and allow the vehicle to use less fuel.

The fourth-generation GreenShield, produced with help from Northwestern University’s Segal Design Institute, looks radically different. Instead of a shield, it’s more like a ski-jump-shaped hat installed on the roof of a bus, which reduces material and installation costs. Research shows the efficiency benefits are about the same.

John Benish Jr., president of family-owned Cook-Illinois, said joining with GreenShields was a “perfect fit” for the company, which already runs most of its school buses on biodiesel.

“We’re always looking for that next thing to make school buses a little greener, a little better and more efficient,” he said.

Buses are the safest way to get children to school, but they’re also fuel hogs that get only 4 to 6 miles per gallon. Studies show that one bus takes an average of 36 cars off the road, but GreenShields calculated that school buses in the United States still spew 9 million metric tons of carbon dioxide into the atmosphere each year.

With schools spending about $6,500 on diesel fuel per school bus per year, and about 480,000 school buses in operation across the country, the group calculated that busing students to their classes costs more than $3 billion per year. An installed GreenShield could save $600 in annual gas expenses per bus.

“If they use a GreenShield, school bus companies can charge less for their services, and so less money will have to be spent on school buses, which is less money spent on gas and hopefully more on education,” Jonny said.

Benish said if his company can run a bus for less than what a school is currently paying, “we pass on savings to them.”

Pepsi gives it some fizz

The GreenShields Project really took off in 2010 when the team won a $25,000 award through the Pepsi Refresh Project. Last month, the GreenShields team picked up more support with the $5,000 audience choice award from the Ashoka Youth Venture and Consumer Bankers Association Foundation’s “Banking on Youth” program.

GreenShields has also been featured on “Good Morning America,” the White House blog and an MTV commercial. Last year, Jonny was named one of Forbes magazine’s top 30 under 30 in the energy division.

But after nearly five years of testing and waves of publicity, making the idea a reality still has its challenges.

“The way we keep it going is by sending our name out there, we keep pitching to the media, keep emailing our senators and calling the EPA,” she said. “Basically, you never can stop, because if we stop then nobody will listen to us.”

Government approval from EPA or the Department of Transportation, but preferably both, is the biggest remaining barrier to getting GreenShields on everyday buses. The patent pending on the GreenShield expires in February, and the group is hoping to see some legislative action before then.

Once the product is approved, Benish said he’s committed to testing it and rolling it out across his fleet if the fuel savings prove accurate. A handmade GreenShield will cost him $200, but if 1,000 or more units are ordered, plastics manufacturers will make a mold and the price will drop to $30. Cook-Illinois runs 2,300 school buses daily.

Jonny returned to Illinois last week after completing an intensive summer program at Texas Tech University, where he worked on making cleaner transportation fuels. Eventually, he wants to be a mechanical engineer and use that knowledge to build a business. But for now, he and Azza are revving up GreenShields.

“It’s never really over until all school buses become super-efficient,” Jonny said. “So I think until then, there’s always work to be done.”

But the driving force behind GreenShields is also greater than making a product for school buses.

“It’s also about inspiring other kids so that they can make change, because you can’t have change if you keep thinking other people are going to do it,” Jonny said. “I’m inspired to be a change-maker so that hopefully more people can be change-makers, too, so that we can have a better world.”