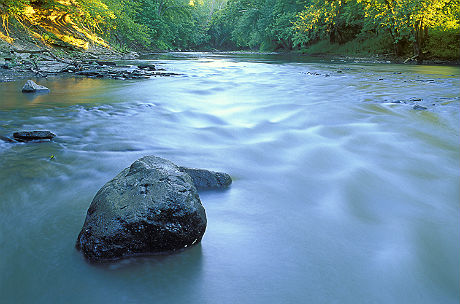 Neighbors of a proposed coal mine in eastern Illinois are concerned the project would draw down the Salt Fork of the Vermilion River, which is treasured by locals for its recreational opportunities. (Photo ©Jason Lindsey)

In June of 2010, a local farmer invited Traci Barkley, to an unusual meeting called by the Vermilion County, Illinois, Farm Bureau.

Instead it focused on fuel of a different kind, recalls Barkley, a water resources scientist at Prairie Rivers Network, a Champaign, Illinois-based environmental group. The message at the meeting, Barkley recalls, was that “the coal company was coming.”

Unbeknownst to the public and even many of those present, Barkley said, Sunrise Coal of Carlisle, Indiana, had begun quietly going door to door to farm owners, making deals to buy rights to mine a rich seam of coal located below their corn and soybean fields. So the Farm Bureau brought in its lawyers to help members negotiate better mineral-rights leases with the coal company.

The organizer’s presentation on selling mineral rights, according to Barkley, was that “of course this is a good thing and let us help you with this.”

Now, more than three years later, Sunrise Coal has leased mineral rights to 19,500 acres near Allerton, Illinois, in the east-central part of the state. In June they applied to the Illinois Department of Natural Resources to extract coal from what they’re calling the Bulldog Mine.

The area’s rich virgin coal seams offer an attractive, low-cost option to coal mining companies aiming to sell both domestically and abroad. But a growing number of local residents are wondering whether a new coal mine in their community is a good idea at all—and what they can do at this late date to stop it.

Vermilion County sits near the center of the Illinois Basin, a coal-rich region that encompasses most of Illinois, southwestern Indiana, and western Kentucky. The county has been mined for coal for years, but rich virgin coal seams still abound, said John Hanou, an Annapolis, Maryland-based energy consultant specializing in the coal industry.

In part that’s because demand fell for high-sulfur Illinois Basin coal fell since the 1970s after federal pollution rules to fight acid rain clamped down on sulfur dioxide emissions. But while scrubbers of 30 years ago may have removed only 80 percent of the sulfur dioxide, today’s scrubbers remove more than 95 percent, enough to make burning high-sulfur coal viable even under today’s regulations.

What’s more, it simply costs less to mine coal in the Illinois Basin than in Appalachia. “At minimum, it’s $20-$30 per ton cheaper than in Appalachia,” Hanou said. And there’s still a robust domestic market for coal and a burgeoning export market to China and India, added Hanou, who last year published an extensive, proprietary report on Illinois Basin coal.

Sunrise Coal itself said they can’t say where they’d be selling coal from the Bulldog Mine since they have no contracts yet, but “we are best situated geographically to sell in the Midwestern region,” spokeswoman Suzanne Jaworowski said. The Vermilion County area is also served by the Norfolk Southern Railroad, which directly supplies coal to coal-burning power plants in the Southeast, Hanou said.

While business possibilities may abound for Sunrise, local residents are divided over the Bulldog Mine, and a determined band of them have teamed up with Prairie Rivers to slow or stop it. The Prairie Rivers Network is a member of RE-AMP, which also publishes Midwest Energy News.

If Sunrise does build the Bulldog Mine, the company will supply 300 jobs at an average pay rate of $23-$25 per hour, Jaworowski said. But mine opponents question how many of the new hires would be local people as opposed to trained mine workers from other areas.

Much of the opposition to the mine in the region comes down to water, Barkley said.

Sunrise says they’ll need between 340,000 and 540,000 gallons of water a day for the first few years of operation, and opponents say that number could climb to 750,000 gallons a day once the mine gets going. These totals dwarf the amount used by entire villages in the region. The nearby village of Oakwood, Illinois, population 1,594, for example, uses 130,000 gallons a day, village president Bob Jennings said.

When asked where the mine’s water will come from, Jaworowski said initially, “a collection pond.” When a reporter pointed out that rainwater was unlikely to supply the hundreds of thousands of gallons needed, she said that the company is looking to the village of Homer, Illinois, which borders the mine, for additional water.

Last week the Homer Village Board  voted to do a feasibility study, with the Illinois State Water Survey, on whether it was practical for the village to pump and sell all the water the mine would need. And they also voted to investigate whether it was even legal to do so.

If the water comes from the river, Jennings worries that Sunrise may draw its water from the river as well, making it harder to supply his village with clean drinking water. “We want to find out what the source of their water is. I haven’t gotten what I consider a straight answer on that,” Jennings said.

If the mine’s water doesn’t come from the river, it will come instead from groundwater, which is also scarce in the area, Barkley and other mine opponents say. Many rural residents get water from wells, but finding groundwater to extract is tough. For example, when Homer, Illinois, farmer Jim Smith asked a well-drilling company to come to his farm and drill a new well, they told him it wasn’t even worth their effort, he said.

The Salt Fork of the Vermilion River is also treasured by local residents for its canoeing and fishing, and by conservationists for the endangered mussels and fish it shelters. Coal mining waste could endanger all of that, Barkley said.

Treated wastewater from the mine would be put back into the river upstream of Oakwood, and that concerns Jennings. “Our concerns are that we have to drink it. If something additional is put into that river, we have to clean it out,” he said.

There’s no need to worry, Jaworowski said in an email. The company’s discharge will abide by all federal and state water pollution regulations. But Barkley said that many Illinois coal mines in fact don’t and regulators do little to stop them.

Opponents also object to Sunrise’s secrecy, how they’ve tried to suppress public discussion of the proposed mine. According to an email obtained by Prairie Rivers Network and supplied to Midwest Energy News, Sunrise representative Jaworowski emailed David Lucas, the mayor of Homer, in April 2012.

…If you receive any inquiry from the press, please direct them to me. It’s important that we not discuss any aspect of the project in public before our permit is secure. I’m sure you understand the challenges it can bring up.

I’ll call you later and we can discuss a plan for dealing with the press.

In a June 5 press release, Prairie Rivers Network called the email “Sunrise Coal’s Latest Deception.” However, Jaworowski said it was taken out of context, and that she meant only that the project as in the evaluation stage, and that “we shouldn’t make any public announcements until we have an idea what in reality is feasible.”

Some residents worry that a coal mine in their community will disrupt a long history of farming in the area, where many farms have been held in the same family for more than a century.

Local farmers themselves worry that mined land will subside, causing expensive disruptions to drainage tile, the elaborate system of subsurface pipe that for more than a century has allowed the flat, wet ground to be farmed. On Smith’s farm, the land slopes only one inch every 100 feet. “Subsidence would stop the drainage,” and it would cost $400-$500 per acre to fix, Smith said. And those costs could add up quickly, Smith added.

Sunrise Coal argues that the land won’t subside because the mine will be of the room-and-pillar type, in which miners use beams to support the earth and leave them behind when mining ends to prevent collapse. And Hanou, the energy consultant, agrees with Sunrise that the farmers’ concerns are misplaced.

But Smith, 85, who’s been farming the area for more than 60 years, disagrees. “They say it won’t subside, but that’s baloney. You can’t take out so much 300 feet down without something happening. And if it happens in 50 years, they won’t be here.”