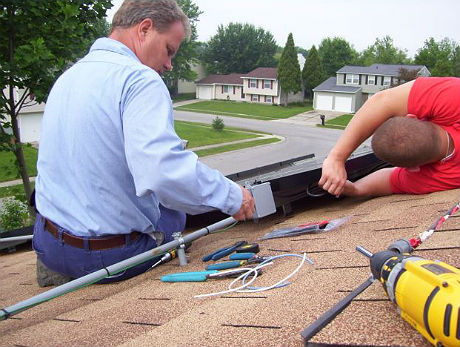 Workers install solar panels on the roof of an Indianapolis home in 2009. Indianapolis Power & Light may soon have more solar power installed in its service area than any other utility in the Midwest. (Photo courtesy EcoSource, Inc., used with permission)

Last month, Indianapolis Power & Light (IPL), an investor-owned utility that provides electricity to 470,000 customers in central Indiana, put out a press release boasting about its support of 30 MW of new solar developments.

The utility’s claims were repeated in glowing news reports around central Indiana.

But what the company did not say was that the 30 MW of new solar was all that remained of an innovative feed-in tariff project that would have incorporated up to 100 MW of renewable energy into their generating mix, and is now ending—over the protests of both renewable energy developers and environmentalists.

“They did a 180-degree turn on the program,” said Laura Arnold, the president of the Indiana Distributed Energy Alliance.

“It’s really disappointing,” said Jesse Kharbanda, executive director of the Hoosier Environmental Council, an Indianapolis-based environmental group. “Just three years ago, IPL was part of a broad coalition of utilities that were rightly calling public attention to climate change and the need for a comprehensive national policy,” he added. “Now IPL is withdrawing one of its only existing policies to begin the long process of cutting carbon.”

IPL did not respond to several phone calls and emails requesting comment.

Unlike many other states, Indiana does not require utilities to incorporate increasing amounts of renewable energy into their generating mix via a renewable portfolio standard, although it did institute modest voluntary goals in 2011 that aim for 10 percent renewable energy in the state by 2025. The state also has no law mandating a renewable feed-in tariff—a policy that requires utilities to provide customers that provide electricity to the grid from solar, wind or biomass a long-term rate high enough to justify their initial investment.

Under the program, as originally proposed, solar, wind and biomass developers would apply to IPL to participate, and the winning companies would build projects providing up to 100 MW of power—about 1 percent of IPL’s annual sales. In exchange, IPL would contract with the companies to pay them between 7 cents and 14 cents per kilowatt-hour for wind and between 20 cents and 24 cents per kilowatt-hour for solar over a 10-year period. (IPL’s current contract terms guarantee a fixed rate for 15 years rather than ten.) IPL would charge slightly higher rates to its customers to cover the cost difference.

The policy worked: Within a year, solar and wind developers applied to build 170 MW of projects, Arnold said.

Then IPL pulled the plug.

In a June 28 letter to the chair of the IURC explaining the company’s reasoning, William Henley, IPL’s vice president of corporate affairs, first lauded the pilot program, saying that it “had generated benefits for both customers and the Company.”

Customers, Henley wrote, would be paid for 15 years at rates high enough to cover costs and generate a “reasonable return on their investments.” IPL and its customers would benefit by “sourcing renewable energy from within IPL’s service territory at a set cost for 15 years to hedge against the potentially higher cost to comply with future renewable energy purchase mandates and to help keep the investments local.”

If it was so successful, then why did IPL terminate the program? In his letter to IURC chairman James Atterholt, Henley listed several reasons.

With 300 MW of utility-scale wind farms under contract and several MW of solar, IPL had enough renewable energy in its generation portfolio to promote clean energy and hedge against future renewable energy purchase mandates, he wrote. But today’s higher costs of renewable energy, as compared to “traditional forms of generation” such as coal, “must be balanced against other expected cost increases such as those necessary to comply with Environmental Protection Agency mandates,” Henley wrote.

And he said that “Rate REP has not generated the interest among customers that IPL originally expected.”

By 2011, a year after the pilot program was launched, the company had 170 MW of proposed projects, more than the program could accommodate. Then IPL moved to end it.

“We believe they withdrew the program because the program would have been quite successful,” said Kerwin Olson, executive director of the Citizens Action Coalition, an Indianapolis-based ratepayer advocacy organization. “Utilities have fought solar PV for decades, especially rooftop PV. You’re generating your own power. It’s competition and loss of business,” Olson explained.

At the time of IPL’s announcement in late June, IPL had contracts for 2 MW in solar projects, and in their July 19 press release, they announced that Sunrise Energy Ventures, had won a reverse auction to supply 30 MW of solar energy to IPL’s mix. (In the reverse auction, the contractors proposed a price at which to sell electricity, and IPL chose the lowest bidder.

Dean Leischow, managing director of Sunrise, told Midwest Energy News the company plans to build three 10 MW, 70-acre solar farms in fields on the outskirts of Indianapolis. IPL has agreed to pay the company a fixed rate for 15 years.

As a result, IPL could lead all Midwest utilities in the amount of solar power generated in their service territory, according to Solar Electric Power Association’s 2011 utility solar rankings, IPL maintained in its press release.

That sounds about right, said Leischow, of Sunrise Energy Ventures.

“IPL’s interest in solar energy is part of our commitment to a more diversified portfolio of power generation that includes appropriate renewable sources that allow us to provide safe, reliable energy at some of the most affordable residential prices in the nation,” Zabzebski said, according to the company’s July 19 press release.

But Olson had a very different take on the situation. “There’s lots of greenwashing going on,” he said.