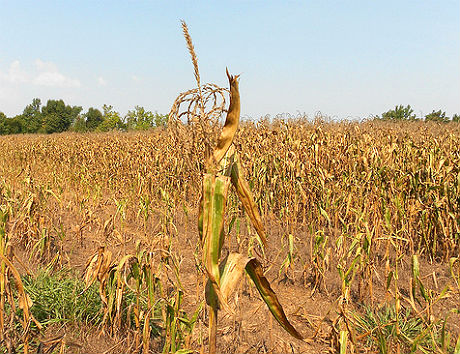 After receiving letters from poultry and livestock producers as well as six governors, the U.S. Environmental Protection Agency has formally opened the debate on whether it should relax the federal ethanol mandate. The meat industry and its political supporters want the EPA to issue a temporary waiver on the Renewable Fuels Standard so more of the drought-withered corn harvest can be used for animal feed.

We asked an ethanol producer, a turkey farmer and a biosystems professor to weigh in on the issue:

Randy Doyal is CEO of Al-Corn Clean Fuel, a farmer-owned cooperative in Claremont, Minnesota. Its ethanol plant produces up to 50 million gallons of corn-based fuel each year.

“We’re being affected like everybody else who depends on corn as a commodity,” says Doyal. “It’s no fun if you’re the one buying the corn.”

The drought has driven up costs for everyone from ethanol and livestock producers to grain exporters, he says. That doesn’t mean the EPA should intervene.

“How does EPA fix a drought? They don’t,” says Doyal.

The impact of a temporary waiver on prices would “relatively insignificant” at best, he predicts. That’s because there would be demand for ethanol even without a federal mandate, he says.

Gasoline refiners and blenders depend on ethanol to boost octane and increase volume. Overall, ethanol accounts for about 10 percent of the fuel we put into our vehicles. That’s not going to change overnight, and probably not much either over the course of a short-term, temporary waiver.

“The market is telling us still to sell ethanol,” says Doyal.

Another reason he thinks the EPA shouldn’t take action is that ethanol production could be lowered without a waiver. Fuel producers could replace some ethanol use by instead purchasing some of the approximately 3 billion gallons worth of unclaimed renewable fuel credits that are currently on the market. The credits represent fuel that’s been produced but not counted yet toward anybody’s compliance with the federal standard.

John Burkel is a fourth-generation turkey farmer in northwestern Minnesota. His operation in Baxter, about 20 miles from the Canadian border, goes through about 100,000 bushels of corn each year.

Corn typically accounts for more than a third of Burkel’s costs, and it’s on track to far exceed that next year, he says. At the beginning of the season, Burkel was paying about $5.50 per bushel for corn. Today, the same amount goes for about $8.

Fortunately he’s already purchased much of the corn he’ll use this year, but he’s bracing for next year, when he may have to ask his lender for an extra quarter-million dollars to cover higher feed costs. Burkel says he thinks this year’s drought and high corn prices warrant a waiver from the EPA.

“I think the rational response to a drought of this magnitude is to put in a partial waiver, just for this year,” he says. “You could easily free up a billion bushels of corn.”

Nationally, the poultry and livestock industries annually use more than 4 billion bushels of corn. So if a waiver resulted in just a 25-cents per bushel price drop, it would equal a billion dollars in savings for farmers and their customers, he says.

A rule of thumb is that a 30-cent increase in corn prices roughly translates to a penny a pound increase in turkey prices. So the jump from $5 to $8 corn could mean an extra dime per pound for next year’s Thanksgiving turkey.

Congress put the waiver option in the legislation for times when the standard would cause severe economic hardship. That time is here, says Burkel.

Jason Hill studies the economic and environmental impacts of biofuels at the University of Minnesota’s Institute on the Environment. The assistant professor of bioproducts and biosystems engineering says corn ethanol has a relatively trivial impact on gasoline prices and a fairly large impact on food prices. Also, studies are finding the environmental benefits to be marginal at best, and more likely negative.

“Knowing all that, it’d be a good time for [the EPA] to reconsider what benefits we’re really getting from corn ethanol,” says Hill.

Hill was part of a committee that authored a 2011 National Academy of Sciences report on the economic and environmental effects of the Renewable Fuel Standard. It concluded that ethanol production has contributed upward pressure on agricultural commodities, food and livestock feed, however it’s just one of many factors — including a growing global population, crop failures, market speculators, and the declining value of the U.S. dollar.

A waiver would certainly have an effect of food prices, says Hill, thought it’s difficult to say how much because prices are based in part on psychological factors beyond the scope of supply and demand numbers. Some states also have ethanol blending mandates that wouldn’t be affected by a federal waiver.

Ultimately, he believes the EPA waiver decision will be a political one more than anything else.

“It’s an election year,” says Hill, “and no doubt the administration is aware of the importance of Midwest swing states.”