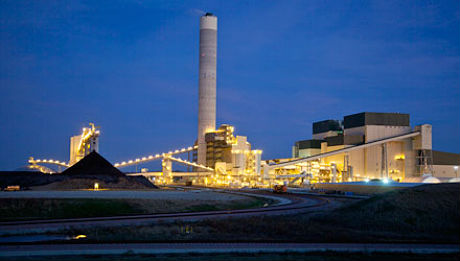 Power costs from a controversial Illinois coal plant are soaring, creating a major financial burden for towns and utilities that invested in the project, according to a new report.

Electricity from the Prairie State Energy Campus now costs between 40 and 100 percent more than Peabody Energy originally promised, raising electric bills for 2.5 million ratepayers and costing hundreds of Midwestern towns millions of dollars apiece, according to a detailed financial analysis [PDF] released Wednesday by the Institute for Energy Economics and Financial Analysis, a small organization that works to reduce the nation’s dependence on coal and other non-renewable energy resources.

“What today’s report shows is that the Prairie State coal plant is turning out to be the financial nightmare that many of us feared when it was first proposed,” said Sandy Buchanan, executive director of Ohio Citizen Action, a ratepayer- and environmental-advocacy group.

Meg Gallagher, a spokeswoman for Peabody Energy, said in an email that Peabody hadn’t yet fully examined the report, but she touted the plant’s efficient design and emission control equipment that cuts air pollution to one-fifth the existing fleet of coal-fired power plants and 40 percent less carbon dioxide emissions than the oldest coal plants.

“I can tell you that the fundamentals that have always made Prairie State the right choice – reliable, affordable power that creates jobs and builds economies – are the reasons the project is the right choice for consumers today and over the long term,” Gallagher said.

The 1,600 MW Prairie State coal plant was planned and developed by Peabody, the world’s largest coal company, beginning in 2001. Peabody designed the plant, secured permits for it, and lined up a contractor, Bechtel, to build it in Marissa, Illinois, about 50 miles southeast of St. Louis. The company also began working aggressively with state power agencies to help persuade communities all over the Midwest to buy a stake in the project, promising them a stable source of low-cost electricity.

In all, 217 towns and cities and 17 electric co-ops in eight states signed decades-long contracts to buy electricity from Prairie State. All risked losing money if power from the plant became more expensive than wholesale market prices.

In addition, 82 of those communities signed take-or-pay contracts where they agreed to pay a proportion of the plant’s fixed costs, regardless of whether it is generating power. That happened between March and June of this year, when communities across the Midwest were paying for power they hadn’t received.

Peabody Energy and municipal power agencies made three promises to communities to convince them to agree to long-term contracts to purchase power from Prairie State at a fixed rate, said report coauthor Tom Sanzillo, director of finance for the Institute of Energy, Economics and Finance.

“None of those promises have been kept,” Sanzillo said.

Second, communities were promised that by owning the plant, they would be able to collectively control its costs, yielding them low-cost power for decades. However, the cost of wholesale power from Prairie State will exceed projected market costs of power for the next decade.

Third, communities were promised that they could sell the power from Prairie State on the open market at a profit. However, since the communities are locked into paying more for electricity than the current market prices, those that signed contracts to buy excess electricity in the hopes of turning a profit will end up selling it at a loss.

“Our analysis shows that the project will lose money for each participating community at least until 2025,” Sanzillo said.

‘A big issue for our community’

To come to their conclusions, Sanzillo and his colleagues started with current wholesale prices on markets run by the two organizations that run the grid in the region, PJM Interconnection and the Midwest Independent Transmission System Operator (MISO). They relied on projections from proprietary professional services, and they reviewed financial projections in bond documents, Sanzillo said.

The deal with Prairie State “was supposed to be a hedge against higher [electricity] costs, not the cause of higher costs,” Sanzillo said.

One community in harm’s way is Galion, Ohio, a town of 11,000 in the north-central part of the state that is in for a 10 MW share of the project, or about 66 percent of the town’s projected average electricity demand in 2015. Because the electricity from Prairie State will continue to cost more than the market rate for wholesale power, Galion is on the hook for $8 million it would not otherwise have paid between now and 2025, according to the report.

“This is a big issue for our community,” said Roberta Wade, a Galion councilwoman.

“In hindsight it’s clear that municipal utilities should not be involved in risky energy speculation,” Wade added. “It’s just not appropriate to gamble with the public’s money.”

Communities that bought a piece of Prairie State could pay even more than the report currently projects, Sanzillo said. Construction costs have more than doubled since Peabody Energy proposed the project in 2000, from $1.8 billion to $4.5 billion.

“That is the single biggest factor driving these cost increases,” and costs could rise further, Sanzillo said.

Moreover, a mine owned by a Peabody subsidiary, the Lively Grove mine, was supposed to deliver a 30-year supply of coal, but federal mine and safety officials said there was only a 22-year supply. And a coal ash landfill was said to have space for 22 years of coal ash, but instead it had room for only 12. Prairie State is seeking to build a second coal-ash landfill on the site of the plant.

Such costs have caused most coal-fired power plants on the drawing boards to be canceled in recent years, Sanzillo said.

“This one was completed, and now we see the outcome.”