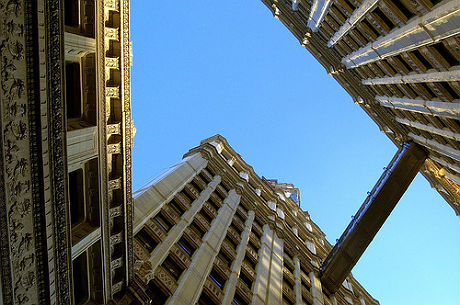 The Wrigley Building is among 14 commercial buildings and 100 municipal buildings targeted for energy efficiency upgrades under the Retrofit Chicago program. (Photo by Lis Rock via Creative Commons)

Chicago Mayor Rahm Emanuel is known for letting hardly a week go by without the announcement of a major new initiative.

One of the most prominent and more controversial plans has been his $1.7 billion Infrastructure Trust, a sweeping plan for financing public infrastructure improvements through private investment.

The idea raised concerns among many residents in part because of a disastrous public-private trust deal that capped former Mayor Richard M. Daley’s tenure – the $1.15 billion leasing of the city’s parking meters to a private investment firm for 75 years. It was later revealed to be a bad financial deal for the city that also resulted in higher rates, more tickets and many headaches for Chicago drivers.

The inaugural component of the Infrastructure Trust is Retrofit Chicago, wherein private investment is slated to fund $225 million worth of energy efficiency upgrades in about 100 municipal buildings.

Investors will be paid back through the savings in city energy bills over the course of about 15 years. If savings aren’t realized as expected, the private investors will take the loss. If energy savings accumulate beyond the initial investment, investors could turn a profit.

The overhauls — including new lighting systems, smarter climate control practices and window replacement — are supposed to create about 1,000 jobs and save $20 million a year in energy bills.

During City Council hearings in the spring, Retrofit Chicago was essentially billed as a make-or-break test for the Infrastructure Trust. The Chicago Sun Times quoted city Chief Financial Officer Lois Scott telling city councilmen who were demanding more details about the whole initiative:

“We are focused on Retrofit Chicago. … We need to take one project, do it correctly, then go back and see what the next project might be. But if we don’t do the first project well, there’s no reason we should be looking at five.”

“If savings are lower than projected, that will be the investor’s risk. That structure enables the City to transfer the risk of the project to the investors, instead of the taxpayers as has been traditionally done in the past.  If savings are greater, both the Trust and the investors will benefit, up to a limit.  The investors do not get a security interest in the buildings or the improvements.”

He said that banks, finance companies, charitable foundations and public pension funds might all be possible investors in Retrofit Chicago. He added the Infrastructure Trust itself – a 501(c)3 organization — may also help fund the retrofits.

“The trust’s first $225 million energy-efficiency project, Retrofit Chicago, will split energy savings with investors. But that kind of deal is common and has been under way for years at the Chicago Housing Authority and Chicago Park District.”

On an appearance on the public television show Chicago Tonight in June, Congress for the New Urbanism CEO and former Milwaukee Mayor John Norquist said “there may be less here than meets the eye.”

“What you’re really talking about is a mechanism where you can borrow money and spend on public works processes, it’s basically money you could borrow through normal processes otherwise.”

In his email to Midwest Energy News, Alexander countered that:

It is very difficult to finance individual projects in retrofits. The value of this project is the size, the collective approach, and the transfer of risk from the taxpayer (as with municipal bonds) to the investor. The Infrastructure Trust is really one of the only ways to do a project of this size and scope.  If municipal bonds offer a lower rate, it is due in part to the fact that the taxpayer is taking the risk that the project will deliver the savings.

While each piece of the trio was announced with some fanfare over the past four months, the program is largely an amalgam of previously existing initiatives and incentives which are being tied together and given new publicity and coordination.

“The idea is to shine a light on the good work that is happening and to provide new and existing resources to help buildings achieve dramatic energy efficiency goals,” said Jamie Ponce, Chicago director for the C40 Cities program in conjunction with the Clinton Climate Initiative — partners in the commercial buildings component of Retrofit.

While the Infrastructure Trust is being billed as crucial to raise the funds to retrofit public buildings, the owners of large private commercial buildings like hotels and office towers often have enough money and/or borrowing power to invest significantly in energy efficiency.

But such buildings are still often slow to do basic retrofits, according to experts, because of logistical hurdles. It is often difficult for buildings to undertake efficiency upgrades without interrupting their daily business, and there is often a disconnect between who pays for upgrades and who reaps savings in large buildings with many tenants.

Under the Retrofit commercial building component, which is not affiliated with the Infrastructure Trust, building owners can get free technical assistance and advice from a team including the Natural Resources Defense Council (NRDC); architects Skidmore, Owings & Merrill; utilities ComEd and Peoples Gas; and the Clinton Climate Initiative.

Fourteen commercial buildings totaling 14 million square feet have signed up for the program, which was launched in June, according to the mayor’s office. Improvements on these commercial buildings are estimated to save $5 million annually in energy costs, create about 100 jobs, and represent the equivalent carbon savings of taking 8,000 cars off the road.

“The thing that’s new about this is the city bringing together all the elements necessary to get buildings over the barriers they face to doing these retrofits,” said Rebecca Stanfield, senior energy advocate for the NRDC. “As opposed to there being a lot of different programs all over the place and a lot of confusion from the building owners and managers about which ones really will work for them, we’re figuring out which ones are right for them.”

Stanfield added that many commercial building retrofits are hampered by “split incentives” wherein, depending on the lease, the owner or tenant stands to benefit more from upgrades while the other party may shoulder more of the inconvenience or cost. The NRDC has developed “contractual tools that help to split the cost and benefit between owners and tenants in a way that makes sense for everybody,” Stanfield said.

Henry Henderson, director of the NRDC’s Midwest program and former Chicago environment commissioner, noted in a Huffington Post blog that the commercial component of the Retrofit Chicago program will be aided by a 2007 state law requiring utilities to invest a certain amount each year in energy efficiency.

This year, for example, Chicago utility ComEd is required to invest enough in energy efficiency to theoretically reduce electricity demand by 1.2 percent. ComEd does this through grants to customers and incentive programs for purchasing or installing certain equipment, like compact fluorescent lights.

The utilities must report to the state on their specific efficiency investments, so the demand reduction requirement can’t simply be fulfilled if energy demand drops because of a flagging economy.

The commercial buildings signed on to the Retrofit program include “multiple architects and architectural styles and range in age from 7 to 117 years old” and “in size from 222,000 to 2.5 million square feet,”  according to the city. Participants include major office buildings and hotels and the first office building in the city to have air conditioning – the iconic Wrigley Building on Michigan Avenue, constructed in 1920.

The Chicago Climate Action Plan, adopted under the Daley administration in 2008, promised that half of the city’s commercial buildings (a total of about 9,000) would be retrofitted by 2020, reducing carbon dioxide emissions by 1.3 million metric tons. It is not clear how much progress the city has made toward this goal or whether it is being tracked; Alexander did not respond to a question about its progress.

“This whole effort nests nicely within the framework [the Chicago Climate Action Plan] has laid out,” said Ponce. “There still is a vision for what the city can do to reduce greenhouse gas emissions, and building efficiency is a huge component of that.”

Retrofit Chicago’s residential component, announced Aug. 7, aims to accelerate overhauls of homes and multi-unit apartment buildings, which are on average 83 years old and account for half the city’s energy use.

The program provides free equipment like light bulbs and low-flow shower heads, and grants for retrofits, including to low-income homeowners as part of the existing Tax Increment Financing- Neighborhood Improvement Plan (TIF-NIP).

The program is slated to create about 200 jobs and help homeowners and apartment dwellers reduce their energy costs —  up to $10,000 in savings a year could be expected for apartment buildings, according to the city.

With the Retrofit program the city is joining the Obama Administration’s “Better Buildings Challenge,” which provides technical assistance and public recognition to cities, universities and corporations that pledge to reduce greenhouse gas emissions from buildings. Chicago has pledged to reduce energy use by 20 percent over 24 million square feet.

Nationwide, buildings account for about 40 percent of greenhouse gas emissions, according to a 2005 report by the Pew Center on Global Climate Change, with residential buildings accounting for a bit more than commercial buildings total (20.9 quads compared to 17.4 quads, respectively).

Chicago was last year named chair of the C40 Cities Sustainable Infrastructure Finance Network, and Ponce said other cities are following its lead. Ponce said the city is “gaining traction and really making a difference in terms of reducing costs, stimulating economic development and jobs and reducing carbon emissions…and Chicago is demonstrating leadership with the Infrastructure Trust, which makes it a great city to convene global leaders on the topic.”