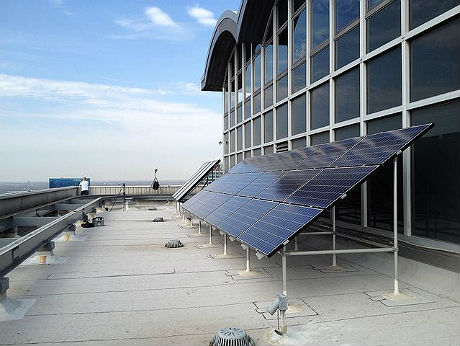 As director of sustainability for the city of Indianapolis, John Hazlett has big plans—and not enough money in his budget to make them happen.

So, he sometimes has to look for creative ways to finance projects.

A few years ago, his counterpart in Cincinnati told him that the Ohio city was paying for solar installations on city buildings by selling power back to the local utility under a feed-in tariff program. Hazlett thought about ways to make a similar solar project a reality in Indianapolis.

At about the same time, the local utility, Indianapolis Power & Light (IPL), was launching a pilot feed-in tariff program. IPL would pay a guaranteed high rate for years for renewable power generated by local businesses and residents.

“I saw an opportunity,” Hazlett said.

Now, after two years of prep work and politicking, Indianapolis’s city buildings are getting some solar panels. But unlike Cincinnati, Indianapolis won’t own them. Instead, they’ll lease the rooftop space to a local solar developer, which will get paid through IPL’s feed-in tariff.

The solar developer, the Indianapolis-based mechanical and electrical contracting firm Johnson-Melloh, will employ local workers, Hazlett said. The installations will be at 30 “highly visible” city-owned sites, he added, including recreation centers, the space between parking lots, and the Indianapolis City-County Building, a large municipal building that houses city offices and courts.

“We see it as local economic development,” he said. What’s more, “we want to use renewables to educate the public more on where we get our energy and how we can diversify that mix a little bit by incorporating renewables,” Hazlett said.

Indianapolis established its Office of Sustainability in 2008 under its then-new mayor, Greg Ballard. And over the next three years, Hazlett and his colleagues spent $18 million on energy efficiency retrofits of 61 city-owned buildings.

These included an $8 million retrofit of the Indianapolis City-County Building that included replacing thousands of incandescent light bulbs with fluorescent lighting, installing a solar thermal water heater, installing a geothermal heat recovery chiller system to help heat or cool the 28-story building, four small wind turbines on the plaza outside, and a dashboard in the building’s lobby where visitor’s can see the building’s energy consumption in real time.

But all the energy retrofits were just the beginning, as Hazlett saw it. “We were interested in doing a more concentrated effort in large-scale renewable development,” he said.

Since the fall of 2011, Hazlett’s team has identified 30 sites to install banks of solar panels. They have contracted with Johnson-Melloh, which will own the solar panels and lease roof space from the city for 15 years, said Kurt Schneider, the company’s cofounder and vice president.

IPL will pay Johnson-Melloh 24 cents per kWh for the electricity, and the company will also get breaks on its taxes for installing renewable energy, Schneider said. The rate is higher than the retail cost for electricity, but also helps the utility avoid the expense of new generating capacity.

Hazlett had hoped to grow the city’s solar program to install solar panels on vacant city-owned lots, including former sites of factories and houses.

“I think we could put solar in more visible areas and create a neighborhood asset,” he said. Solar installations at such sites would “also create a revenue stream to make the property more attractive for neighborhood development,” Hazlett added.

But in late June, IPL, the local utility, announced it was ending its pilot feed-in tariff program next March. And now Hazlett and his colleagues are scrambling to get their contracts approved before the program ends.

According to Hazlett, the future of Indianapolis’s solar program depends on having a feed-in tariff. That’s because the prospect of revenue helped Hazlett convince the Indianapolis City Council to approve the prospects. It helped him convince the facilities managers of various city departments that they should put solar panels on their buildings.

“It helps tremendously to show that we’re bringing in revenue,” Hazlett said. Without that feed-in tariff, that opportunity is not there.”

“It’s a brilliant program,” Andrea Luecke, executive director of The Solar Foundation, a Washington, D.C.-based nonprofit that helps city and county governments find ways to implement solar energy. “It brings green jobs into the community, and clean energy, and it generates high awareness.  There’s going to be a ripple effect through the community,” Luecke said.

“There’s a neighborhood effect” when people see solar working, either on a city-owned building or at a large retailer like Walmart or Target, said Tom Kimbis, vice president of the Solar Energy Industry Association, a trade group that represents solar companies. “They know smart people who they trust have made a decision about solar and it’s working for them.”