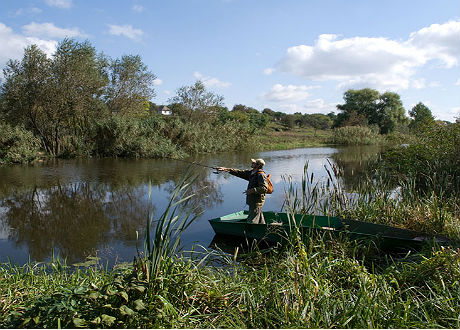 Peabody Recreational Lands is offering this 43-acre plot in Illinois for just over $107,000.

In the market for private hunting grounds where deer graze amongst aspen? Or a personal fishing hole complete with beavers? Fertile farmland for corn and soybeans? Or even a luxury housing development with sculpted lawns and ponds?

Peabody Energy, one of the world’s largest coal companies and one of the country’s largest landowners, is offering land for all of the above — through its Peabody Recreational Lands sales arm and also partnerships with specific developers. In Illinois, Indiana, Colorado and Montana, Peabody Recreational Lands is selling many land parcels which can be browsed with photos and detailed descriptions on its website.

…dense woodlands that will make an avid hunter’s heart race with excitement.  This property is tucked away with access from Fall Drive and provides excellent opportunities for taking trophy whitetail deer and wild turkey.  So if you are that avid hunter who has been looking for this type of habitat, look no further!

Illinois land sold by Peabody also appears to be a bargain, as farmland was going for up to $13,000 an acre this spring and the average price for all land was $7,330 an acre in 2011, according to the Illinois Society of Professional Farm Managers and Rural Appraisers.

As the photos on Peabody’s website show, reclaimed strip mines can be beautiful. In many cases trees and prairie grasses have been planted on back-filled strip mines. Often deep slashes are left in the earth, forming steep ravines that become creeks with banks overgrown in tangled vegetation. Streams have been dammed to form ponds to filter mine waste water and run-off. After the mine closes (or even while it is still in operation), these ponds attract migrating waterfowl, beavers and otters, and they can be stocked with fish. In agricultural areas like Illinois, reclaimed mines can also be transformed into farmland or grounds for hog confinements and cattle grazing.

But critics of the mining industry say the beauty of these lands could be deceiving, both in terms of the actual land quality and the social and environmental effects of coal mining as a whole.

Kim Sedgwick lives near the Industry Mine in central Illinois. For about two decades she has been fighting the mine, concerned that it is destroying old growth forest and the water quality in Grindstone Creek where she loves to canoe and watch Great Blue Herons.

On a hot August afternoon Sedgwick pulled off a country road near property being offered by Peabody. You would never know that it had been strip-mined; the operators of the Industry Mine have been extracting coal in the area since the 1970s.

“I hate to say it, but it’s so beautiful,” Sedgwick said, gesturing at the deep, wide pond with lush vegetation hanging over its banks and a beaver dam built on an intake grate that filtered water through a levee to the creek on the other side.

Sedgwick appreciates wildlife and natural areas, and she notes that mining has prevented suburban sprawl or other development that could rub out all traces of the woods and prairies once native here. But she worries someone will buy the former mine land and fish and swim in the ponds, without considering the possible risk of contamination from heavy metals and other mining byproducts.

Sedgwick, a customer service rep at Western Illinois University and a graphic artist who sells her own greeting cards, has toured land for sale with a Peabody representative and felt she wasn’t getting the full story.

“I could tell he didn’t like some of my questions, so I doubt they share much of the history or what could be in there,” she said.

Peabody Recreational Lands did not respond to interview requests for this story.

Greg Arnett operates the Industry Mine, as president of Black Nugget LLC, which is a subcontractor of mine owner Springfield Coal Company. He takes great pride in the reclamation he does before land is sold. Peabody owns some of the land mined by Springfield and its predecessor, Freeman United Coal Company.

“There’s a lot of interest in this ground out here,” said Arnett. “Adjacent landowners say they want it. They know what it looked like before and they know what we’ve done with it, and they like what they see.”

During a recent visit with Sedgwick, he pointed out acres of native prairie grasses and hundreds of oak saplings he’d had planted on formerly strip-mined land. He said it was specially graded to facilitate good drainage, and could also be revamped as lucrative agricultural fields.

Under reclamation permits mining land must be returned to the same percentage of farm land that previously occupied the site, Arnett said. But the location of farm land and wood land can be changed as long as the total acres stay constant, and Arnett has worked with environmental groups to come up with optimal configurations.

“If you’d have seen the aerials of this area before, it was all dissected with valleys and steep (agricultural ditches),” he said. “We flattened all that out, moving the farm ground up closer to the road and moving the wildlife habitat closer to the creek so we can have a wider corridor for the critters to come through.”

Traci Barkley is a water resources scientist for the Prairie Rivers Network, an Illinois group focused on river protection and advocacy (and a member of RE-AMP, which publishes Midwest Energy News). Like Sedgwick she thinks people could be deceived when buying reclaimed mining land.

“I don’t know how much people understand when they look at that land — what it once was and what it currently is and what happened in between, and to what standards reclamation took place,” she said.

Typically mining companies are required to do reclamation mandated by state and federal laws, including the 1977 Surface Mining Control and Reclamation Act, returning the land to some approximation of its original state or preparing it for an alternative “beneficial use.”

Specific requirements usually vary depending on state laws and a mine’s individual permits. Usually mining companies put up bond money for reclamation as a condition of beginning mining, and once they have completed reclamation to the satisfaction of regulators their bond is released. The land can be sold while still under bond, and the new owners must abide by bond conditions like maintaining a certain number of trees on the property. Once the bond is released, new owners can do what they want with the land, and they also assume liability for any problems that might emerge.

“But over time if the reclamation wasn’t done well it can degrade with erosion, weathering,” she said. “Things covered up start getting exposed and leading to acid mine drainage. If it’s reclaimed for agricultural land, the yields drop in later years because the soil is starting to wash away, there are drainage problems because you can’t put soil back in the same way it began. If it’s strip mining, they’ve often destroyed sections of forest, and it takes a long time to develop that complex ecological community.”

Barkley said she would like to see stricter standards for reclamation and post-mining monitoring of run-off and groundwater, and she’d also like to see more comprehensive requirements for disclosure of past activities and possible risks when land is sold.

She said this is particularly relevant when the waste from coal processing plants or coal ash from coal-fired power plants is stored on or near the site – including in coal slurry impoundments. Usually such waste ponds and piles would need to be dried and capped before land is sold. But without adequate disclosure and monitoring, Barkley and other critics say, future groundwater or soil contamination could result. Without enough knowledge, a new owner might drive fence posts or plant trees that puncture a cap, said Barkley.

“For hunting or fishing there is not so much risk to the person just being on that land, but if they’re consuming what they’re hunting or fishing, there could be bio-accumulation,” Barkley added. “If that wildlife has for years lived around the outskirts of a mine and been drinking mine waste…or fish are in ponds used for treatment of mine run-off, the metals and things associated with mining could be in the food chain. Whether you’re talking about snow geese or wild turkey or deer, it could be a concern.”

Arnett countered that there is no risk from water in sediment ponds, that it is “just dirt” of the type that runs off wooded hillsides and agricultural fields all the time.

In Appalachia, former sites of mountaintop removal coal mining – where mountain tops are literally blasted off and transformed to gently rolling hills and flat plains after the coal is extracted – often become home to golf courses, subdivisions, industrial parks or even prisons. Coal companies tout such uses as ongoing engines of economic development in impoverished areas, though studies by environmental groups and media outlets indicate that only a small percentage of former mining lands become economically profitable.

Along with sales to individual farmers and hunters, Peabody works with developers and government agencies on large projects on reclaimed land.

Forty-five miles southeast of St. Louis, Peabody donated 2,642 acres of reclaimed strip mine for a training ground for the Illinois Army National Guard, where members are trained in skills including hand grenade use, rappelling, fire-fights and “Survival Evasion Resistance Escape Training.”

The Islands of Waterside housing development in Marissa, Illinois – home base of Peabody Recreational Lands – was billed as 756 lots costing between $225,000 and $400,000 and including a marina, restaurant, fitness center and hiking trails.

The planned $334 million development was to be constructed on a former Peabody strip mine on land annexed by the town of Marissa and funded in part through $70 million in tax increment financing (TIF) dollars drawn from the local property tax base. Peabody Energy was partnering with the development firm PGAV Planners.

PGAV’s website said the development offered golf cottages, lake and golf villas, lake homes, and lakefront estates, and called it: “A place with a rare natural beauty in southwestern Illinois…A haven for fishermen and nature lovers…a destination for the entire family.”

But the development apparently was scuttled during the economic crisis. A representative at PGAV contacted this week had never heard of it. Local activists speculated that growing public concern about nearby coal waste storage also made it hard for the development to find financing.

In an email enthusing about the stalled development, a mine opponent wrote: “Well, at least kids won’t have to grow up with arsenic and cadmium in their lakes and yards and fish.”