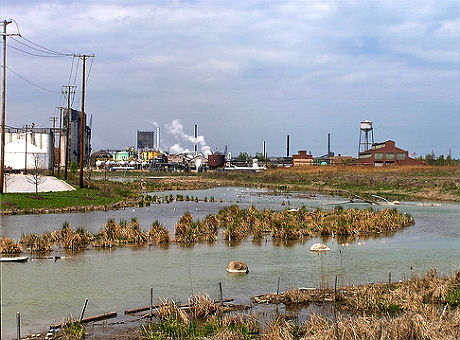 The Chicago neighborhood of Hegewisch is surrounded by industrial land, and, some argue, opportunities for advanced energy. (Photo by Samuel A. Love via Creative Commons)

Hegewisch is a quaint if scruffy neighborhood on Chicago’s southeast side that has an innocent 1950s small town feeling to it, despite being surrounded by heavy industry, crumbling vacant buildings and smelly landfills. Hegewisch and surrounding neighborhoods were once the epicenter of the region’s steel industry, with mills humming day and night, flares lighting up the sky.

The area has fallen on hard times as the steel industry declined, however, and now people are desperate for jobs and economic sustenance. That’s why many local elected officials and residents embraced the Leucadia coal gasification plant proposed nearby; until Illinois Gov. Patrick Quinn scuttled the plan with a July veto of state legislation guaranteeing the company full cost recovery from ratepayers.

In the offices of the Southeast Environmental Task Force in Hegewisch recently, community leaders Peggy Salazar and Tom Shepherd praised Quinn’s veto and described their alternate hopes for the brownfield site of a former coking operation where the Leucadia plant would have been built.

The site will be part of the group’s Energy Tour later this month. In a bid to raise awareness of the Southeast Side’s unique environmental and industrial issues past and present, the task force has for several years been leading regular tours – on coach buses or a picturesque trolley owned by the local merchants association – for tourists, residents and government officials.

The tours are also aimed at showing that the task force – founded in 1989 by legendary local environmentalist Marian Byrnes – is not set on “saying no to everything,” as Shepherd put it, but also promoting sustainable and non-polluting economic development, especially in the energy sector.

“We want to bring people to the table and let them know we’re serious about finding alternative energy projects that create jobs and get properties back on the tax rolls,” said Shepherd.

The task force is working with the Blue-Green Alliance of environmental and labor groups and seeking a sponsor to study ideas for brownfield development and job creation especially related to clean energy, both manufacturing of components and building generation facilities.

“We have a workforce, all the amenities, transportation,” said Shepherd.

The tour will feature what the group sees as best and worst examples of energy production in the area. To the west of Hegewisch is Pullman, once home to the historic rail car factory and company town and now the site (in West Pullman) of a 41-acre solar farm owned by Exelon Generation.

The 10 MW solar installation, launched in 2010, is billed as the world’s largest in an urban setting and generates about 14,000 megawatt hours of electricity per year from nearly 33,000 rotating photovoltaic panels.

Meanwhile just a few miles from Hegewisch across the Indiana border sits the BP Whiting oil refinery, which is undergoing a massive expansion to increase its refining of heavy tar sands oil from Alberta. Though environmental and health leaders have lauded a sweeping consent decree signed earlier this summer mandating significant pollution controls and monitoring, the expansion will still mean increased emissions.

Locals worry about the risk of spills and leaks from pipelines running beneath the area. And they point to the recent recall of 2.1 million gallons of contaminated gasoline from the BP Whiting refinery as an example of the potential for unexpected problems.

The Southeast Side has also historically been the city’s dumping ground, with several major landfills – now closed – and an ongoing legacy of illicit dumping. The energy tour will visit a Waste Management facility where methane collected from capped landfills is used to generate electricity.

What does ‘clean’ mean?

The tour will highlight how it is not always easy to define “clean energy.”

The subsidiary of Leucadia that wanted to build the gasification plant was called Chicago Clean Energy, and backers stressed that the coal gasification technology would mean low emissions, with carbon dioxide captured and piped to the Gulf Coast for enhanced oil recovery. The environmental task force didn’t consider the proposal “clean” in part because it would mean the transport and storage of massive amounts of coal and petroleum coke.

They are not taking a position, however, on another proposal billed as “clean”: startup company Green SEED Energy’s waste-to-energy facility and “eco-industrial park” still in the early planning stages.

As proposed the facility, based partly on one in Kalundbord, Denmark, would use anaerobic digesters to create bio-methane from feedstock including restaurant and institutional food waste, bio-solids from the nearby sewage treatment plant, agricultural residue, and invasive species like the phragmites which are constantly being removed from local marshes.

According to the project website, the bio-methane could be converted to pipeline-quality natural gas or used to generate electricity. Carbon dioxide emissions would be captured and used in a commercial greenhouse onsite.

Task force executive director Salazar, who grew up playing in the shadows of the steel mills and slag piles, noted that the project still raises concerns about diesel emissions from trucking and odors from waste storage.

“We have mixed feelings,” said Salazar. “But sometimes you need to take a risk on something like that.”

The Southeast Environmental Task Force received some support for its tours and outreach work with the area “Calumet Core” initiative’s designation as part of the Millennium Reserve, an Obama administration plan to align federal support with ongoing local and state conservation projects. U.S. Interior Secretary Ken Salazar was in Chicago last month announcing local projects including the Calumet Core.

Community leaders hope the designation and recent increased attention from city and state governments will help further long-standing plans for a “Calumet Corridor” featuring both green space and new clean energy and manufacturing. They envision a solar farm or light industrial park with on-site clean energy generation and co-generation on the brownfield where the gasification plant was proposed.

“These kinds of projects seem to always come back, so we want to make sure there is something else on that site that makes it impossible for them to come back right there,” said Salazar of the gasification plant.

The tour will also highlight two other significant points in the city’s energy transition, in between the glistening skyscrapers of downtown where the tour starts and the coal piles and rusting industrial skeletons of the southeast side. In the immigrant Pilsen neighborhood just southwest of downtown is the century-old Fisk coal-fired power plant, which went dark in late August – closed because of environmental concerns and cheap natural gas prices which have made such archaic coal-fired plants around the country uneconomic.

Juxtaposed against this example of “old energy” is an innovative clean generation project in the city’s gritty Back of the Yards neighborhood, once home to infamous slaughterhouses. Wholesaler Testa Produce Inc. last year installed a wind turbine and 180 solar panels that meet almost a third of the 91,000-square-foot facility’s energy needs, along with methanol fuel cell vehicles and energy efficiency overhauls.

It is the first LEED-Platinum-certified cold storage facility in the country, and the third-generation family owners think the energy cost savings and public relations value will help the company increase their Midwestern market share. They expect to recoup the $24 million project cost within a decade.

“We want people to really think about where their gasoline comes from and where their energy is generated, to see different kinds of examples and judge for themselves,” said Salazar. “We have people get out at the solar farm and at the BP refinery, and in both places we say ‘What do you hear? What do you smell? What do you see? What does this mean for the community where it goes on?’”

For more information or to register for the Southeast Environmental Task Force’s Sept. 22 Energy Tour in Chicago, visit www.setaskforce.org.