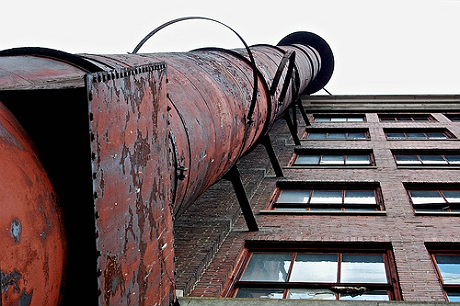 (Photo by vistavision via Creative Commons)

Today, as much as 12 percent of the electricity in the United States is generated by recovering heat that would otherwise go to waste.

This energy is produced in power plants but also in factories, hotels, hospitals and universities that use combined heat and power generation (CHP). But 12 percent is a far cry from the 30 percent of capacity that CHP supplies in other parts of the world like Denmark, Finland and the Netherlands.

So last week President Obama signed an executive order challenging the nation to ramp up CHP by 50 percent within the decade. Obama called for installing 40 GW of new CHP—the equivalent of 80 mid-sized coal plants—in the United States by 2020. He also directed four federal agencies—the EPA and the Energy, Commerce and Agriculture departments—to work together to make that happen.

That much new CHP capacity would save the equivalent of 1 percent of the nation’s energy use and reduce carbon dioxide emissions by the equivalent of 25 million cars, according to a Department of Energy report [PDF] released the same day. And it would save money and create new manufacturing jobs as well. Energy users would save $10 billion, and $40-$80 billion in new capital investments would flow into manufacturing and other U.S. facilities over the next decade, according to the report.

Opportunity for CHP remains ripe in the Midwest, according to a 2008 report [PDF] on CHP’s potential from Oak Ridge National Laboratory.

To find out why the opportunity is there—and what’s keeping it from being fully realized—Midwest Energy News spoke with Dick Munson, senior vice president with Recycled Energy Development, a Chicago-based firm that installs combined heat and power systems.

Midwest Energy News: How does combined heat and power work?

Munson: [There are two types of CHP.] With fuel-fired CHP, you’re actually burning a fuel to boil water to generate electricity. Typically you’re burning natural gas but you could burn biomass, tires, anything to boil water, make steam, and steam spins a turbine. In a typical power plant after you spin the turbine there’s still a lot of steam or heat that’s around, and that’s usually just vented somewhere.

In a cogeneration system, they actually capture that heat that’s spun the turbine and use it for some purpose–drying drywall, drying ethanol, heating metals, what have you. So you’re actually burning a fuel, but you’re using it for two purposes–both to make power and then to capture the heat after you make power for some useful purpose.

Waste energy recovery, in comparison, is where heat is being generated because of an industrial process. Think about the melting of quartz rock to make silicon. They’re going to melt the quartz rock in a couple of thousand degree temperatures of heat that are coming off the furnace. Capturing that waste heat … is a fuel-free, pollution-free energy resource.

You’re capturing something that would have been wasted otherwise, in similar fashion to the wind. If you don’t catch it, it’s just a waste of resource.

Why is this executive order important?

It  shines a spotlight on the potential to advance industrial energy efficiency. It’s been an ignored area. Even though the industrial sector is the largest energy-consuming sector, it has played second fiddle to the residential and commercial sectors when it comes to energy efficiency opportunities.

Secondly, the President recognizes that are potential efficiency gains on both the demand side and the supply side. The demand side I think most people understand—it’s ways of using better motors or better light bulbs or better insulation to reduce the consumer demand for electricity. But on the supply side, I think he highlighted the opportunities to increase the efficiency in the generation of both heat and power. That’s very important for future policy discussions.

Since you guys are based in Chicago, I assume you do a lot of work in the Midwest, right?

We try and look nationally, even into Canada, but the Midwest is attractive because there are so many industrial consumers of energy—many of them are large consumers and quite likely large wasters of energy. We view ourselves as providing an opportunity for them to reduce their costs, increase their efficiency, reduce their pollution, and increase their productivity (competitiveness) at the same time.

Can you talk a little bit about the potential to create Midwestern jobs by installing CHP?

The great part about CHP is that …all of the equipment you have–the heat recovery systems, turbines, et cetera, tend to be U.S.-made. And certainly the installations and engineering and construction are all U.S. jobs. Whereas, for some of the other energy alternatives, there’s some debate and I guess even some disappointment that a lot of, say, wind turbines, are built overseas and then brought here to the United States.

Cogeneration [can also] ensure the continued competitiveness of basic American manufacturers. Because the industry is more competitive and has reduced their costs [by installing CHP], it’s more likely that those basic manufacturing jobs will remain in the Midwest and the United States.

Is there any competition between CHP and other forms of renewable energy generation?

I don’t view it as competition. I think cogeneration and, say, wind or solar can be very complementary. That’s because solar and wind tend to be intermittent energy resources. They produce electricity when the wind is blowing or the sun is shining, whereas CHP tends to be baseload. In other words, they’re basically operating all the time. What cogeneration can provide is the ability to integrate the intermittent resources into the grid.

Could CHP partially replace some of the big coal-fired power plants that provide baseload power?

I think that’s right. The competition from low-cost natural gas is causing a lot of coal plants to retire. And at the same time we’re beginning to see signs that the demand for electricity is beginning to pick up. I don’t think anybody knows exactly where that is going to go. But the thought is that we’re going to need new baseload capacity.  And I think what the president did in the new executive order, and what Governor Kasich, the Republican governor of Ohio, has done is to shine a spotlight on the potential for CHP to be a part of that new mix of energy resources.

Right. What did Governor Kasich do?

Ohio has two things. They have a renewable portfolio standard and they also have an energy efficiency standard. The latter requires utilities to increase their efficiency by a certain percentage by a certain year.

The Ohio legislature, through [Kasich’s] leadership, recently identified waste energy recovery as a renewable resource within that state’s portfolio standard. And at the same time they identified fuel-fired cogeneration as an efficiency resource within that state’s efficiency resource. Both of those open up markets for waste energy recovery and cogeneration.

What is the potential of CHP in the Midwest?

I think the potential in the Midwest is quite pronounced simply because the Midwest remains the industrial heartland of this country. And there’s such opportunity to improve the efficiency of industrial operations. So, I think the Midwest will be the place where the vision that’s coming from both President Obama and Governor Kasich will be best realized.

That is making the assumption, however, that some of the Midwestern states remove some of the barriers that stand in the way of waste energy recovery or CHP—taking steps similar to what Gov. Kasich did. It would be nice to see other states in the Midwest doing something similar.

How could the region benefit if CHP was scaled up?

On the economic side, it will reduce the cost of energy that manufacturers have to pay, which will make them more competitive with their international competitors. That’s good for the Midwest because it remains the industrial heartland, and we’d like to continue to have manufacturing be vibrant in the region. And any way we can increase the competitiveness of manufacturing is good for the economy and certainly good for jobs.

At the same time, any way we can increase the efficiency of power generation, it will also have the twin benefit of having an environmental benefit because it will reduce pollution—both conventional pollution as well as greenhouse gas emissions.

What policies would help the Midwest scale up CHP?

There are a couple of different options.

Ohio is an example where they said that, in the future, utilities need to get 20 percent of their power from a mix of renewable resources. That would now include waste energy recovery. That’s one way to create a market.

Other states such as California would adopt feed-in tariffs that say the utilities need to buy [renewable energy], like cogeneration or others, at a set price over a long period of time–usually a 10- or 20-year contract.

A third approach that some are discussing is to allow utilities to be partners with cogeneration developers [like Recycled Energy Development]—either in financing or in the engineering process.

They would then be able to include whatever investment they make in these cogeneration facilities as [part of] their rate base. That is the pot that is available [for utilities] to make a profit on. Currently, these types of investments are not put into that rate base pot.

Is that happening anywhere?

There are lots of discussions going on and a few pilot projects about to get off the ground, but [otherwise] I’m not aware of it. I suppose the closest would be Ontario, Canada, where they have created something that they call the clean energy standard offer program or CESOP. That’s similar to what’s being proposed.

CESOP calculates what utilities would pay if they were going to go out and build their own power plants—their own natural gas plants or a new coal plant. And then it says, if anybody is able to either match or beat that price, they should also be allowed to compete and get a long-term contract for the power they would generate. In Ontario, utilities [can] realize some savings because the power we developed would be cheaper than what they would pay otherwise.

What are the major barriers preventing more CHP from going in in the Midwest?

I think the major barrier is just ensuring that there is a market for CHP power. If I’m a drywall manufacturer and my cogeneration unit is providing enough heat to meet all of my drywall manufacturing needs, I might have enough excess electricity that I need to sell some of that power. At the moment, our regulatory system makes it very hard to sell that power. That’s largely because we provide the utility industry an incentive to build their own power plants and transmission lines and not to buy power from other people.

So I think we need to figure out a way to [give] utilities an incentive to advance cogeneration. Some view cogeneration being done, say, at a drywall manufacturer, as something that would take away one of their customers. And therefore they’re not happy about it and will find ways to try to block it.

If we as policymakers can figure out a way to make it a win-win, both for the utility as well as the manufacturer as well as the CHP developer, I think we’ll see a lot more cogeneration being developed.