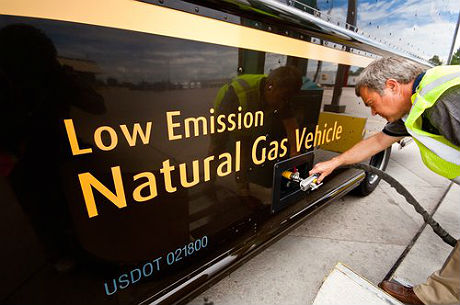 A UPS delivery truck fuels up with compressed natural gas. (Photo via NREL)

STATE COLLEGE, Pa. — Automakers see a rare opportunity for natural gas vehicles to break into the market, but they continue to see the biggest opening in trucks and buses, not passenger cars.

For these cars, the engineering and infrastructure challenges remain too daunting, auto executives said at a conference here last week.

But for fleets, they said, cheap shale gas has strongly abetted the business case for using natural gas.

For the moment, fleet managers intend to take a hard look at natural gas. The vehicles have been around for decades, but automakers have made them available only in small batches.

The main reasons: Fleet operators were unsure how they would refuel the vehicles. And natural gas vehicles cost more than the diesel models, so it could be hard to financially justify the switch.

Today, the panelists said, the tide has shifted. All of the major truckmakers are offering natural gas models, and some have “bi-fuel” models that can also run on gasoline. The price of natural gas has plummeted thanks to U.S. shale drilling, shrinking the time that it takes for a natural gas truck to pay for itself.

Those shifts could even reach the long-haul trucking industry, said Sam McLaughlin, an engineer at Volvo Powertrain North America. In recent years, fleet managers were deterred by the extra cost of the trucks — $30,000 to $50,000 more than diesel models — and the lack of fueling stations on the interstate.

“Both of those concerns are — if not already being addressed — they will shortly be addressed here, probably by the end of this year,” McLaughlin said.

The price hasn’t hurt, either. Liquefied natural gas, or LNG, the preferred fuel for long-haul trucks, cost between $2.60 and $2.80 in June, when measured in terms comparable to diesel. According to the Energy Information Administration, diesel cost $3.76 a gallon, with taxes, in June.

Businesspeople and energy experts gathered here, just miles from active production in the Marcellus Shale, to find new uses for natural gas. Their own experience has been instructive: As one of the low-cost regions in the United States, the Marcellus has experienced a boom and retrenchment in drilling.

Now, U.S. natural gas prices look poised to stay low for decades, prompting industries to think about how they can make use of it.

In transportation, one question is where the benefits of natural gas dry up. Dick Kauling, powertrain engineering manager for gaseous fuels at General Motors Co., described the company’s struggles with whether natural gas can work in a passenger car — and whether that’s a battle worth fighting.

If the car uses CNG, its tank will be four times the size of a gasoline tank, using today’s technology. If GM builds a car from scratch — building around that tank — then it can be done, he said. But whether it is a car people want to drive, and one that pays back GM’s investment, is a tougher question.

The Obama administration has targeted the natural gas tank as a critical technology to develop, saying that CNG cars will remain limited without a smaller, more efficient one (EnergyWire, July 20).

For larger vehicles, which have more space to hide the tank, it doesn’t appear to be a problem. Coleman said the F-250 pickup, run on natural gas, makes up its extra cost in just over three years. The F-650, a medium-duty commercial truck, recovers its extra cost in less than one and a half years.

“These numbers are rounding errors in the automotive industry,” he conceded. But increasingly, major companies like AT&T, UPS and Frito-Lay are calling.

“When those companies come in and they’re asking to buy vehicles by the thousand, we take notice of that,” he said. “And we start designing vehicles for them.”