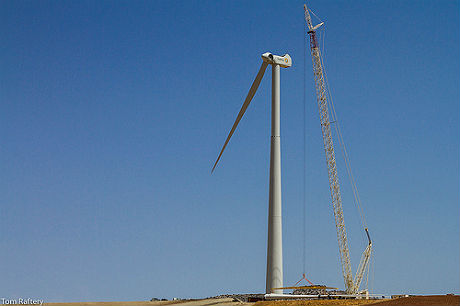 ELWOOD, Ind.—Every week this fall, 170 workers will toil in the farm fields north of Elwood, Indiana. But they’re not growing corn or soybeans.

Instead, a major construction project is under way on these 1,700 acres of central Indiana farmland. The goal: build more than 100 wind turbines, each 30 stories tall, and get them running by midnight on December 31, when the wind production tax credit expires.

On Monday, the workers at the Wildcat wind farm looked like they had their work cut out for them. Just six of the planned 125 turbines were completed. Huge steel towers gleamed from nearby cornfields, like giant beanstalks, while gray blades, each the length of a 15-story building, sat on the ground like wayward gliders.

At a large gravel-lined construction site, Mike Behringer, construction manager for White Construction, a Clinton, Indiana, company that’s building the first phase of the Wildcat wind farm, explained to a small crowd of journalists what it takes to build a large wind farm like this one.

What it takes, Behringer said, is a whole lot of construction.

Access roads have to be built into farm fields; foundations have to be excavated. To hold up a single turbine it takes 400 cubic yards of concrete and 36 tons of rebar—meaning the entire wind farm will use enough concrete to pour a 3-foot-wide, 4-inch-thick sidewalk from central Indiana to St. Louis. Each of the five sections of each 300-foot tower is transported to the site on a semi, then stacked in place with the sort of crane used to build skyscrapers.

The nacelle—a fiberglass-encased box with more than 70 tons of equipment inside, including the electricity-generating components of the turbine—is placed atop the tower. Then each of the 160-foot blades must be mounted on top of the tower.

All this work means jobs, and lots of them, Behringer said. One hundred seventy people, including iron workers, crane operators, laborers, and linemen are all employed building the first phase of the Wildcat wind farm, which will have the capacity to produce 200 MW of energy.

But the work on the Wildcat wind farm could come to a screeching halt on December 31. White Construction is racing the clock to get all 125 turbines built by then so the project’s developer, Chicago-based E.ON Climate and Renewables, can qualify the turbines for the 2.2 cents tax credit for every kWh of electricity produced.

Behringer said he’s “very confident” that White will meet that deadline. But the fate of the second, third, and fourth phases of the planned project, with more than 550 MW of additional capacity and more than 200 additional turbines, rises and falls with the wind production tax credit.

Unless the tax credit is renewed, Behringer said, “there are no projects and no jobs from the beginning of the year on out.”

Jobs on the line

The workers building wind farms like the Wildcat project are not the only ones employed by the industry. Far from it, said Tom Conway, Jr., regional program manager for the BlueGreen Alliance for Indiana and Illinois.

The same story is repeated nationwide, according to a report released yesterday by the Natural Resources Defense Council (a member of RE-AMP, which also publishes Midwest Energy News). If you count the supply chain, each 250 MW wind farm project will support 1,079 jobs in manufacturing, construction engineering, sales, management, and other fields. About 75,000 Americans already work in the wind industry, the group reported.

And there’s room for more suppliers, Noel Davis said at the press conference. Davis is the chief executive officer of Vela Gear Systems, a company that plans to manufacture large industrial gear boxes for wind turbines near Marion, Indiana, just a few miles from the Wildcat wind farm.

Right now, there are 2,000 wind turbines going in each year in the United States, he said. They’re being built in part to meet the requirements of state laws that require a certain percentage of electricity be generated from renewable sources within a couple of decades. “That’s 2,000 30-story wind turbines each year for the next 20 years. “There’s a huge market,” Davis said.

However, European countries and China can and do make wind turbine components, and their governments subsidize the wind industry. That means that without the production tax credit, “it’s not a level playing field,” Davis said, and U.S. wind jobs could migrate abroad.

Wind on the dole?

Conservative groups have spoken out against extending the wind production tax credit. In a letter to Congress, Americans for Prosperity and 63 other conservative groups argued that the wind industry has become too dependent on the production tax credit. Americans for Prosperity was launched by David Koch and another board member of Koch Industries, which operates oil refineries and about four thousand miles of oil pipeline.

Mitt Romney has also come out against extending the wind production tax credit.

When the wind production tax credit was discontinued in 2000, 2002, and 2004, wind installations dropped between 73% and 93% [pdf], and with them all the associated jobs, according to the American Wind Energy Association, a trade group representing the wind industry.

“When AWEA says 37,000 jobs are threatened because of the loss of the production tax credit, these are real jobs and real union members whose livelihoods are threatened,” Conway said. In fact, with the PTC extension in doubt, already orders for components have slowed and plants in Pennsylvania, Colorado and Iowa have begun laying off workers, Conway said.